Searching for tea in Seoul

I'll write more about what I actually found--review of two different teas, one black tea and one yellow--but this is more a travel guide part about where the search for tea in Seoul led.

I don't mean to even imply Korean tea has anything over Japanese teas for emphasizing that search in the last post, or starting with it here (I just got back from both countries).  Even accounting for varying preferences that would seem silly.  Tea from Japan is justifiably famous, and it doesn't all taste like you've brewed seaweed.

In both countries I focused more on destinations like Disneyland so this also isn't meant as a guide to what someone else might find, if they put more ground work in.  And it goes without saying, Japan has an incredible look and feel, and the people there are great even if a bit reserved.

I had the best luck wandering around Insadong, a tourist / art / traditional area. It would take a full day to really do that type of search any justice at all but in an hour I found a few tea cafes and two shops selling loose tea (actually one was pu'er, compressed Chinese tea; close enough).


I bought a Korean black and yellow tea, so I did find interesting types. The downside: I paid through the nose, about as much as I've ever paid for tea, $30 for 40 grams of tea for one, if I'm remembering right (one third that price or less is more standard, for decent tea).  I didn't have a great feeling about grabbing the first teas I saw, of course, but that was how timing went (I did spend two full days at amusement parks though, based on someone else being a higher priority than my tea habit).

A later check on teas in a higher end grocery store, under the O'Sulloc brand I was supposed to check out in their cafe, turned up even more expensive teas, so maybe I wasn't missing so much.  Would've been nice, though.

I didn't go to any of the other places I'd mentioned in the reseach post because I didn't have time to spend on running down shops; just enough to go take a look (it was a family vacation).

I'm not completely sure what to make of it but there seemed to be a lot of tea cafes in Seoul compared to tea shops.  Walking into a few--looking for the other kind of shop, given the tight time-line--and browsing the menus turned up a second interesting point:  they were selling more tisanes (herb teas, if you're ok with that expression) than tea made from tea leaves.  Along the same line, Wikipedia lists lots of things in an article on "Korean tea," just not any made from the camellia sinensis plant.

Nothing wrong with tisanes, to me, it's just a phase I was on years ago, and now more into the other kind of tea.


Another online contact mentioned another tea store I didn't make it to (in addition to the others I didn't go to in the last post), Ancient Futures Tea Lounge (their Facebook page), but according to them they specialize in Chinese teas.


In summary, Koreans don't seem to drink tea as they do in Japan or China, which explains the emphasis on herbal teas / tisanes. In retrospect that makes sense; it's too far north to be ideal for tea production. Japan isn't much further South--the Southern parts; the north is at the same latitude--but obviously tea demand has to do with culture more than what can grow everywhere. Since the supply is limited and there is some demand the cost is high, and I saw teas selling for even more in a higher end grocery store. More than a dollar a gram for tea is a bit excessive, to me, but to put it in perspective it still costs less than a Starbucks habit.


Tisanes in Seoul--there's a market for that


Based on another recommendation I checked out an interesting traditional medicine market, but there was only a bit of loose tea being sold there, not the compressed disk teas I'd hoped to find (dok-cha). Here's a link about the Gyeongdong Market, which seemed a great place to buy all sorts of other things, like fresh ginseng:

The look of that market wasn't what I expected, a bit more of open stalls than medicine shops, but it's a familiar format here in Bangkok.  Usually in Bangkok those places have an unusual smell to them (as expected, for having fresh fish sitting out with a little ice to preserve it) but this market smelled like potpourri mixed with food spices, only a lot better.


I never did find the Korean compressed tea disks I was looking for, dok cha (pictures references here).


Another online contact mentioned a tea expo / convention as the best place to find and stock up on Korean teas.  Here is a link about one this June (too bad I won't be there).

As I recall from the conversation the point was that better Korean teas are available in places like higher end grocery stores or specialty tea shops but due to how supply and demand balances out these can be quite expensive (which was my experience), and the range of offerings making it to such markets could be limited.  I've been to this type of event in Thailand but Thai oolongs tend to be a bit consistent, so although it was a great place to buy a lighter oolong it didn't seem to get much further.

Of course on-line sales is another short-cut I'm skipping, but based on lots of Google search it might work a lot better if you can read and type in Korean.

Which leads to one other possible outlet, grocery stores (right--somehow that never works for decent tea, maybe better in China or Japan but even there better to go to a shop).

These teas and others I didn't photograph show part of the problem:  these are some expensive teas.  Both of these on the right come to close to $40 per 50 grams worth, and there's no guarantee it's even "good" as mid-range teas go.

It was the same for the O'Sulloc brand in a different store; maybe decent pricing for a very open tea budget but I'd just been to Japan where the scale was sort of different (hard to factor in quality, of course, to some extent even when tasting the teas but much more so for looking at a package in a foreign language).  Glass jars are nice for getting a look, and probably a great storage solution, but nothing like drinking a sample.

One more step towards just travel blogging, right.  The obvious way to get around Seoul is to use the subway, and get a tourist SIM (phone card) with data support and let Google Maps take you the last few blocks, after research has already "starred" where you want to go.  Easy peasy lemon squeezy, as my son says (right, some British school influence there). 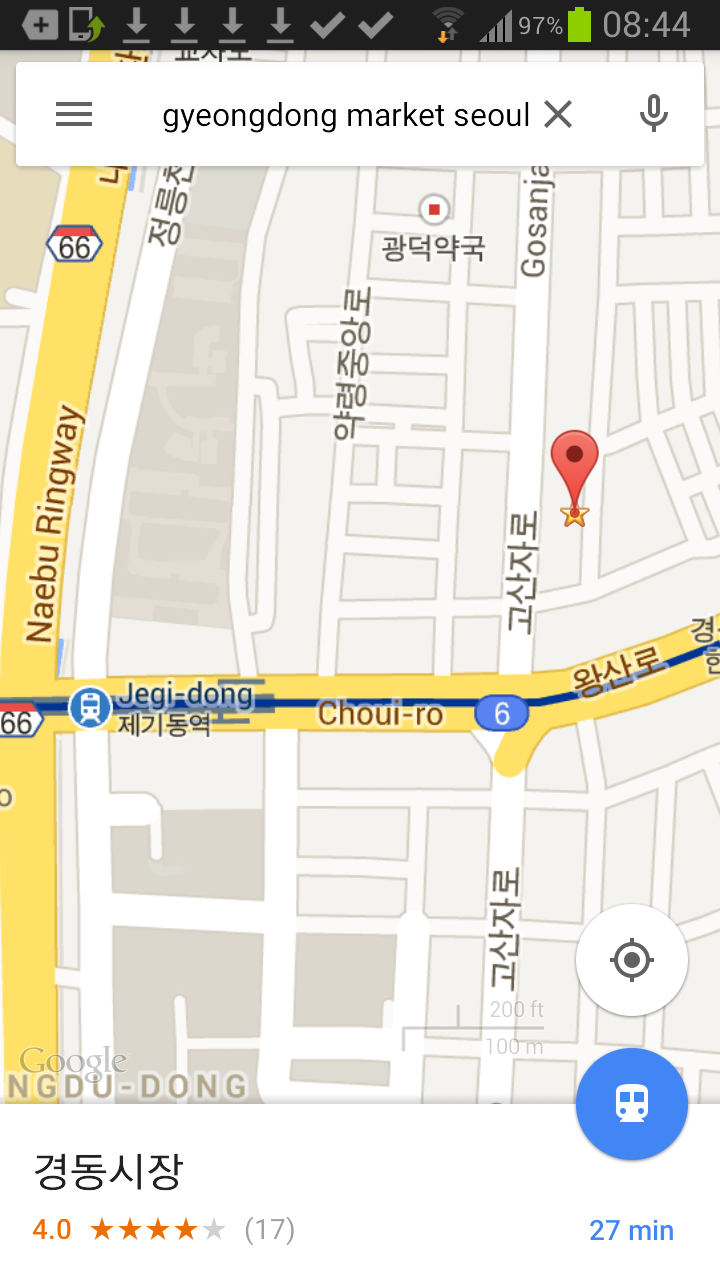 Looks pretty easy, right?  Zooming in a level in Google Maps even tells you which door to get off at the station, and more street names, so how could you go wrong?  Easy.


In fact I think I was there but may not have been.  I saw information signs in the different intersections (helpful, especially the part about including some English text) that actually conflicted each other about where that market was.


People on the street standing less than a block away seemed to have no clear idea where it was, and pointed in different directions (nice of them to try and help, though; people in pretty much all countries are great about that).  To top it all off there was no way a sign was going to say "Gyongdong market" in English / Roman lettering to make it clear you are there. 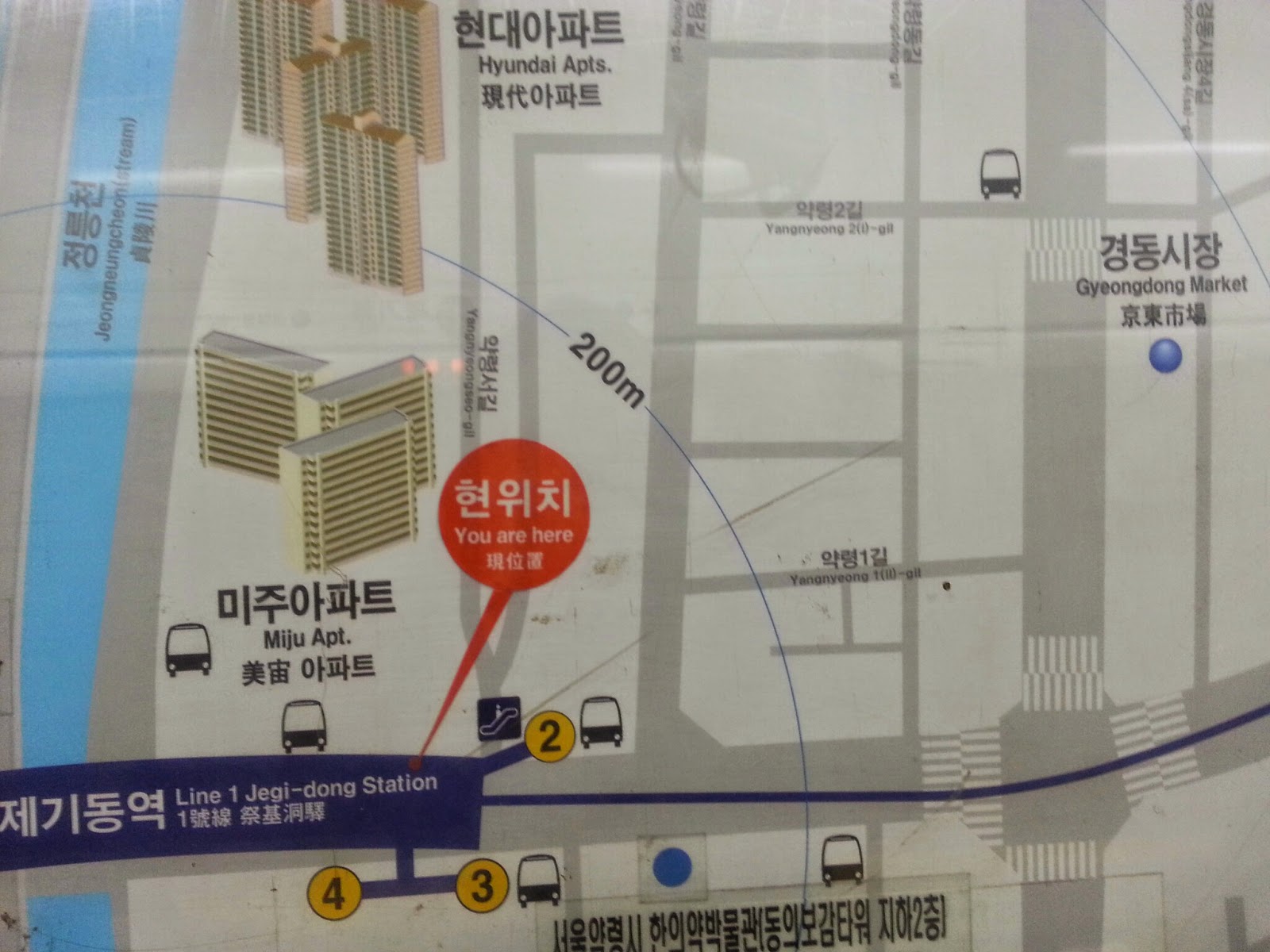 The subway map version:  again really clear (nice work adding some English words; you take that for granted until it's not there).

One interesting semantic point ends up being a stumbling block:  what is a "market"?

Here in Thailand it usually refers to a group of lots of stalls in one building area, usually with a bit of an industrial look to it, or maybe even vendors selling things outside in stalls without boundaries or maybe even tables.  A "night market" might just be sidewalks or blocked off streets.


I was thinking of the shops areas in Chinese markets, like a very old version of a mall, similar to Korean clothing stores in a different part of town.  Unless I'd missed it this was a little more open, in the earlier pictures, with distinct "stores" and a common roof, but still not really shops.

If the mission was wandering around Insadong then just finding the main street and wandering in would do the trick, provided spending one day and taking many steps wasn't an issue (both things I would love).


One co-worker who was in Seoul just now when I was said she thought the next neighborhood over might be a better place to look (based on living there for a year--but then she's not into tea).  And there's the problem:  it could always be just one more more block to find the holy grail, the perfect shop, with a selection you just can't believe, great pricing, friendly staff tasting the teas with you, etc.

More on how that goes in a different country in a later post on the same type of search in Yokohama, Japan.


The final conclusion:  do research, ask Google, network and get advice, and walk a lot, but most of all be lucky.  If you can't enjoy the sights and smells along the way for not finding what you're looking for then you should just be searching online anyway.