Happy 2nd birthday to this blog 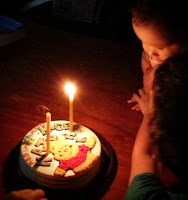 It's been two years for this blog!  That's easier for me to keep track of than my wedding anniversary because I started just before my daughter was born.  The idea back then was that I wouldn't have time for such things as writing later, and I'd been researching teas and drinking different ones then.  That was not long after a second trip to China, where I'd bought a lot of tea, almost randomly, and it was time to start sorting out what I was drinking.


These abstract theme posts don't seem as interesting as content closer to the subject so I'll say a bit about what I've learned in two years and be done with it.  I mean aside from what's already covered in these other posts; countless details about different teas, and an early start on identifying what tea tastes and feels like.  A chocolate blogger contributed in a recent post and gave a really clear and thorough explanation of palate development, preference changes, and subjectivity issues, all themes I keep coming back to.

Common sense goes a long way.  The opposite of what you always hear, right, that there is a large set of ancient Chinese secrets one needs to learn to really make better tea.  There's something to those fine details, more about optimizing technique once one gets some basic brewing steps and preferences down.  Someone really could start there, and work backwards, learn the finer points first and then figure out what basics they extend from after, and oddly enough it seems to work that way sometimes.  As with most things it's as well to not throw ordinary reason completely out the window.


It's an experience.  Really what else would it be?  Judging by courses and degrees maybe it's an academic field of study instead, or about a credential level, and of course it relates to a vocation for many.  If one becomes a bit burned out on the sales pitches that turn up along with background information it's helpful to remember that all the tea wouldn't make the trip here without it being a business.  In this sense "here" means anywhere, unless you are a tea farmer, or live across the street from a plantation, and even then it really needs to be a viable business for someone to keep on growing and processing it.


Some people take tea way too seriously.  Kind of strange coming from someone that wastes the time on it I do, so I guess I just mean it related to people that take it all differently than I do.  This seems to contradict the next idea:


There are lots of approaches to tea, and no one of them is right.  Better to keep an open mind and try different things, to learn from people that see it differently.  It's ok to never drink tea blends or certain types, or to never brew Western style, but maybe better still to keep an open mind.  Someone might hate the idea of blending tea with anything, or even mixing the same types to balance attributes, and then later figure out that they really love masala chai (or Earl Grey; whatever it happens to be).

Some degree of contradiction in the experience of tea is fine.  Just like related to being married, just not that much inconsistency.  Rules and conventional wisdom play a role, and so does breaking those rules.  One tea mentor said to watch out for people that make absolute claims related to tea since preferences and other natural variations tend to make the fact of the matter more complicated than that.  It's not directly related to the same point but he also said to be wary of a shop selling too many kinds of tea, but that's not a hard and fast rule, just something to consider.


One warning sign related to tea expertise is someone claiming to be an expert.  But of course they really could still be one.


I recently read a blog site where the author said the best way to learn tea knowledge is to read classic sources, of course only available in Chinese language, implying she was the go-to expert you really needed to listen to.  The last blog I read that in I didn't get around to reading again, and I recently noticed that vendor went out of business.  The most knowledgeable sources seem to down-play being an authority, realizing there is more to learn than any one person knows.


Of course there is something else going on with people being trained and working as a Tea Sommelier; the field is expanding to include roles for people recommending tea for a living, so it is necessary for some people to step forward and claim that level of knowledge.


You can't judge a tea type by one tea.  How many then?  One relatively ideal example of the type is fine, which you would need lots of experience to recognize as such.  Those ideas make a nice circle.  Even after one has pinned down the ideal, paradigmatic type--as much as there could be such a thing, but it typically doesn't work that way--something else could still crop up, variations and such.


The experience of tea changes over time.  Kind of obvious, right?  Preferences are going to change, palate development, etc., but perhaps more interesting is that different aspects become more interesting, like the feel of the tea, or aftertaste (hui gan, which doesn't exactly mean aftertaste; here is an interesting article that compares such terms to wine, which may make more sense if one has been through a lot of tasting that too).


I'll say more about that as I follow the path further; I'm not so far along just yet myself.  In a way it's a shame for people that get hooked by trying a really good tea early on, and jump in tying many other exceptional types, because someone experiencing the whole range from tea bags to mid-grades and on could spend many years continually trying better teas.  Of course they would still go through trying them with a changing palate, comparing different qualities and picking up new dimensions, so a lot of the same would still apply.


It's not just about tea.  For me the experience of drinking tea and knowledge of tea are two separate but related things, but for this point I mean something else again.  It's also social.  This point gets a bit strange since my tea connections are almost all online, so just I have the outsider's vantage through messages.  Funny how the conversations and groups and the rest work out, mostly nice enough.  If you like you could join a Facebook group that I help moderate to talk about it online more yourself, but aside from the issue of most such groups being a little bit quiet there are lots of them to choose from.


Plenty for one list!  Thanks to those that read this blog, for taking some part in exploring with me, even if you never did get around to commenting on your own experiences.  I'm open to talking about tea, sort of my thing to do that, so feel free to say hi, and by all means feel free to help out by flagging it when I've said something that's clearly wrong.  It's a learning process.  And more than that about one nice cup of tea after another.
Posted by John B at 1:25 AM