Tea Side Ruan Zhi Oolong from Myanmar, plus a cultivar mystery


My first tea from Myanmar!  It's a Ruan Zhi oolong from Tea Side.  I spent some time once trying to find tea from there but it didn't work out.  In the end it was a little anticlimactic since this is a decent version of a very familiar type of tea, but not all that different than the same type from Thailand or Taiwan.  But it is from Myanmar, so interesting related to that.


The tea is like any other # 17 / Ruan Zhi from Thailand or Taiwan:  smooth, rich, sweet, full-bodied, with a light and smooth base flavor profile.  These teas brew to a golden yellow color, not quite as bright yellow as Jin Xuan does.  That base component is like the full-bodied aspect of chamomile, or maybe a little like dried hay, with a bit of mineral.  The mineral element isn't as pronounced as these can be from Taiwan (for other oolong types), a flintiness or limestone aspect, a bit softer like Thai versions typically are, maybe just a little different.  One subtle spice-like component is nice but hard to pin down; it reminds me of one part of nutmeg, part of the flavor base of that spice, not the sharper and spicier part.

The flavors are clean, the body is good, with a nice taste profile, all depending on preference for lighter oolongs, or else these might not seem so positive.  It seemed there could have been a little more complexity to the flavor range, there was just a bit of floral tone hiding behind those other aspects, not so much specific standing out, but that's how the general type usually goes.


Similar oolongs from Taiwan are not so different.  The main difference--in my experience, which isn't so extensive it should serve as a last word--is that many oolongs from Taiwan tend to have a slightly fuller feel to them, and a more substantial mineral profile that underlies the more "top end" flavors.  This tea was nice but it could have had a bit more flavor complexity.  Since it was described a bit differently than it came across it seems possible some of those aspects faded a bit during storage somewhere along the line.

It would be easier to be even more positive about this tea if I hadn't burned out a bit on similar lighter oolongs due to trying so many from Thai sources this year.  I was looking for different versions of Thai teas (although the standard versions are nice), and eventually did, from the same vendor that provided this sample, Tea Side.  There are several posts here about another great black tea, Jin Xuan based, pu'er-style teas (Thai hei cha), and two completely different versions of Oriental Beauty, the type where insects bite the leaves to improve the tea characteristics, some really amazing teas.  But if this tea matched someone's natural preferences better they might well appreciate the positive aspects more, that smoothness and the complexity that was there.


One interesting point relates to what it really is, since # 17 is not really Ruan Zhi, per some later research, even though it's universally referred to as that in Thailand.

Thailand produces most of two types of oolongs:  #12 Jin Xuan and #17 Ruan Zhi (at least sold as such), both universally lightly oxidized rolled oolongs.  Jin Xuan is lighter, sweet, with a milky effect, not exactly like Cremora (artificial coffee creamer powder), more subtle, but the range of the effect differs.  Ruan Zhi, or whatever it actually is, has a hint of spice to it, but not so strong it's easy to identify, with a slightly fuller body effect.  This tea is not so different than many other versions I've had from Thailand, maybe with some flavors shifted just a little.


On oolong cultivars from Taiwan:


Best to be clear at the outset:  per most references I've reviewed TRES #17 (Taiwan Tea Research Station and cultivar / plant hybrid name) isn't called Ruan Zhi, so that name is wrong.  #17 is Bai Lu.  Ruan Zhi is harder to place, although it is explained differently, so perhaps not just an alternative name.

To begin, what difference does it make if the tea is a Ruan Zhi or a Bai Lu, or if it were a Qing Xin?  What's in the cup would be the same, along the lines of "a rose by any other name would smell as sweet."  Different tea plants do produce very different teas, but it seems to make more difference if you are trying to buy something in particular and aren't sure what the vendor is selling.

All teas sold as #17 here in Thailand are quite consistent, so even if there is an inconsistency or error related to the naming (if it's really Bai Lu, as it seems it might be) it's still really what a consumer is expecting, at least based on having tried most of the similar teas here.

I guess the same is true of tea sold as Dong Ding, but from Thailand.  Maybe that makes no sense, being the name of an area in Taiwan, whether they've went through the paperwork of protecting the region name or not, but the tea is at least what you'd expect based on having tried other Thai versions of Dong Ding here.  But I digress.

This would be a good point to get back to references, to what those names and cultivar types are supposed to relate to.  Here is a good summary table of cultivars from Taiwan from the Tea Db site: 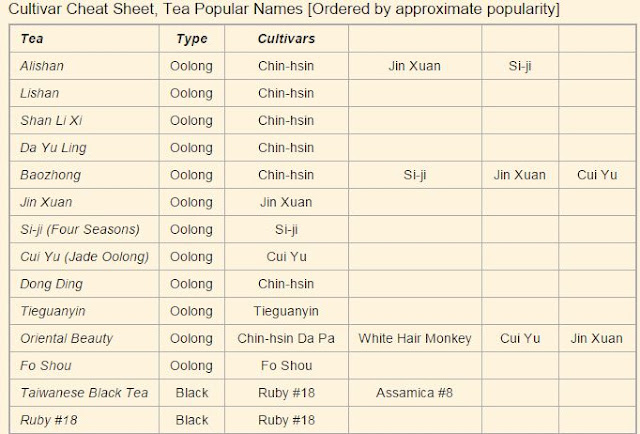 Ok, not so much help there since there is no #17, no Ruan Zhi, and no Bai Lu.  Through a process of elimination they are claiming that these aren't common plant types, which may or may not be the case, but we're really talking about two other countries more anyway (Thailand and Myanmar).  But still interesting; according to them a lot of those regional teas are made from Chin-shin (more typically expressed as Qing Xin), or at least should be according to this.

One interesting post about teas from Taiwan was a guest post by Kevin Craig in the Tea For Me Please blog, which said this:


The other TRES development that I will focus on is the Bai Lu, or TTES 17. TTES 17 is a mix of the TTES 1958 and TTES 335 bushes... The Bai Lu is incredibly aromatic. Generally produced on the lower side of the oxidation scale, Bai Lu boasts some fruity and floral flavors, a rich aroma, and a lively yellow liquor color...  The Bai Lu, also known as Ruan Zhi, is also known to be cultivated in Thailand and in Anxi county, China. The cultivar may be the same, but the tastes of the teas from each region differ based on the terroir.


All quite interesting!  And the parts on other teas is as well, worth a look.  The Teapedia site says the same thing, but then to some extent different references use common sources, so any number of them being the same doesn't necessarily make them right, and some of those types of references get adjusted over time.

The TRES / TTES dual name references get a bit odd, but a comment by Peter Pocajit on a discussion about that on LinkedIn claims to resolve an apparent conflict:


Before 2003 it was called TTES (Taiwan Tea Research Station).
Since 2003 it's TRES (Tea Research and Extension Station).


And the main TRES website also says this here, really a more authoritative source, so that first reference to a comment from Peter just clarifies that people also talk about such things in LinkedIn groups.  One would think another click or two would lead to the definitive list on that TRES site and all would be settled, but it seems to not be there.  There are links to 13 publications I didn't read all of there, #21 through #33, but one of the first 20 probably had what I'm looking for instead, the basic cultivar list.

There is one more relatively authoritative database being developed by the World of Tea site (by Tony Gebely), which says #17 is definitely Bai Lu.  But Ruan Zhi doesn't turn up at all, so it's not clear if it's a different cultivar or only a second name for Bai Lu.

A Google search indicates Wikipedia weighs in, although this definitely isn't the best source for the last word:


Ruan Zhi (軟枝; pinyin: ruǎn zhī; literally "soft stem") is a variety of oolong tea. The tea is also known as Qingxin (青心; pinyin:qīng xīn; literally "green heart") and as # 17. It originates from Anxi in Fujian province, China. The taste is light and is often referred to orchids. This tea variety is used to produce famous highland oloong teas such as Dong Ding, Oriental Beauty, Pouchong and Ruan Zhi.


So that definitely doesn't match everything else, especially the last part, but this still may shed light on what's going on.  Back to the Teapedia reference, which had suggested Ruan Zhi might be another name for Bai Lu:

Qing Xin (green heart), some claim it's a Ruan Zhi, some that it's a different varietal. Other names are Zhong Zhai and Zhong Cha.


The tea cultivar database entry on World of Tea does back this up (the claim that Ruan Zhi = Qing Zin, not the other version that it's really the same as Bai Lu):


More contradiction.  We're almost back to asking if any of this really matters.  In a limited sense it does; either all that #17 is really one of the most common tea types produced from Taiwan, a relatively original version that may have came from Anxi, China, or else it's a later hybrid.  The two really are different teas, aside from confusion over names, and it's an interesting case that one of the main types of tea sold in Thailand, and now also Myanmar, is probably identified incorrectly, sold by two different designations that don't match each other.

I asked a tea contact on Facebook, Thomas Smith, who had lots to add, information which he said originally came from one of the directors of the TRES agency (his instagram profile is where he seems to post most review content, with really, really detailed descriptions of teas):


Ruǎn Zhī is the predecessor group of tea plants that Qīng Xīn Wūlóng came from. It is a bit problematic referring to it (or Qīng Xīn in some cases) as a cultivar, as that word should be exclusively applied to clonal plants while Ruǎn Zhī has been established and spread through seed, with  the derived Qīng Xīn also sometimes being spread by seed. Neither have an assigned Táichá number, because even if Qīng Xīn essentially was borne out of the Fujian Ruǎn Zhī seed stock in Taiwan it is not a registered clone.

The number only applies to the tea if from the Taiwan Tea Experiment Stations (no tea registered by them is supposed to ever leave the ROC, BTW). Ruǎn Zhī is what I'd put bets on...  Technically most of the clones out of Taiwan can be referred to as it since it is a seed propagation plant and the clones fall within its range of variance. I don't know the full pedigree on TTES No. 17, just the two clones that were crossed to produce it, but I'd say it is not inaccurate to say it is from the same family.


All that sounds right somehow, doesn't it, even if it doesn't fully answer the question of what the Thai and Myanmar versions of the tea is, assuming they are the same thing.  It would be possible to fully resolve the matter with extensive genetic testing, of course, and short of that a lot of pictures of plant leaves and flowers might shed more light on it all.


All of this is quite interesting to me, but I could see how many others would've concluded "I just don't care" before this much of the story unfolded.