I just spent months looking for better Thai teas, three or four years in all really, and as I've mentioned in other posts this latest vendor raises the bar.  My wife's aunt turned up a couple interesting ones on a trip this year but this tea I'm writing about is on another level.

The Tea Side vendor sent two Thai black teas made from a Jin Xuan cultivar.  This cultivar / plant type is usually processed as an oolong, but I've had it made into oolong, green, and black teas in the past.  They describe it as a red tea but that's just a different translation; red tea is what we call black tea in English, so it's the most literal translation from Chinese.  Somewhere along the way the English category name switched from the color of the brewed tea, reddish, to the color of the leaves.

Usually tea reviews are really objective, a careful taste by taste analysis, maybe including a guarded opinion about the tea at the end.  Forget that; I loved this tea.  This is probably my favorite black tea I've tried yet, although my long-term taste-memory is still a work in progress. 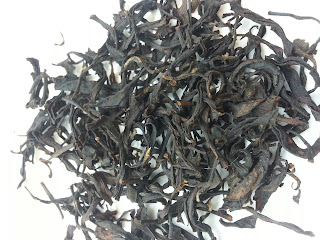 The tea smelled sweet and rich, like malt and dark cherries, and floral, maybe with a bit of cocoa.  Or then again that's sort of how a rose smells, sweet and complex, so a lot like that.  Brewed tea tasted a little more like peach, still plenty sweet, but nice and clean flavored, with a good bit of cocoa and malt, and some cherry as well, with a rich floral nature.  So good complexity across a range of awesome flavors.  It started to hint a bit towards sweet potato, somehow not my favorite taste element in teas, even though I like sweet potato, but didn't have the too-sweet aftertaste that can go along with that sometimes.


It can be hard to pin down specific taste elements when a tea has this much going on; all those tastes are similar but the specific descriptions are different.  Lets think back to that chocolate taster's expert advice on this same concern in a recent post, from Lisabeth:


In the case of Madagascar-origin chocolate, for instance, the chocolate is so clearly fruity that most people will identify that as a flavour in chocolate made from cocoa beans grown in Madagascar. But whether they taste raspberry versus grape or lemon, is a whole other thing. What we taste is also dependent on what we eat prior to tasting.


At any rate I love teas in this style, softer black teas with an interesting range of sweeter flavors, with good complexity.  It even had a little astringency to give it a nice feel, but not enough to come anywhere near bitterness.  It brewed a good bit of tea consistently, a good sign in a tea, without much flavor transition.  The smell of the brewed tea was also amazing, so fruity and floral you almost didn't need to drink it, you could just enjoy the smell.  Sometimes it works out that the empty cup will hold a strong fragrance after the tea is finished but I don't remember a tea liquid smelling this pleasant before.

It was so good it made me think about comparisons and weaknesses; how it related to other black teas that I loved.  I just bought a Vietnamese black tea I really liked from the beginning of the year a second time, a Wild Boar tea from Hatvala.  That tea runs a bit more towards earthy and cocoa flavors but can't match the fruit and floral aspects, and isn't as aromatic.  That astringency is also light as black teas go but a little stronger than this Thai tea, not quite as pleasant.


As I remember the character was not so far off the only Indonesian black tea I tried earlier in the year, from PT Harendong estate.  Another reviewer described the nature of that tea as "juicy," really seemingly related to the feel of the tea, and also "brisk," which would be a more familiar description.  It gets a little odd when you have to start using non-standard descriptions to bring across impressions, mixing taste and feel attributes together, but there's something to this.  There may be other effective ways to get there, comparisons to other teas or something such.


It's a stretch to say how it could be any better.  I guess for some the flavors could seem too sweet, but that's not really fair, saying that personal preference may not match up; of course that varies.

Before I even saw price of this tea I thought it would probably be a great value, since people tend to not even know teas like this exist, so hard for people to know to demand them.  Of course it seems fair to me after checking it; I just went on raving about the tea.  Although the taste is nice it's easy to have natural preference directed towards other tea types, lighter or darker oolongs, or maybe green teas or pu'ers, depending on inclination and experience with tea.  To me this is a tea a beginner could love and an experienced tea drinker might keep on craving, or as the vendor put it:


My absolute favorite for the evening drinking. Drink it almost every day.


I would ease up on the Wuyi Yanchas if I had a lot of this around.


Again a bit unconventional, but I'll start with the vendor description:


The tea is notable for delicate aroma of sweet buds. Here are more buds then in Red Tea #6 and the taste is a little bit more strict but elegant, more floral and less sweet, with a large number of semitones. But the flavor profile is still the same - tea-rose, caramel and tulips laced with dried fruits. 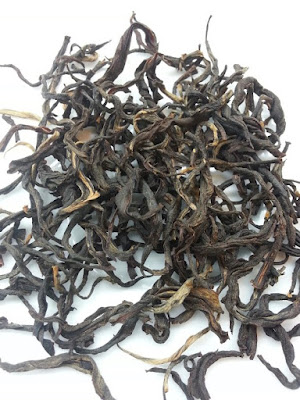 So it's being sold as a higher grade tea, which it looks to be by appearance.  It is closer in flavor profile to a standard black tea, with a clean, refined, structured taste and feel.  It's a lot like a Sri Lankan / Ceylon tea without much astringency, so a bit more earthy and mineral in nature, with less sweetness, floral, and fruit elements.


This reminds me of the earlier post on traditional Thai flavored teas, which are now typically sold as an orange colored iced tea (and now made from artificially flavored powdered tea, but that's a different concern).  In that post research indicated that traditionally Thai flavored tea included orange blossom and crushed tamarind seeds (which I've yet to run across yet--I'll keep a lookout for those), and also said the teas were made from local and semi-wild Assamica variation plants from Thailand.  It could be the case that these are those plants, these old-tree sources.  Of course that's connecting a lot of dots based on different speculations, but still interesting.  This vendor didn't specify which variety of tea plant these trees were, var. Assamica or Sinensis, but it seems a good guess the former. 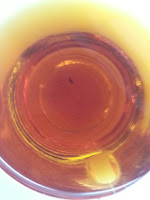 Some people would like this tea more than the previous one, # 6, but that tea is a perfect match for my personal preference in black tea, so it suffered a little in comparison.  Kind of strange saying that about a tea that seemed better in some ways, but there it is; subjective preference has me liking this tea and loving the other one.


I've had an experience like this once before, in buying a Lapsang Souchong from a Chinese vendor.  She sent samples of different teas and I really liked the smokiness of that tea.  As anyone who loves that tea type knows it's really about getting the type of level of smoke dialed in to personal preference, which is maybe even more subjective than other aspects of tea drinking, even though most sort of are in a sense.


For one person a smoked tea might be perfect, for another way too smokey, or not smokey enough, or too sharp flavored as that effect goes, leaning towards sour, and so on.  Of course I think people would tend to break one way or another on the smoke issue in general.  I tried one once that was so smokey I was tasting it for a half-hour after, an unusual experience of tea "finish."  It wasn't really bad but a bit much, I guess potentially a side-effect of them adjusting that flavor somehow.

To make a long story short, I tried one version of the Lapsang Souchong from that vendor and ended up buying a higher grade of the tea.  It was better in most of the normal ways, clearly a higher grade of tea, but I didn't like it as well; not enough smoke.  It was a lesson learned; if you can try a tea and buy one you know you like then good to go with that certainty.  It's one down-side of online buying, but the reach and range of products available and potential for great value are huge advantages.

I still love the type but I've had trouble getting back to finding that perfect level and type of smoke.  If I were back in Pennsylvania, where I'm from, I'd settle the matter myself by buying a good bit of black tea and experimenting with burning different trees growing all around, but here I just let it drop.  Here in Bangkok it is possible to walk around the sidewalks with a make-shift food cart selling meats grilling on a small wood fire but I'm not on that page at all.

About these other two black teas, it all depends on preference, but they represent why black tea shouldn't be marginalized by oolongs and the rest as they tend to be.  When one really clicks for you it's just as special as when more conventional tea-type hype applies, even if it still seems a little more like an "everyday tea."
Posted by John B at 11:10 PM