I picked up a Wu Dong Dan Cong oolong at the Jip Eu shop in Chinatown on a second visit there, the place I was raving about related to finding good Wuyi Yanchas.  I spent an hour tasting different teas and talking with the owners during this last visit.  It was really a shame it wasn't half a day.  Talking to them was like skimming through a reference book on tea, and they were so nice.


The label for the tea was almost entirely in Chinese, with the main title translated as "Wu Dong Dan Cong." Of course this a location reference for the name of an area in the Phoenix mountains and a regional oolong tea type.

This is not to be confused with the Wu Dang kung fu fighting style, although that's probably also interesting.

Floral!  With fruit!  The tea is like a mixed bouquet of flowers distilled into a teacup, with a bit of light citrus, sweet peach, and honey for a base.  A mild vegetal taste and light astringency even matches the flower stems part.  The fruit component even tasted a bit like banana, and after thinking about it some of the flavor that seemed floral came across more as banana; funny how that can work out.


The sweet floral profile was so rich it might be possible to list out different flowers showing up in it, but I'm not the best person for that.  Maybe some type of orchid for that bright sweetness with something like chrysanthemom filling in a softer floral base, but really that's probably not even close.


The tea brewed lots of infusions, relatively consistently, although I did wonder if the proportion of different floral elements was changing and I wasn't picking up on it.  The astringency and vegetal component picked up a little after many but basically the tea stayed consistent. 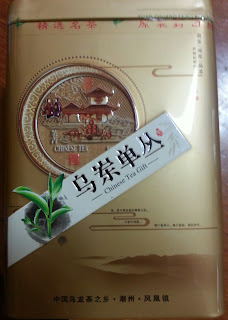 The astringency was presented a little differently than I remember experiencing before.  I just wrote about an Oriental Beauty, where that astringency came across as a light dryness, resembling that in a black tea, just milder, with a different feel.  But this was nothing like that.  It was closest to some types of green teas, or maybe reminiscent of Darjeeling, with the degree being comparable but not the type.  It was interesting the way that bit of astringency integrated with other flavor components; it made sense together.


The tea was a relatively direct contrast to the Wuyi Yancha types I've tried a lot of this year:   soft, rich, earthy teas that emphasize mineral components over floral aspects, with very limited astringency.  Better versions are quite aromatic but across a very different taste profile range, definitely not so floral and sweet.


I feel like I was too overwhelmed to really do a taste-by-taste description justice.  Some of that dazzling sweetness seemed to relate to fruit components rather than flowers, bright citrus, peach, even banana but I was a bit star-struck to really sort it all out.  After tasting a lot of teas from one type it becomes clearer how other aspects relate to different presentations of the tea type, how aftertaste and feel factor in, but this was a bit new to me.

At first it seemed the name wasn't complete enough, just a location name and general type, but then naming conventions do vary.  In some cases they are based on plant types and locations; other times more details apply.  Research should turn up a bit more, maybe even about this specific tea.

This long reference article by Hojo Tea covers a lot of scope, about the general type, typical aspects and how better versions differ, the region, cultivars, preparation methods, how to brew the tea.  Actually one might do well to skip reading the rest of this post and just read that instead.  I'll cite a few key points here and move on to what other references cover beyond that.

Tea type:  they say the better versions are from Wu Dong mountain, and claim that most are varieties of Shui Xian, a plant type common to the Wuyi growing areas, but quite different versions even though there is some relation.  As in discussion of those types, they mention the most specific plant types vary a lot:

Due to a few hundred years of cultivation, the cultivar of Phoenix tea trees have undergone years of natural hybridization or mutation, where such biological changes brought diversify to the flavors of respective trees. Tea leaves plucked from different trees will produce different flavors, even if the processing methods or techniques were the same. The name of various Phoenix Dan Cong oolongs was given based on the flavor of tea leaves produced from its original tree.

Citation editing note:  I had to take the "u" out of flavour.  They must have their regional dialect version set wrong.

There's a lot of such interesting background in that article, of course covering such subjects as old tea trees and tea processing steps, but the most relevant points related to the flavor of the tea:

If you try the authentic Phoenix dan cong oolong, I am certain that you will be shocked by the overwhelming extent of fruitiness.

I was shocked.  It really was a unique experience, that tea.  The astringency was also a bit unusual, relating to a comment there:

... if the tea is plucked during early spring, it should not be bitter. Generally, the tea harvested during the late spring, summer or autumn, produces bitter and astringent taste, and it leaves a very unpleasant feeling on the tongue.

I wouldn't describe the astringency as bitterness, or as an unpleasant feeling on the tongue, but it was a bit different than almost all other oolongs, which are typically very soft.  One online tea friend remarked that he would even crave this aspect in the tea, not just accepting it as a companion to the floral and fruity sweetness but regarding it as a positive aspect.  I'll have to keep drinking it and see.

Echoing a completely separate but related discussion of aging Wuyi Yanchas this article claims that in some cases aging can affect the tea positively (but I won't go on about that; lots else to cover).  All the parts on tea processing are also too much to go into but definitely worth a read too.

I found a secondary blog source that goes into lots of detail about the type, but it's all really too much to treat fairly here, so I'll just cite that reference.  Suffice it to say it delves a bit deeper, with interesting points related to narrowing the scope of tea characteristics down from tea producing region, tea plant type, and estate / grower to teas varying as they come from specific tea trees:

And a bit on brewing advice:

One more subject I didn't get to (one of several parts of the story, really) is differing names for Dan Cong teas.  One part of which relates to naming variations after characteristic tastes and scents.  The Tea Obsession blog goes into the standard names used related to specific fragrances:

It's interesting to note the complexity of this tea I tried could be an indication of a lower grade than those types, with that distinctiveness further emphasized when the tea is coming from a single tea tree source.


Of course the type that gets the most press lately goes by the unusual name "duck shit" Dan Cong (Ya Shi Xiang Dan Cong--not as catchy, at least to an English speaker).  One part of that is Forbes publishing an article on it, where it's described as a relatively mainstream trend (which of course is all relative; only widespread within a narrow scope).  Oddly the only description of the tea itself in that article says that it "doesn’t truly smell or taste like duck waste."  Good!  But not descriptive.

There is a nice Steep Stories review of one version of this tea here, and a Yunnan Sourcing vendor blog explanation of the name here (although there often tend to be multiple explanations for such things):


It's called "duck shit aroma" because in the Ping Keng Tou village area the soil has a somewhat yellow brown look to it and is unique to that area....  Villagers wanting to guard the uniqueness of their tea bushes told outsiders that the color and uniqueness of the soil in their village was due to copious amounts of duck shit...


According to the tea vendor source for the Steep Stories blog review cited here (White 2 Tea, which I see referenced more often for pu'er sourcing), about that tea:

the actual fragrance is floral in nature and the tea has a lasting sweetness in the mouth.


More on that type later then.