The tea does have that distinctive oriental beauty flavour:  sweet, floral, light, balanced, with fruit and a bit of spice.  Cinnamon is one distinctive element, with the sweetness resembling honey.  Peach is a predominant fruit flavor, or between peach and apricot maybe, but in a much different presentation than in a sweet black tea where that would join along with other heavier flavors, here coupled with bright tones.

The freshness of the first infusions is so intense it's hard to describe, almost like a light citrus element, but it doesn't really taste like orange or lemon, more a vague but positive impression. 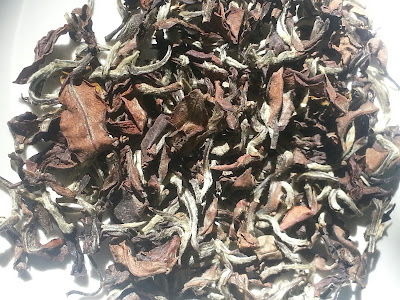 The tea is light but not in the same sense as many other lightly oxidized oolongs; there is just a touch of astringency to balance the effect, not enough to come across as bitterness, but enough to give the tea a fuller feel.  It’s a lower-medium level oxidized tea, not a light oolong, definitely not a darker roasted oolong.  Of course the style is much different than in lighter oxidized Wuyi Yancha (hard not to refer back to that type since I’m a bit stuck on them, mostly in a good way), and nothing like other conventional Taiwanese teas either, even though this style did originate there. 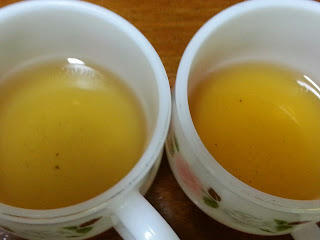 Across more infusions the bright, sweet flavor persists, along with the richness of the tea, with the main transition being the cinnamon element drifting a little towards cocoa, still a really nice effect.  Even the empty cups give a nice impression, with a strong cinnamon / cocoa and honey scent remaining after the tea is drank.


Varying the brewing time to test the effect doesn’t actually change much related to the flavors; the same profile comes across, but the feel of the tea changes, the “thickness” and slight dryness in the body picks up. 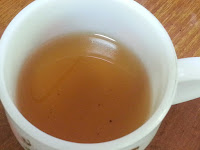 After a lot of infusions (an awful lot) the flavor is still clean and positive, it just requires longer brewing time to get the tastes out, and the earthiness increases as the sweetness and fruit diminishes.


The Thai vendor that provided this sample, Tea Side, seems to deal more in Thai pu'er-style teas (hei cha, that really is, which translates as "dark tea," even thought it takes some time for the sheng / raw / green version to ferment and become dark).  They also sell other unconventional Thai oolongs, even Thai black teas, with a running ancient-tree leaf-sourced theme, so more on some really interesting teas to follow.


I was just saying in other posts I was happy to see the level of variation I had been in finding a few different examples of Thai teas but now it's really on.

So the tea is good, I suppose maybe great if one really likes Oriental Beauty, but then who wouldn't.  Of course for every type of tea once one has tried a lot of different versions the context shifts a bit, and I'm not that far along with Oriental Beauty, so I'd best leave off at saying I liked the tea.

In the last review of a related type I posted, also about a Thai version, I noted the tea had a number of different names:  Bai Hao, and Peng Feng, and now Dong Fang Mei Ren.  Of course it's normal for tea types to go by more than one name, and not unheard of for names in use to just be wrong.  In a sense it doesn't matter, right, as long as the person drinking the tea gets a good idea of what to expect in advance and then likes the tea, but while I'm writing why not delve in a bit.

I wrote on the background about leafhoppers eating the leaves in that earlier blog post, so more on that there, but in a nutshell:  it seems likely a defense mechanism causes the tea plant to change leaf composition, perhaps related to a defense mechanism, inadvertently making it taste better when prepared as tea, but that's not the only interpretation one runs across.

Before more on those names, and the typical aside on cultivars, here is the Tea Side vendor description of the tea:

Taste: The tea has a solid taste, classical honey flavour with clear floral sweetness of tea tips. Very fragrant oolong. Bright notes of fruits and flowers here are in aroma. Strong velvety sweet aftertaste with tones of peaches and honey.


I was just discussing tea grading conventions; more on what "AAA" means another time, but obviously it's a judgment about the tea grade being higher.

Not much on the name but the description matches my impression; I just thought cinnamon made for an additional primary flavor element, with some transition to cocoa later infusions.  As I read back through my other Oriental Beauty oolong review that tea sounded quite similar, just with a bit more blueberry component along with the peach in the fruit range.  The spice and the effect of the trace of astringency in that other tea, similar in this one, also came across tied to a trace of yeast or bread dough, which wouldn't seem like so much of a stretch for this tea, but likely a good bit more subtle.

The style of tea might well go by lots of names (that I'd researched there too), but this could well be the "right name," much as there ever is one.  A Wikipedia article says it is:


Dongfang meiren is the chhiⁿ-sim tōa-phàⁿ (青心大冇) cultivar grown without pesticides to encourage a common pest, the tea green leafhopper (Jacobiasca formosana), to feed on the leaves, stems, and buds.


Lately I've been on the track of cultivar review (plant type), so a bit more on that.

A recent reference about cultivar types had me on this subject (a new, still being tweaked, World of Tea database).  I didn't find it there, not even looking for that cultivar name, which another nice general reference (the Tea DB Taiwanese cultivars write-up) identifies as Chin-hsin Da Pa (same as the Wikipedia article, just a bit more transliterated):


That same reference says another cultivar is also normally used to make Oriental Beauty, White Hair Monkey, and that Cui Yu and Jin Xuan also can be.  The implication here is that different plants will all change in a similar way when leafhoppers eat part of the leaves, but it's not possible to extend that to how they might differ.

I really don't have much to add about which cultivar I think this tea would be made from; with adequate research the leaf shape might tell part of the story.


Of course I'm not saying this is the final word.  Just as sampling a number of references pointed in some different directions in that first write-up I'm sure another dozen articles on "Oriental Beauty" related teas would fill in a broader picture.  I recently ran across an intriguing and very cool looking blog post about a Japanese version not so long ago, but the information was mostly visual there, a picture of a similar looking tea.  I'll take all this up again the next time I try one.