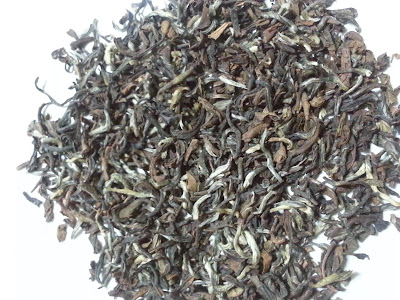 A friend visited Bangkok recently, Ethan, and passed on some tea, a nice Himalayan Orange tea from Nepal.  The last really interesting tea he passed on was a Shangrila White tea from Nepal, reviewed here.  I'll say more about what the tea is in the second part, the shortest possible version being that it's like a Darjeeling, which aren't always so easy to categorize.  But I'll go ahead and review it first.


The tea is nice.  The dry scent seems a little faint, citrusy, with lots more seeming to go on below that, in the fruit range or maybe cocoa, just hard to pick out.  It smells a little like Fruity Pebbles, which to me means it smells like pandan leaves, since that seems to be a characteristic scent / flavor in those (surely artificially based in that cereal version).


The brewed tea strikes that nice balance that nice black versions of Darjeeling get to, lots going on, in the black tea range but different and unique.  Fruit not completely different from muscatel is there, it's just not really like a second flush Darjeeling, not pronounced and distinct, not the main element.  Citrus seems more predominant to me, more like sweet red grapefruit than the other types.  Maybe there is a touch of pandan leaf component in it, which comes across close to a tropical fruit range (an awfully broad scope, that). 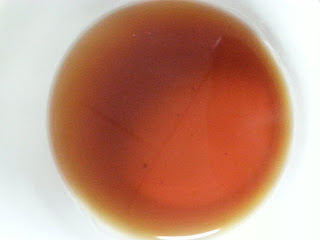 It has that black tea character that is typically described as malt, that one limited range pronounced in Assamica teas, but really to me malt can be expressed in different ways.  Some milder, less oxidized teas can taste like a malted milk ball, or Ovaltine, especially when the flavor pairs with cocoa or other softer elements.  Coupled with astringency and other earthy, drier aspects it can be a totally different thing, still like malt, but not the same.  This is sort of in the middle.


I get the sense this tea would change aspects based on brewing parameters.   Brewed stronger it could seem like astringent black teas, a bit stout and full in feel, a bit astringent with earthy aspects.  Brewed lightly and easing up on temperature one could probably draw fruit out more without as much astringency, or maybe even get the fruit related aspects to vary some.  It seemed different across even the first two infusions, perhaps not so much from transitioning as me not minding brewing time closely (more kids' shouting than usual in the background, a bit of a contradiction in saying that because it's so typical in our house).


I  tested that with a really short, cooler infusion next, far from optimizing brewing, just messing around. This would be a good place to mention that I was using a modified western brewing approach,  going a bit heavier on tea ratio so it won't brew out in three infusions, as a more standard Western approach to a black tea might.  That fruit eased up a lot even by the third infusion.  The tea is still malty,  a bit dry, with traces of that complexity layered in.


I tried the tea again two days later, with similar results.  It has good complexity, with lots going on, striking an unusual balance between being a fruity, complex, relatively soft black tea, but also a bit dry, with some earthier components.  It has an unusual version of a typical black tea astringency.  That astringency is not so pronounced one would need to "brew around" it but it is a factor one could balance in different ways, based on differing preparations.  I could imagine different people describing the tea in different ways, even beyond those real variations in how it turns out.  It's really in between a lot of other types and styles, definitely closest to Darjeeling, which one could also say about teas from that region.  It would be interesting to do a comparison tasting directly with a nice second flush Darjeeling, but I didn't.


Ethan describes a little about what the tea is, and some on brewing, in a recent Tea Chat post on a general black tea discussion thread:


I have been drinking an organic black tea from Jun Chiyabari in Nepal, Himalayan Orange (HOR) most days for > 2 years & have sold much of my large stash to teachat members.

Lately w/ all tea, I have found myself employing less time for steeping w/o increasing the amount of leaf I use. This practice usually does not cut down on the aroma & flavors I like & avoids most bitterness or astringency that I don't like. For the HOR cutting the time down a lot was not close enough to perfect & keeping steeping almost as long still produced some astringency & bitterness that I used to feel was "body" or "fullness".  Today I accidentally scooped a bit too much leaf & decided not to remove the extra & go "semi-gongfu". A combination of a 45 second, 25 second, & 15 second infusions is excellent. To confirm I like this semi-gongfu & perfect it, I've made a 25, 15, 15 blend that is just what suits me these day when even slight earthiness or bitterness puts me off. This quick steeping is the best.


Interesting about the brewing, isn't it?  He's talking about "stacking," combining different infusions, not something I even try, but an interesting idea.  It seems odd to use such longer times first, then cutting those so much, since a standard practice would be to use a rinse to offset tea needing time to open up (which one could replace by using a slightly longer initial time), then generally adding times as infusions progress.  At any rate I was using an intermediate approach between normal Western and Gongfu styles as well, using a tea to water proportion and time-frames in between those two normal sets of parameters.

Related to buying a lot and sharing it (selling it), he had to buy a number of kilograms to get the tea from the source he did, and he said that still has some left, so he could still sell more of it.  He also said more about sourcing issues in conversation, and you could ask him about all that through this contact (merrill23k@yahoo.com).  Initially one might wonder how two years of storage has changed the tea, which Ethan commented on:


My conclusion is that this HOR has strengthened w/ time. All it s flavors & characteristics are stronger.


I tried this tea once over a year ago, based on the Tea Village shop owner in Pattaya sharing some Ethan gave him to try then, and the tea isn't like I remember it.  But then a distant memory of trying a tea in passing is not much to go on.  It's a bit of an aside, but it's a nice sign when a tea vendor shares teas they don't even sell with you, not the only time that's came up.  This tea seems more like a conventional black tea now than I recall, more oxidized, less literally "orange" than I remember it, with a bit more astringency.  Or maybe the other flavors are just more subdued, which would take results to roughly the same place.  Or maybe I just remember it wrong.

I'm curious about what cultivar the tea is made from, and which flush it is.  Since it seems more like a black tea than I remember, a lot like a second flush Darjeeling, it would seem like Chinese tea plant type or else a related hybrid, and probably second flush.  But then the typical characteristics profile for second flush Darjeeling relates to multiple factors, to changes in the leaves across different harvest seasons, and also to those teas being prepared as more oxidized than first flush (typically, per my understanding, but that wouldn't always be the case).  I remember the tea as not being oxidized to the normal black tea range, which is close to how it comes across now, except the brewed leaf appearance tells a different story altogether.  Lets look at that: 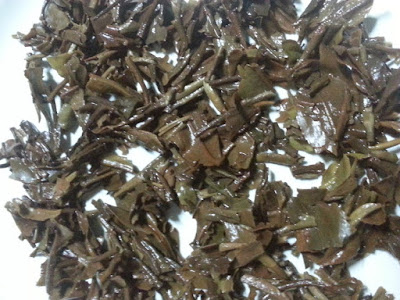 Fully oxidized tea brewed leaf is brown; this retains a greenish color.  It also has a slight greyish-green look to it, which can be characteristic of aged less-oxidized leaves.


The Jun Chiyabari website (link here) doesn't mention this tea, or any specific teas, just general categories and background, so there is nothing to go on there.  A US vendor tea blog (Happy Earth tea) mentions some background, and a little on types:


Jun Chiyabari was set up in 2001 by two brothers Bachan and Lochan Gyawali. The 75 hectares garden was situated in the hills of Hille, just about 50 miles east of Darjeeling. The well-travelled brothers planted varietals from Dong Ding, Taiwan and wild forests of Miyazaki, Japan, unlike other gardens in the area that limited themselves to tea plants from Darjeeling.


Of course that really doesn't say what this tea is, and is nonspecific in general, and they don't sell this particular tea to help clarify it in particular.  Another vendor site, Klasek tea, goes further (they're in Prague, Czech Republic, totally unrelated to this tea or producer, but cool):


The tea garden in the eastern Himalayan region of Nepal, located in the hills around Hile in Dhankuta district...  The garden falls within an elevation of 1600 - 2000 meters above sea level. This area is about 200 km east from Kathmandu; 55 km west of Ilam in Nepal and 65 km west of Darjeeling, India.

From Nepal came plants (cuttings and seeds) from the original seeds plants given by the Qing (??) Emperors (1850’s-1860’s) to Nepal’s rulers. Locally available plants from Nepal Tea Board like AV2 were also planted.  From Darjeeling we got cultivars like T1, T78 and Phoobshering 312 and many others. Also valuable cuttings and seeds from China seeds plants were obtained through friends and well wishers.  From Japan common variety like Yabukita and some special tea plants growing wild in the forests in Miyazaki ken were planted out.  From Taiwan plants like Si Ji Chun (??? / Shikiharu) and Chin Sin Oolong (????) from Dong Ding in Nantou were brought and planted.


Could be anything then.  Si Ji Chun and Chin Shin are familiar enough; not sure what the question is related to those.  I've had some great luck with Gopaldhara tea versions based on AV2 cultivar, a hybrid of variety Sinensis and Assamica plants, but that's just part of this list.  That vendor does sell a tea described as Himalayan Orange, a second flush black tea, but their description doesn't include a plant type:


The tea I tried seemed a bit heavier on fruit than this description, and I wasn't noticing much cocoa (maybe in the scent, not as much in the tea), and no cinnamon, but the rest sounds close enough, probably the same tea.

After all that hard to know what note to end on to wrap it all up.  It was a nice, unique, interesting tea; between this one and the Shangrila White a sign that some novel teas are coming out of Nepal.
Posted by John B at 12:46 AM