On being a tea enthusiast, and other self-labeling


I'm in a Bangkok Foodies Facebook group, although I don't really consider myself a foodie.  Somehow I just don't feel like I like food more than anyone else.  I do cook, so there's that, but the proper focus seems to be on dining out, and expensive restaurant meals have essentially failed to make my list of priorities.

That group owner recently mentioned an Urban Dictionary definition of Foodie; cool that she took it so well under the circumstances: 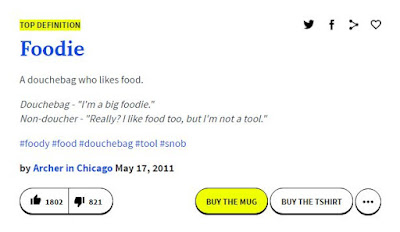 A douchebag who likes food; kind of negative, when you put it that way.  It got me started thinking about how tea drinkers refer to themselves, adopted self-labeling for that.  It's sort of a different thing, since almost everyone likes food, to some degree, referenced in that definition's rejection of the concept.  So what about tea?  Here are some labels for someone who is into that. 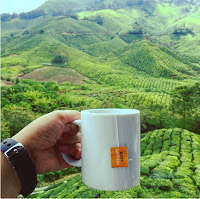 Tea enthusiast:  seems most common, generally descriptive, fairly neutral.  For some it might be too neutral, or enthusiasm may just not seem a good fit.  You can self-select as a Tea Enthusiast by LinkedIn; that would make it official.

Of course there's always the issue that non-tea-enthusiasts don't really get it at all, as in this Buzzfeed post "19 Pictures That Will Sexually Awaken Any Tea Enthusiast."  There had to be another way to put that, and many of those pictures show tea bags steeping; not so enticing.

Tea lover:  way too conversational; may as well say "someone who likes tea."  Besides that it works.

Tea head:  a nice twist, although I've only hear Don of China Life and Mei Tea use it.  Maybe for some too close to negatively biased stereotypes, motor-head or pot-head, which maybe aren't so negative for car enthusiasts or stoners.  According to that Urban Dictionary tea head is actually British slang for a cannabis user.


Tea sommelier:  more a rank or certification, a proof of taking a class or a test, or perhaps even a job title.  It would seem odd for someone to just start calling themselves that, and even the class certificate level could mean different things to different people.  Originally that term just related to wine, but now it seems fair enough to branch that out, even if establishing uniform credentials could be an open issue.  Here's a video on being a water sommelier, or an article on the same subject; it just keeps going.


Tea specialist:  At the World Tea Academy you can be certified as a Tea Sommelier, Tea Specialist (makes sense), Tea Professional, or Tea Health Expert (?).  The LinkedIn references to Tea Specialists seem to relate to such certifications; at a glance, a lot are through the Specialty Tea Institute.


Tea connoisseur:  I almost missed this one; seems a bit dated, along the line of "gourmet."  Here's a thread on Reddit about how to become one, or a Quora answers set (eg. try a lot of different teas).  How would I know when I get there, to be a connoisseur?  Here's a Dictionary.com definition to go by:


1.  a person who is especially competent to pass critical judgments in an art, particularly one of the fine arts, or in matters of taste
2.  a discerning judge of the best in any field


An ordinary level of humility would prevent most tea enthusiasts from claiming this label, but I guess if someone is judging tea competitions they'd automatically fit that.


Tea master / guru:  more something that someone would call their tea master, not themselves.  I ordained as a monk once--long story--and struggled a bit with whether or not to call my teacher / guide monk my master, and in the end no title really seemed to fit the role.


Tea man:  nice!  This has an old-school ring to it, like salesman, along with a working connotation.  I suppose there is gender bias built into it though, and tea woman doesn't work so well.  I guess "tea person / people" could be a comparable alternative, a bit odd gramatically but it works.


Tea blogger / vendor:  the easy way out, for people that fill these roles.  Just shift the meaning context a bit and some degree of interest and expertise is automatically implied, although not a given.

Tea goat:  this may seem like just making stuff up.  I've only heard one person say this, maybe only once, but it seemed so catchy that it stuck.  That was Jeff Fuchs, if that name rings a bell.  If it doesn't you might want to check out his Tea and Mountain Journals, along with other writings about the old tea-horse road, a Himalayan version of the silk road trading route.  If anyone is a tea goat he is.

In conclusion, there are lots of things that you could call yourself if you feel you like tea more than most.  Some of those are quite official sounding, especially paired with some training credentials.  As far as something like blog branding goes you could be a tea fairy, tea imp, or tea Jedi, but you'd want to check those first since a lot of the good names are already in use.  In conversation there may be no need for any label, but it sort of does come up in writing about tea.
Posted by John B at 10:48 PM