Not long ago I reviewed an Oriental Beauty (Bai Hao) from May Zest, a wholesale tea vendor from Taiwan, and now I'm reviewing a black tea from them, a Honey Flavor Black Tea.  Their description invokes the same story as for OB, as follows:


The tea is hand-plunked and made from Chin Shin Gan Tze which is cultivated in San Xia Township. The tea farmers won’t use pesticide, because they want leafhoppers come to eat the tea leaves. After the bite of leafhoppers, a chemical reaction occurs in the leaves and causes that fragrance and sweetness.


I'm not so sure about any of that but it is decent tea, well within the range of what I like in black teas.  It's a variety Sinensis black, given that cultivar reference, which is what it seems like, a soft and fruity black tea. 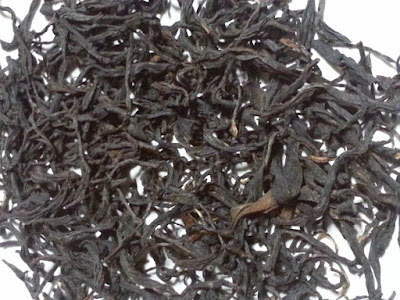 
It does have some sweetness; maybe that does resemble honey.  Cocoa might come across as the primary taste element,  with a bit of subdued fruit, yam or sweet potato.  Another main aspect is an interesting dryness, an unusual feel I've heard described in other teas as resinous.  All that range overlaps with Jin Jun Mei, it's just presented differently, in a conventional black tea.  It's not really fair to compare this directly with that Jin Jun Mei from Cindy Chen, or even to her unsmoked Lapsang Souchong, because those were some really exceptional teas, some better versions of those types that wouldn't be so easy to run across.


There is not really any astringency to work around, but a little of the earthiness reminds me of Assamica black tea versions, just not the general character of the tea.  It seems like a variety Sinensis tea (which it is); soft, sweet, similar to Chinese black teas in style (although those vary a lot).


I really expected it to be closer to the Thai Tea Side black tea I've been drinking, slightly fruitier, with a trace cleaner flavors, not quite as dry as this comes across.  It's funny how expectations can shift an experience, how any change can be something to get past at first, unless a tea is somehow clearly better than expected.  I guess the point is that different than expected could easily be interpreted as not as good.


The flavors stay nice through multiple infusions, consistent, or maybe even improve.  The fruit seems to move towards cherry a little, a nice pairing with the cocoa element,  like a chocolate covered cherry.  The feel effect is nice, different, a touch dry and a touch juicy at the same time.


With lots of similar black teas it works well to use water a bit below boiling point to brew, then switch to full boiling after a few infusions to extract a bit more. That will also pull out a bit of dark toffee taste in that last infusion.  Per someone's preference simply ramping up the tea to water ratio and cutting the brewing times a little enables brewing more infusions, sort of shifting to a hybrid Western-Gongfu style, but I don't think that would change aspects results much for this tea.  At any rate it's not a touchy tea; there would be some optimum but it works well across a broad range of parameters, likely with similar results in spite of variations, but aspects might shift just a little.

To me it's a great breakfast tea, easy to brew, no challenge to drink, none of the stomach issues with green teas.  It pairs well with pastry and cereal, or would work about as well for an afternoon tea too.  To me it's sort of a basic tea, a general type I love to have some of around, so I'm not sure if it really lives up to a billing of being a black tea version of an Oriental Beauty, but it is nice.  I've tried a lot of black teas from a lot of places over the last year but it doesn't work well to put it on some sort of scale.  It's good, and a lot of good black teas vary more by being slightly different than by some being much better than others.


There's a divide between Assamica and Sinensis types by characteristics, and I suppose I really do like variety Sinensis black teas better, in general.  But nice versions of the others can have lots going for them, and that's more about my preference than those really being better in some objective sense.

The vendor type shifts things a little, related to buying this tea.  Of course since May Zest is a wholesale vendor the general idea is that someone could buy a lot to resell, but really nothing is stopping someone from buying more than the usual 100 grams to drink themselves.  The smallest amount they sell is 250 grams, but that's essentially same packaging size one often sees for Thai oolongs (200 grams, for my favorite line of those, which I never drink now since I've burned out on lightly oxidized oolongs).  I gambled a bit and bought a half kilo each of that Oriental Beauty and this black tea and luckily I like both.  I have enough to share as gifts but I won't need to figure out what to do with them, since after a year or so in the rotation of teas I could just drink most of that.  They also sent some samples so I'll be posting more about their other teas.
Posted by John B at 7:41 PM