This tea was provided by Gopaldhara as a sample, with reference to it here as Emperor's Choice white.  Rohini is a newer estate also owned by Gopaldhara, with more on the two estates here.  On to review then.

The main characteristics are brightness, sweetness, full feel, and flavors intensity, with fruit as the main taste range.  Peach, melon, citrus, muscatel, and a pronounced floral layer all integrate into an intense, clean flavored, integrated range.  A subdued muscatel element is part of that, it’s just not one of the more dominant flavors.  The flavors complexity could be described different ways based on interpretation, with no one flavor aspect dominating the others.  There is no significant astringency to compensate for in brewing, no bitterness or rough feel to the tea, just a rich fullness. 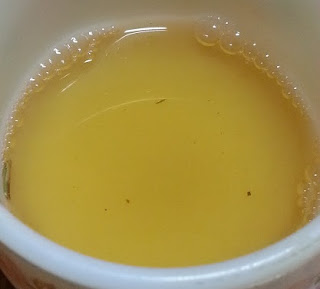 This type of tea could be brewed Western style, with a standard proportion of tea to water and brewing time.  In rough terms one heaping teaspoon of tea to cup of water is brewed for approximately three minutes, varying for preference, with brewing time extended across multiple infusions.  But with so much complexity it also works well prepared Gongfu style, using a higher proportion of tea to water and more shorter infusions.


It depends on the proportion of tea to water used, but one might start with infusion times around ten to fifteen seconds and extending to forty-five seconds to a minute in later rounds.  The brewing results might be comparable for both approaches, related to the character of the brewed tea, but Gongfu brewing allows for a more complete experience of transitions that occur.


Across infusions the tea aspects transition but the bright, sweet, clean effect remains consistent.  Initially the full, rich feel is coupled with an actual butter taste aspect.  Fruit is more pronounced initially, first peach, then citrus becomes more predominant, first the full, sweet citrus range found in sweeter versions of grapefruit, transitioning to lighter, bright citrus in orange zest later on (orange peel aromatic oil).  Across the transitions floral aspects remain a consistent and positive background element, with more light mineral tones joining in later infusions.  Someone with great scent-memory of types of flowers might have lots to add about particular floral aspects, but I don't.


This is a sophisticated, complex, entirely positive version of a white tea.  Some aspects are common to other Darjeeling versions from Gopaldhara but the overall character is unique.


The profile of this tea reminded me of their Wonder Gold tea (their site link here; a great first flush Darjeeling, not a black tea, so it could go by "oolong," but the style is a bit unique).  Per input from discussion with Rishi Gopaldhara, the plantation manager:


Again the tea is from Rohini, a second related plantation site, with more details about it here, tying to those comments about the end effects of elevation differences.

One of the more positive aspects of Darjeeling that's harder to catch in a description is an impression of freshness.  This tea certainly exhibits that, along with complexity, brightness, and fullness, kind of across the whole range.  It's hard to imagine what set of personal preferences would lead someone to not like this tea, but I guess if someone was solidly stuck on a earthy or mineral aspect or specific tea-type range maybe (no offense intended, pu'er enthusiasts).  There is nothing like the grassiness of a green tea to be put off by, assuming someone doesn't like grassiness; per my likes, a tea tasting a lot like bell pepper or roasted tomato can be nice.  There are really no negative aspects in general.

Another sign of an excellent tea, across different types, is brewing a lot of infusions with consistently positive results, and this tea certainly did that.  Around ten infusions in--with those not brewed wispy-light, as some might prefer--this tea could almost pass for a reasonable version at the beginning of the brewing cycle.  The flavors did become subdued, and the full feel tapered off, with more mineral tones joining in, but brightness and sweetness remained.  It took a much longer infusion time to get to a medium brew strength, and compared to earlier in the cycle, but the tea had a lot to offer through lots of infusions.  It seems to me that to some extent white teas and lighter oolongs are like that in general, with black teas and darker roasted oolongs fading faster, but only better teas will go as long and retain the same degree of positive characteristics throughout the entire cycle.


Compared to other origin white teas, and on brewing

Lets break a tea reviewing rule before closing, and compare my own subjective preferences between different origin white-tea versions.  Up until this tea the best white tea I'd tried this year was an Indonesian Toba Wangi White Beauty, and the best recent version before that was a Shangrila La white tea from Nepal.  Both had lots of great aspects, unusual flavor ranges, full feel, and unique characters; they were both just different.  Teas like those can change character a good bit based on brewing approach, as this one probably could, for example shifting the balance of aspects based on water temperature used (more on that before I close as well).

This tea seemed a little less out of the blue because the aspects overlapped with their Wonder Gold I'd tried recently--with both based on the AV2 clonal type, apparently a fantastic tea plant--but it does stand out as just as unique.  There's a review of that Wonder Gold here, and more on the cultivars in this post, along with a review of another related tea.  I'd be hard-pressed to say any of those three were really better than the others (related to just comparing those white teas from Darjeeling, Nepal, and Indonesia); side-by-side they'd be an awful lot to take in.  In addition to the stunning set of aspects this tea comes across as very refined, and the combination of attributes is unique.

A word on brewing might start with reference to Gopaldhara's advice first:

• Water : Always use cold fresh water.• Boiling : Temperature of the water: 85°C.• Tea Qty : Weight of leaves per cup: One teaspoon (around 2.5g).• Brewing Time : 3-5 mins.• Additions : No Sugar or Milk. Condiments are not advised as it may ruin the natural flavor of the tea.


I brewed the tea Gongfu style, not Western, but otherwise it looks the same.  Results would still be great Western style, not so different.  It can't hurt to experiment with brewing white teas with boiling water instead, if you have a good bit on hand and can spare it, but a good bit off boiling point is standard.  The standard temperature typically will give best results, that just varies by tea more than one might expect (and as everything does, by preference).  Ordinarily I wouldn't tell anyone how to prepare their tea, for example with or without sugar or milk, but it would be an abomination to add sugar and milk to this tea.  It's one of the most flavorful, soft, naturally sweet, pleasant-flavored teas you could ever try.  I would never be curious what this tea would taste like with sugar and milk, and although I tend to try crazy experiments with tea even I'm not that crazy.  Trying it iced, maybe, if I had at least 100 grams on hand to drink normally and also mess around with.  Cold-brewed this tea might have the power to compel people that normally hate tea to love it.


I've written before about the general divide in brewing white teas lightly or stronger, for three versus five minutes, in that time range they mentioned.  I'd expect people would more typically not use four; they'd go with one of the other extremes, but that just depends on preference.  The same flavors emerge in a lightly brewed version, and it may even be easier to separate out individual aspects that way, with practice, even though that's counter-intuitive, that you can taste more from a weaker / lighter brewed tea.  But if someone is accustomed to teas brewed in a stronger taste range, perhaps carried over from how black teas or oolongs are often experienced (just not always), white teas work well stronger too.  The effect of the flavors aspects shifts a little doubled up in strength, and body / feel becomes more of a relevant characteristic, but all of that just depends on how someone likes their tea.  In general--definitely not a hard and fast rule--it would seem preference would tend to shift from stronger to lighter over time, or maybe that's only my take on a most natural preference transition.


In conclusion, I didn't have the easy to describe experience I was expecting from this tea, just listing a number of attributes and being done with it, so it was a pleasant surprise.