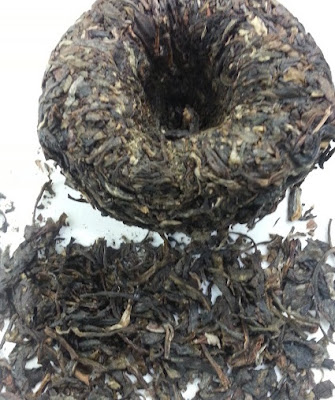 The natural reaction to the subject of buying commercial pu'er from a grocery store:  don't do that!  As a rule I'm past even being curious about what teas are in grocery stores, but I still can't help but look if I walk past them.  Grocery stores here range from Tesco-Lotus (the British chain, low to medium range products, good for basics) to higher end specialty shops where selection is better but paying twice as much for dressed-up versions can get old.  Or there are old-style markets, awesome places for deals on better fruit and vegetables, but the smell takes some getting used to.  I was in a better mall store, a Gourmet Market (they might update that name).  It's early in this post for losing the thread but first a tangent about why I was there. 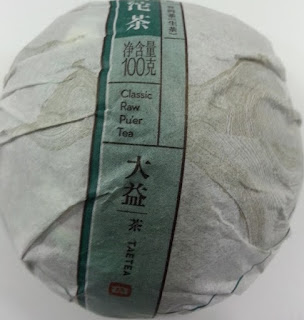 I wanted to find the orange, jack-o-lantern style pumpkins, to make a pie.  They commonly sell Thai and Japanese pumpkins here, and those would be fine, but the taste is a little different, and being November 2nd it seemed I might still catch some left-over Halloween related offerings.  I've bought a similar pumpkin in Isaan / Isarn, North-East Thailand, so they grow them here (maybe not exactly the same type), but the demand is too low for them to turn up.


I visited two Gourmet markets, in two of the highest end malls in Bangkok, Siam Paragon and EmQuartier.  There is risk of a very long tangent about malls in Bangkok.  Suffice it to say a multi-floor vegetation-intensive waterfall feature in one was nice, along with instrumental jazz in the background, but to me that type of higher-end commercial environment somehow seems soulless.  And they didn't have those pumpkins anyway. 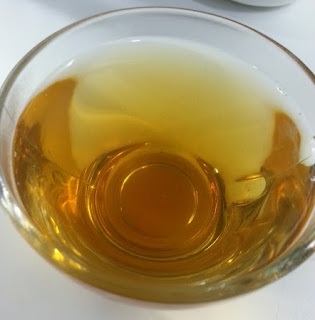 I didn't expect to buy any tea.  They had some different things, Thai jasmine green tea, a little oolong, nothing too interesting.  Ordinarily commercial pu'er is in that range, not interesting, but somehow I felt like my journey to pu'er had been missing something.  Recent exploration never covered that well-trampled common ground of trying ordinary commercial teas, or at least not enough of them.  One that caught my eye was that, a Menghai Dayi / Taetea brand tuoucha, apparently a two year old version of sheng, but with a label in Thai some details could've been clearer.

I'd have expected that tea to be bitter, smokey, hard as a rock, unapproachable, really the opposite of what I like in teas, but somehow I still felt drawn to it.  I had walked away from a similar tea in a different mall shop a year ago (in Paradise Park, again from Menghai, the most well-known commercial tea pu'er producer), and passed on a completely generic shou tuocha just a month or so ago.  It was a case of non-buyer's remorse.


I'll cut to the end, what the tea is like.  It's smokey, a little bitter, right in the middle between chewing on an aspirin and drinking a softer green tea version, something decent.  I think it could be even better if I can get washing off tea dust sorted out better; I typically don't use rinses to remove a substantial amount of tea dust, but with bitterness being an issue it seems best to get all that as cleared as possible.  It's not as compressed and ground up as I expected, but exactly as smokey as I'd imagined, with plenty of bitterness.  A colleague asked about the tea and tried it, someone who had a history of stomach problems, and I told him this is probably at the top of the list of teas to avoid related to that.  He hated the taste so that turned out to be secondary.


I expected the tea would loosen up a good bit over the next two or three infusions, then produce something more drinkable beyond that (using an approach in between gongfu brewing and western).  The tea did soften a bit by the third infusion, and the smoke diminished a little, but some sourness picked up.  After that the sourness faded as well, and the best of the tea came out, but there wasn't so much left in it, a few more longer infusions that tapered off.


Of course I've not really done a flavor description review yet, but then it's hard to get past smoke and bitterness transitioning to sourness, then fading to more neutral, but still a little sour.  Given that it's pu'er one can just throw "mineral" out there, maybe even "tobacco," and those might even be accurate to some extent.  There is flavor range below that, subtle fruit notes towards plum, and tweaking brewing might bring out more positive results.  Gongfu brewing using very short times should go better.


I tried to find out more about what it is, through online review.  Yunnan Sourcing sells a 2011 version of it (for $5.50; sounds reasonable, I just spent around $10 for this), and they describe it as such:


A high quality blend with that characteristic heavy Menghai are qi!  Good mouth-feel and huigan this is a great choice for aging... This is the 2nd year since 2005 that Da Yi has released a 100 gram tuo, and the 2nd release of the "Jia Ji" (lit. Premium Grade) tuo since 2003!


Finding out more is tricky, but that is a start.  This Shanghai vendor sells the same version I bought for $32.99; seems a bit steep.  There's an interesting review of the 2011 version on Steepster:


I could relate to that.  He reviewed it a year ago, so maybe in another five or so the tea could be more drinkable.  Or it could just be different but still not what he's looking for.


It's obvious why I bought the tea, isn't it?  I have a problem, a compulsion, not so different from being an alcoholic.  The tea will still be worth it anyway, a decent option for mixing it up.  It wasn't the kind of expense to get broken up about, nothing like waking up from a three-day black-out in another city wondering how much of my life needs to be put back together.  If I only drink some and manage to forget about the rest for a few years that would make for an interesting second experiment, both worth the expense.  It should soften up, lose some bitterness, and gain some complexity in that fruit / earth range.  Part of the appeal was to get more used to that young sheng profile anyway, edgier and more bitter tea than I'm used to, and it should help with that.


Also like an alcoholic it's best to not let my wife see tea coming through the house, since she makes it seem like the kilogram or two at home is way too much, that I should be clearing it before buying more.  I've been trying to get that drank down for half a year but tea trickles in as fast as I can clear it, even without really buying any.  I bought 50 grams of a Bai Mu Dan in Pattaya two weeks ago, at Tea Village, but that sort of doesn't count, just sampling.  Neither does this tea, anything I buy using cash and keep at the office, or samples vendors send.  And besides, pu'er doesn't count in general, it's supposed to age.  And really, I could quit any time...
Posted by John B at 10:59 PM