I recently went on a road-trip vacation (to the beach, Pattaya), the only time I tend to brew teas grandpa-style, reminding me to write about that subject.  This is one name for a very simple method of brewing, mixing leaves with hot water in something like a tea bottle or tumbler, then drinking the tea from that without straining it first.  I suppose an even more basic version could use a pint beer glass or mason jar, with teeth serving as a straining device.


The brewing method name is from the Tea Addict's Journal blog, a reference to that blogger's grandfather, but it's a common practice in China, per my understanding.  If you walk around the Forbidden City in Beijing many of the tourists have tea bottles with them, many only with wet leaves inside, awaiting the next refill and infusion.


The advantages and drawbacks are just what one would expect.  Uncontrolled brewing time eliminates the potential to optimize results, and not every tea is well suited for such an approach.  Since teas need time to cool to drink, assuming relatively hot water is used--175-212 F / 70-100 C, the standard range--longer infusion times are required, even beyond how long it takes to drink the tea.  The advantages are ease of preparation and mobility.  Once you get past adjusting process and preference your tea travels well, only requiring more hot water to brew another infusion, and with a thermos that can travel too.

Some tea types work better than others for such an approach, but for any it would be typical to back off the proportion a little or accept drinking some strong tea initially, which would weaken in later infusions.  On another road trip in Thailand involving more driving earlier in the year I tried a lot of types of teas prepared this way, and I'll add how those worked out here.


lightly oxidized oolong (Tie Kuan Yin, Jin Xuan, etc., with those being plant types that can also imply a typical preparation style):  to me this category is the natural fit for the approach, although I'd guess green tea is at least as commonly brewed this way in China just given its popularity.  These teas work well brewed very lightly or quite strong, to me, and hold up to lots of infusions.  Also potentially relevant, moderate quality level versions of the tea can be nice, so there is less tension between non-optimized brewing of a really good tea and still sourcing something good enough to be enjoyable, with related cost factoring in as well.  I just tried a TKY sample brewed this way on a trip that seemed a bit too good to be prepared like that; it will be interesting to Gongfu brew the rest and see how the outcomes vary.


green tea:  not ideal, it seems to me, since these can be a bit astringent, but that also relates to one's take on astringency.  In Vietnam it's common for green tea to be served with boiling point water in a teapot, the idea being that astringency is a good thing, or at least not a serious concern.  I remember panicking a bit the first time I experienced this since not long after five minutes I knew the tea would be ruined, per my expectations, but gulping down a boiling hot cup of tea wouldn't work to help stop the second cup from infusing more.  The same concern relates to brewing temperature; if only boiling point water is available that might not work well, to some, although I guess mixing different temperature water sources might cover that.  Vietnamese green teas are so nice, a bit mineral-intensive and very fresh in character, even for many modest quality level versions, so it really does seem a shame to brew those with boiling water or for long infusion times.  They really do prefer very astringent tea, it seems, so differing expectations is a part of that.


black tea:  ground up CTC Assamica variety teas are definitely not well-suited for this approach--familiar commercial Assam and Ceylon teas--but softer, sweeter var. Sinensis black teas can work out really well, or orthodox Chinese black teas based on Assamica plant types, like Dian Hong.  They typically don't brew quite as many infusions as lighter oolongs, but they can work well brewed stronger or weaker.  To me some types really work much better brewed to a certain strength, like Jin Jun Mei, or better unsmoked Lapsang Souchongs, or really any of the best black teas you would rather get just right.  But that still leaves room for others that can work out across a range of strengths, like this Jin Xuan based black tea from Thailand, or this Chin Shin based black tea from Taiwan.


white tea:  these can work really well.  You might not want to use this style on your favorite white tea versions, or something really delicate that benefits from careful brewing, but decent ordinary-grade versions of such teas are available, teas that could still be nice across a range of preparation styles.  It seems to me the idea of drinking these teas at different strengths already maps onto the two different lines of thought in white tea brewing timing (with more on that here), either shorter for a wispier, subtle version or longer for a version in the same strength range as other tea types, but somehow still subtle.


I've been drinking the last of a Ceylon Peony / Bai Mu Dan recently that shows this well, right in between tasting a bit like mineral water and indescribably full-flavored in catchy way.  I can drink glasses of it and just marvel at the subtle balance it strikes.  I wouldn't brew that tea grandpa style, although it would work, because it's too nice at just the one infusion strength I prefer.


other types, Dan Cong, Darjeeling:  it might seem like these two--which come in ranges of styles, especially Darjeeling--are too delicate, too potentially edgy / astringent, many with too much potential to squander, and too touchy about brewing to even be considered for this approach, but once you get proportion down and shift expectations about optimizing teas things seem to change.  Finding versions good enough to work well that aren't at higher quality levels that absolutely justify precise brewing can be a trick.  In that other travel post I'd tried a hojicha; the brewing approach worked well, but I just don't love hojicha.  Shou pu’er really would work, I’ve just not tried it. 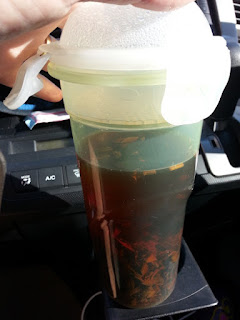 Sometimes it also relates to how much of a tea I have; if only a sample, enough to brew once or twice, I'm more likely to use Gongfu style brewing (or Western, depending on the type), but if I had a couple hundred grams of even a really interesting tea I might be more likely to experiment.  Since I typically only use grandpa style brewing when I travel by car it doesn't come up so much.


It seems like I've not really clarified how this works, that it's far too simple to actually work as well as Western brewing.  What brewing device would be best, or what tea proportion, and how can teas stand up to multiple long infusions?  All of that is part of the paradigm shift, moving away from narrowly isolating brewing factors, seeing which corners can be cut.  Of course scaling back the proportion a little might help.  Related to devices, specialized tea tumblers are out there, but inexpensive plastic tea bottles are the original gear version, something that seals and strains; that's it.  Experimenting with the rest is part of the fun, just less pleasant when experiments aren't successful.


Another natural question:  if someone had access to a tea tumbler that can stop brewing after three or four minutes, why wouldn't they limit that infusion time?  If they would never Western-style brew a tea for six or seven minutes then why drink a tea after ten minutes of brewing--or more--when it had time to cool enough?  In China, the answer might be "tradition;" because their grandfather prepared it that way.  Really someone would need to experiment with the preparation style, using different teas and parameters, to answer that question for themselves, to see if it made sense for them.

A tea friend just mentioned risk related to using really long brewing times, relating to contaminants or whatever it is supposedly only coming out after extended infusion times, and if someone believed that then they probably shouldn't go with this brewing style.  I had heard this claim before but never followed up in researching it, which probably wouldn't be easy to do.  In the form that friend expressed it there seemed to be a lack of clarity between concern over brewing a tea for a long time, for example leaving tea in contact with hot water for a very long time, and using leaves that had been around awhile, or even drinking a tea that had been sitting.  I'm quite certain the last two are of no concern, although it's a long story why I think that, and I'm just not concerned enough about any potential risk for extended brewing times to completely avoid it.


It would be possible to cheat the long-brewing assumption implied in the style, to add cold water 3 1/2 minutes in to suspend that process.  Maybe interpreting the style in such a different way isn't somehow invalid per any loose convention, even if some Chinese tourists might wonder what that's all about.  Of course even trying it out is optional.  There are surely many people in China that would never make tea this way, or visit the Forbidden City, or use the crowded subways, and it's fine for people to stick to Gongfu-style brewing or a Western approach instead.
Posted by John B at 7:06 PM