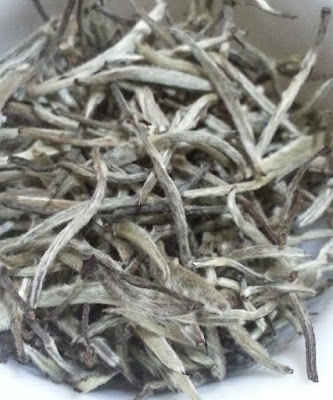 This tea was provided by the Nepal Tea company as silver tips, which relates to their Silver Yeti tea (with no mention of the estate / original source).  They sell a second really interesting looking white, a White Prakash by Kanchanjngha Tea Estate, which seems different in style.

I've reviewed teas from this vendor before, a Kanchanjangha gold tips and green tea here, and a black and oolong here.  Odd I was doing paired reviews like that, but somehow it made sense at the time.  Those were nice, good quality teas that were a bit unique in style, so it will be nice if this is more of the same.

It has nothing to do with these but I've also reviewed two other teas from Nepal in the past year or so, a Himalayan Orange and Shangrila White, again solid teas, unique and positive in character to say the least.  So I guess I like teas from Nepal.  It's odd how broad the range of styles they are developing extends.  Some are a lot like Darjeeling, which is relatively nearby, and some are quite novel. 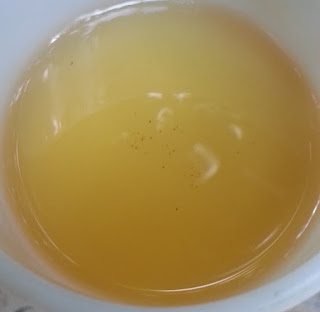 
The tea has small needles, on the darker side, with a sweet, rich smell.  My take is that darker needles can relate to more oxidation occurring during the preparation process (not a bad thing, just one style / outcome), or to a tea darkening through aging.  Either way it's not necessarily a good or bad thing; the brewed tea itself tells that part of the story.

The taste of the brewed tea is bright, rich, sweet, and full, right in the normal range for good versions of white tea.  The main aspects in terms of flavor are floral, a typical, pleasant outcome.  I'm not remarkably good with floral scents but it might be in the range of lavender, perhaps a little lighter, with sweet and more neutral flower scents in that range also relating to different types of orchids.  "Under" that flavor range there is the typical warm, neutral tones typical of silver needle style teas, dried hay and sunflower seed.

I've been off this page for awhile, similar white teas, so I'll need to refer back a few months for comparison.  I have been drinking a couple of Bai Mu Dan style whites quite recently, one from China and one from Sri Lanka, but those are quite different, richer in a sense but more subtle in a sense, without the same pronounced floral aspect.

Brewing the tea just a little stronger changes that profile a little.  I'm preparing it Gongfu style so it's easy to shift time around, from a relatively short infusion time of 15 seconds or so up to a bit over 30.  A tea like this really would produce a comparable outcome made in a more Western style, dropping the proportion of tea to water and increasing brew time to 2 to 3 minutes (or longer, depends on preference), but you miss a bit in experiencing aspects transitions.  The floral aspect remains, still pronounced, but light mineral undertones strengthen, something like limestone (hard to pin down since one only smells rocks, not taste them).  The dried hay / sunflower seed doesn't pick up in the same proportion, dropping back even more into the background.

It seems a nice white / Silver Needle style tea.  As a baseline, a version from Indonesia (from Bangkit Wangi, reviewed here) might have showed a slightly stronger bright floral aspect, in a very similar range, maybe a little sweeter, but both are nice for that same aspect.  It's impossible to compare the range of supporting aspects; my taste memory is better than my memory of names or phone numbers, by a lot, but I don't retain that level of detail.  I scanned through the Bangkit Wangi white tea review and it sounds pretty close, but I'm not far along with this one just yet so it could change.

The next infusion tells a similar story, with flavors transitioning from the bright, sweet floral to that combined with a nice range of other aspects.  The profile transitions more to that clean, mild mineral range. A different interpretation of a similar flavors range would identify it as a very mild muscatel, and the tastes complexity does extend across a good range.  The mineral moves from limestone into struck flint.  I love the smell of struck flint, by the way, although I have to go back to the early parts of my life to reference it.  It wouldn't work nearly as well without that sweetness and floral aspect, and the rich depth from the hay / sunflower seed aspect, which comes across as a clean, integrated, sensible range.

Next infusion, more of that same shift.  I think it might work better than it sounds.  That mineral taste couples with a cool feel, a hint of both the taste and reaction your mouth experiences when you suck on a penny, but only a hint of that, so it works.  There's an odd way that the experience passes across your tongue, with that feel I just mentioned occurring on the sides in the back, which transitions to a mineral aftertaste.

This might well be a relatively more oxidized version of a white tea, but I wouldn't really be able to say that with certainty, it's more a guess.  The brewed tea color is a bit dark for the tea type, not the light golden yellow but a dark golden yellow instead.  That is subdued in light infusions but the color difference is still evident.  I wouldn't really say that the taste experience and general effect is closely leaning towards a black tea, since it's completely different, but it might move towards a distant version of common ground, in some senses.  Along that line it shares aspects in Darjeelings though, not an Assam, Ceylon, or Chinese black tea.  It makes sense, since regional characteristics are closely tied (it's nearby, some tea plants are common to both), so of course it does.  Darjeeling is also made as either white tea or versions that fall in between those basic Chinese oxidation-level styles, so a white tea with a bit of oxidation would be similar.

How would I know if the tea hadn't been affected by storage, instead of oxidation being the only factor in that slightly darkish color and flavors shift?  It's a good question, but one I probably shouldn't even be asking.  I've kept previously opened silver needle for a good while before, over a year, due to just misplacing a version.  In that case I've seen an example of how those changes go, but it wouldn't be fair to extrapolate based on so little.  Doing just that anyway, the tea darkened in that case, and the flavor did shift, not losing a lot in terms of brightness or sweetness wearing off but more related to picking up depth in other aspects.

From there it just seems to fade slightly over many transitions, not changing further.  The general effect shifts a little within the same range as longer infusions are required to draw out taste, relatively common across the range of different styles, although some teas do shift at the end more.  The tea is quite nice, a good example of the type.  There was a time when I didn't really love silver needle style teas, more about just not relating to the aspects range than taking issue with any, but now I get it.

This was supposed to be a simple tea review, covering familiar ground in a quick tasting and write-up.  Oh well.  I still have a couple more samples from this vendor so I'm not off this regional subject yet.
Posted by John B at 10:34 PM