I posted about making a version of Christmas tea blend last year, related to seeing Twinings versions and such around.  It seemed like a relatively standard version:  black tea, clove, cinnamon, and orange peel (the standard set), along with some dried dark cherry and dried tangerine peel and fruit.  The trick was getting the clove spice to balance.  The taste of clove is warm and a little spicy, great for adding a layer to some other flavors, but spicy tea can be a bit much.  As with masala chai--related more to ginger adding spiciness--adding milk and sugar were the obvious ways to offset that.

So where to go next?  Christmas-theme flavors could include lots of different things, including candy-canes, a range of different hot drinks, and chocolates (see this blog reference covering lots of variations).  Chocolate; how to add that to a tea?  Blends mixing in real chocolate aren't unheard of (David's Tea sells a number of such blends), and I even dropped a Hershey's kiss into a tea once to see what that was all about, but it's not ideal.  The flavor range works but the texture is quite odd, I guess a little towards a hot cocoa.

Really adding anything to a tea or blend that's not completely water-soluble is unconventional.  Cacao or cocoa nibs are part of the actual cocoa beans used to make a tisane (herb tea, to some); that would seem an obvious way to go.  Related to that first naming split, my understanding is that the beans are cacao, and cocoa is a processed by-product used to make things like chocolate, or cakes, so the former might well be more appropriate.  But what's in a name.

Chasing down cacao nibs proved tricky; we don't have the same type of health food store options here in Bangkok.  Lots of things are quite equivalent here but that's not one; the selection tends to be a bit limited.  I was a vegetarian for the first five years we lived here--and a dozen years prior--and was surprised to find that protein powder, flax seed oil, and spirulina aren't easy to find, even in organic foods / health foods stores.  So strange!  I turned up a place outside Pattaya to buy the cocoa plants (I'll get back to that), and eventually sources for the cacao nibs (and one nice looking online source I didn't use), then bought some at Radiance Wholefoods here in Bangkok.  That vendor said people often use them with coffee; kind of makes sense, but I'd give them more of a grind if doing so myself, if I ever get back to drinking coffee.

But what theme / recipe?  Originally I was thinking black tea, clove, and chocolate might somehow balance.  Combining chocolate and mint seems obvious--like a peppermint pattie--but it doesn't sound good to me.  I thought back to my own experiences with Christmas and it hit me; we bought chocolate covered cherries for my parents every year as kids.

So how to make that next...  The cocoa / cacao nibs had that part covered, the sugar and creaminess were easy, just add sugar and milk or cream.  I ran across a foods display in our office building selling a version of dark cherry preserves.  Done!  I watched a China Life tea video on making an iced tea using preserves a few months back, adding a touch of fruit for taste, one video from a nice instructional series.  It sounded a little odd, slightly off the norm, but it makes perfect sense once you think it through.

Better to keep the rest short:  I made the tea.  I added a vanilla bean I had left over from a trip to Indonesia a year ago--a great place to pick up spices.  It seemed boiling the nibs and vanilla first made sense, to draw out more flavor, since those weren't going to give up their taste after a four or five minute steep as dried tea leaves tend to.  I kept tasting the "tea" all through the process, mimicking how I cook.  The nibs and the vanilla were tasting pretty good on their own after about three minutes on low boil.  Altogether I simmered it for a little over five minutes without the tea added about the same with it in.  As with masala chai I tend to make a second batch from the same tea and spices to see how much flavor was left in it, and it was only a bit thinner, not so different.

You might wonder what cacao nibs taste like as tea, and now I'm the right person to pass that on; they taste a lot like dark chocolate.  Baking cocoa sort of doesn't, really, it picks up a chalkiness, and sweetness doesn't carry through as well, and something aromatic gets pushed aside related to other compounds stepping forward.  This wasn't chalky, or dry, or even a touch bitter, it was just like dark chocolate.

As for black tea half that I used was Hatvala Wild Boar black tea, really way too good a tea for blending, but I bought a lot of it last year so I still have some around.  Another friend gave me some standard CTC ground-up Assam awhile back I also added. 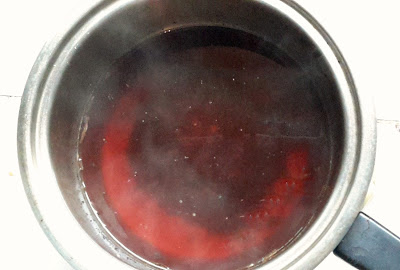 The tea was nice.  It doesn't require a taste-by-taste review since I've just listed the ingredients; it tasted like those, really close to what a chocolate covered cherry tastes like.  The balance was good.  A bit more cherry would have made sense, and swapping out milk for a mix of milk and cream would've worked better, but otherwise that was dead on.  I couldn't help but notice the only taste that wasn't exactly like those chocolate covered cherries was the tea.  Which leads to another natural thought, doesn't it:  why not try it without a tea added?  It was so well balanced there wasn't much other room for dialing in, just the bit about cream. 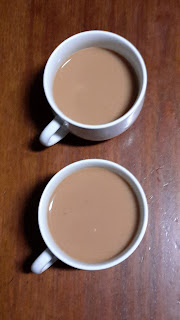 A bit on background context on that experience:  if I'd been drinking it while looking out on a snowy landscape, with Christmas lights blinking in the background, it would've been one of those classic, perfect moments.  But it wasn't like that.  It has been in the 90s in Bangkok for a few weeks now (in F; around 30 C).  That's not really a hot spell, just how Bangkok is, with the cool season running late.  It feels slightly cooler and dryer in the past couple days, to me, but some of that could be wishful thinking.  The same day I made that tea (and these notes) was my birthday, and I'd just made a pumpkin pie that is my token experience of Thanksgiving.  That was three days late, but there is no Thanksgiving in other countries.


I still enjoyed the tea.  I'm not really a flavored tea lover; plain is fine for me, with lots going on in better versions to appreciate.  But it was a bit awesome.  I'll tweak the mix a bit, maybe see if chocolate and clove really can balance in a tea, and see if my kids like a version closer to a cherry-themed hot cocoa, without tea.  I think grinding those nibs might work better, might really extract a solid blast of chocolate taste, as opposed to the moderate layer in the version I made.  My daughter and I ate a few small chunks after brewing and they seemed kind of close to eating a fragment of dark chocolate, not at all brewed to flavorless yet.


This past weekend I had a nice experience to fill in for missing Black Friday, visiting a crowded mixed-goods sale.  They had some good deals, and we bought some Legos, but it was horribly crowded and so, so loud.  Thai sales promotion often involves someone yelling into a high power sound system, as if attempting to override your central nervous system and your judgement.


I'm getting into the holiday spirit.  It's all going to be ok, another holiday season in a foreign culture, and even that mess the US is working through.  Appreciating the basics really puts it in perspective:  family, holiday foods and customs, and a nice cup of tea.
Posted by John B at 1:29 AM