A first review of the more interesting teas I bought on vacation, of an Oriental Beauty from the Lin Hua Tai shop in Taiwan.  That tea type is also called Dong Fang Mei Ren, and also Bai Hao.  I just wrote a post on shopping for tea there in Taipei, with more about the Lin Hua Tai shop, or their website or Facebook page would have more details.  They're not so easy to email or send a message to though, not really set up for that, but I guess in a pinch one could call them.


The tea looks and smells like it should, on the darker side, multi-colored, with lots of tips, and a rich, sweet, complex scent with a bit of fruit and spice. 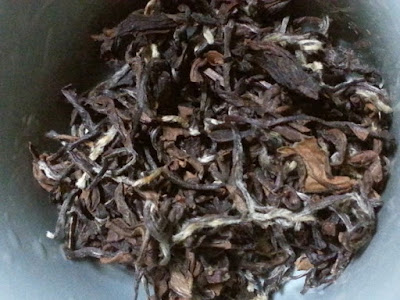 The taste is like that, just as it should be.  It tastes like a checklist of nice OB aspects:  sweet, light but rich, with spice, citrus, and a touch of muscatel.  The tastes are clean and distinct, not off, not overly earthy or muddled.  The spice effect stands out, some cinnamon, but then so does the fruit range and the brightness.  Sometimes the oxidation level in those drifts up towards black tea, which can work well, but this is well balanced as a slightly above average oxidation level oolong.  The general type is often cited as 70% oxidized, but then accounts of that do vary.


As I mentioned in the last post I found this shop with help from a lead from an American expat living there, Nick Kemble, who describes the type in this way:


Oriental Beauty (dong1 fang mei3 ren2 東方美人)
60% fermented, this fine tea has an amber color and earthy characteristics. Insects and insect eggs are intentionally left on the leaves when harvesting, imparting a unique flavor, and so it is typically grown organically. The dried leaves also have visible white tips, so it is sometimes called “white tipped wulong”. Oriental Beauty has gotten a lot of international attention lately, and some regard it as the world's finest wulong. It has a lovely honey aroma.


Of course that only touches on the idea that "bugs" (leaf-hoppers, a specific type) biting the leaves improves the tea aspects, related to a response by the plant that changes the taste.  I've written about all that before, in this post, which also reviews a Thai version, and the World of Tea blog did a nice article on all that, or there's always Wikipedia. 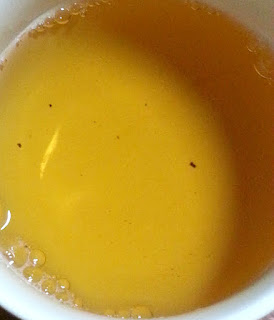 I tried brewing the tea very lightly first, like a long rinse, then at a standard level of infusion strength, light but not wispy, then a little stronger.  It worked really well at all levels, just coming across differently.  Astringency and body picked up when brewed stronger so that upper medium oxidation came across more towards the character of a light and sweet black tea.  Brewing lightly emphasized the sweetness and brightness, and the subtlety of the flavors.  I guess I liked it better lighter, even though I'm a fan of black teas.

One of my first thoughts was that I should've bought more of this tea, and that I shouldn't share any more of it (I gave some to a local monk before even trying it, not something I regret given that context).


Oddly I don't remember if this particular tea was their highest grade tea or second level (of four), although I think the highest.  For most it would've made sense to just get the highest grades / quality level (grade is used to mean something else as well, a gauge of tea leave wholeness as opposed to quality, but I do feel free to keep using common English terms as I choose).  The teas were selling for around $30 for 150 grams versus under $20 for the next highest grade, very fair pricing, what one would expect for a mixed wholesale and retail sales shop.


But it all added up a bit, what I spent on tea there.  I try to limit what I spend on tea, with my wife's encouragement. On the one hand a half dozen teas at the higher grade would cost a bit under $200, for nearly a kilo of quite good tea, a great value (and just a bit over what I actually spent).  Seen the other way buying the next highest level--also quite good tea--would save a third of that cost, and the quality of the different teas didn't seem to drop off sharply.


It's odd how in discussing tea in some online circles one might feel a need to justify tea expenses, and in others instead justifying limiting it.  Costs differences were even more pronounced in NYC where an expensive 50 grams of tea cost $70, and an inexpensive pound of tea about the same, of course in two different places.

Perhaps more than pricing variances it would seem more unusual that I didn't retain all the details about what I'd bought, that it wouldn't have been on an invoice slip and also committed to memory.  Memory isn't my strong suit, and getting worse, probably related to a genetic predisposition that has my mother repeating the same ideas now and again.  If I'm still functional but just a bit more forgetful in a couple of decades I guess I'll be fine.

As for the invoice issue the shop was a wholesale and retail vendor, so really as much set up to ship another shop a half dozen kilos of mixed teas as to pass on half of one to me.  Things seemed a bit informal related to walking in and buying tea like that, as if I was in the distribution warehouse of some tea district business.  At least the owner, Shiow Lin, and his niece both spoke perfect English (he'd lived in Pennsylvania, the State I'm originally from, commonality I mentioned in the first post).  Both of them were very kind and helpful, so it seemed like a very inviting warehouse.

This tea compares well with the other OB I've been trying, quite a few in the last couple years, but then how good is "good" is all relative.  There is always room for improvement, for other subtle positive aspects, or for that next fractional increment of refinement, but the tea is definitely nice.


Someone would need to be quite spoiled on high quality versions of Oriental Beauty to find much fault with this version.  As far as being a refined, complex, interesting and pleasant to drink tea it's definitely already where it should be.
Posted by John B at 11:53 PM