I revisited a Bangkok tea cafe that's been renovated recently, Seven Suns, in Ekamai. That was the place where the owner Han, with a background in traditional Chinese medicine, was trying different approaches to healthy blends and cold teas to help people transition to appreciating plain teas.


The cafe is beautiful.  It was nice before, but the renovation idea was to turn an outdoor space in a nice shopping center into a partly indoor and partly outdoor space.  It's quite hot in Bangkok about two thirds of the time, or maybe almost always, and now most of the space is air conditioned. 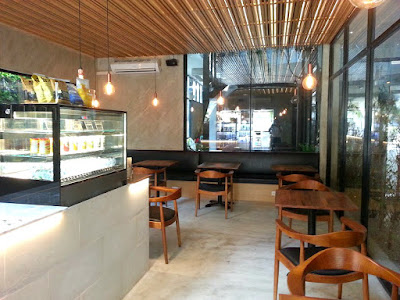 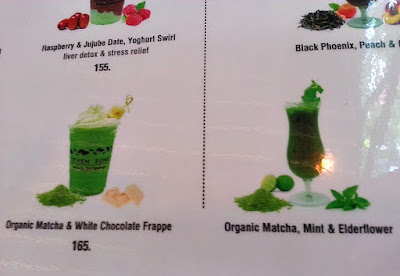 In this last post I talked to the Han about his ideas beyond introducing people to plain, traditional hot brewed tea versions (what I'm into).  He was developing blends, some based on healthier ingredient alternatives, in addition to just focusing on taste, with more focus on cold teas.  He was even dabbling in tea cocktails, using teas as a basis for alcoholic drinks.

All that progresses, and he still sells plain teas by the pot and loose (take-away), and some teaware, a good selection for including different versions of that.  A local article just went into a little detail on that range, with some nice photos. 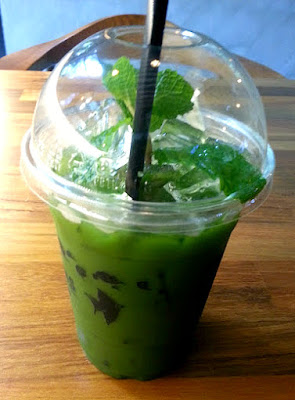 I tried a tea there again.  Normally I'd try the most appealing plain, single type hot tea but an exception seemed in order.  I  was torn between a matcha white chocolate frappe or a cold matcha with mint and elder flower drink, and went with the staff's recommendation for the latter.

I'm not really into matcha, even though in tea circles back in the US that's like a foodie saying they don't really get French food.  I've had it, and even took part in two formal Japanese tea ceremonies where they served it (both a long time ago--lets not get into that part).  But I've not tried it the appropriate number times that make that profile familiar; I've never acquired a taste for it.  Or maybe it's just that the Starbucks latte version really doesn't count, or that I don't care as much for green tea as any other type, and it's sort of in that general range.  I've even made it at home, although surely I bought an awful grade of it, even though I bought it in Japan.  I love matcha-based soft serve ice cream, for what that's worth; maybe I'll get there.


Anyway, the tea was fine.  It was iced, and came across a little like a juice with the flavor inputs of mint and some herb added in, bright and fresh.  It was a little sweet but nothing like the milk-tea level of sweetness, still on the natural side.  It occurred to me that I'd have probably liked it even better 20 years ago when I was more into juices and tisanes.  I probably would've also liked a more conventional matcha latte better, although I don't love those either.  I drink plain loose teas, steeped versions, and I can sort of relate to green teas, but I would only really miss Longjing if I stopped drinking any of those.  Lately I drink as much black tea as oolong, and not all that much lighter oolong, with white teas and pu'ers mixed in.

Where was I going with all this?  The iced teas and blends should be perfect for Thai tastes and brutal hot weather.  The shop has a nice cafe feel, and Ekamai is a good place for reaching out to trendy young Bangkok professionals.  They only need to make some numbers add up and it's all good.  I'll be curious to see how the range of new offerings maps onto the tea evangelist awareness function, if it really does work to sell floral blends and novel iced teas to help shift people over to "plain" oolongs and such.


For anyone local to here (Bangkok) there is a tea-social themed event there February 24th (link here), probably a good time to check it out and try some different teas.
Posted by John B at 10:11 PM