It's been awhile since I've had shou pu'er.  I liked the type initially, and drank quite a bit some years ago related to buying 7572 Menghai Dayi cakes on sale, reviewing different years' versions in this blog.  Somehow I just got away from it.  Whenever I see random cakes or tuocha--like this one--I always wonder how it might be (not so much with the single serving versions, those pellets; I've not had the most luck with those).

Sun's Organic Garden in NYC, on that recent visit mentioned in this travel-blog theme post, seemed the ideal place to give some a try.  This source of version wasn't described in detail but it was identified as aged, 5 or 6 years as I recall, plenty of time for off flavors that can associate with a more newely fermented shou to fade away.  As a moderate amount of tea the cost wasn't much, so not much risk related to that part.  I might also mention this was the last of this particular tea to be sold, so visiting the shop just to buy it wouldn't work.

The tea is shou, a rich, full, smooth version of one. Someone not familiar with the general type might be taken a back by the earthiness but it's what I'd hoped it would be, complex and clean as those go, but still in that really earthy range.


It tastes sort of like one would expect peat to taste, or forest floor, related mixes of organic compounds that no one would actually taste.  It's about as close to the range of lightly roasted coffee as teas tend to get, although not so close it that tastes a lot like coffee.


There's a bit of leather too, in the range of old baseball glove, maybe even closest to catcher's mitt versus baseman's glove or outfield.  Is it obvious when I'm joking?  The scent of the tea does conjure images of that sports equipment we played with as a child, including an old beat up and stretched out football. 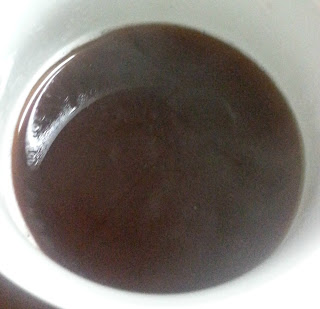 A second infusion isn't so different.  It might be cleaning up a little, but the first wasn't really musty or earthy in a bad or off sense; it was nice.  A faint trace of petroleum picks up. To most that would sound terrible, perhaps bringing forth an image and scent of changing the oil in a car, but fresh, raw crude oil is something else.  It has a beautiful, rich, sweet complex smell, not one that entices you to taste it, but much cleaner and more interesting than motor oil, new or used.  How would I know that? Being from Pennsylvania both my parents and grandparents had an oil well on their property, not high production operations but they produced, and I'd help go and drain off the waste water that pumped up along with the oil, one of many country-life chores.

Tar might also work as a description;  that is also related to fresh crude.  I mean that in a good sense,  as a trace of earthy mineral sweetness, like sweet, fragrant roofing tar, not the overwhelming blast of industrial smelling pavement construction.

That sweetness is nice.  That almost seems a contradiction,  doesn't it, saying it tastes like sweet peat, leather, and oil.  But it kind of does.


The complexity is also interesting.  Soft and full mineral tones below those forward facing aspects are harder to describe.  One mineral tone is a bit sweet, hard to pin down, something unfamiliar (I never will get back to that, so I'm not introducing the idea here for that purpose, just saying that describing one part escapes me).  Of course dark wood is also layered in there, very dark wood.  Or maybe it's two types, a dark mahogany giving it depth and a brighter redwood mapping onto lighter tones moving towards spice range, just not quite getting to there. 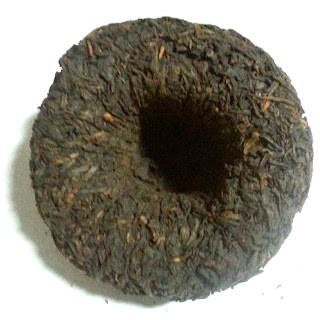 For all that description it just sounds like a nice version of shou to me, a typical profile, if the version is nice.  Another nice part about shou that's approachable and complex is that it brews a good bit of tea, it keeps on going.  I would expect it to hold up well, just not to transition flavors so much.  The third infusion bears that out.


Such a tea is also easy to brew.  It would be possible to use fast infusions Gongfu style to really stretch out taste experience, and potentially get the most out of it, or it works to brew it in a modified Western style and let it steep longer to be more intense.  It's just fine inky black and thick, or if preference isn't that relatively thinner versions would still offer a lot of flavor.  Or the reverse of those brewing approaches could work; brewing it stronger by Gongfu style and lighter by a Western technique (although that somehow seems less natural).  That would vary results a little but the range would probably be similar.


The next infusion lightens a little, even for lengthening brew time.  It moves a little towards spice, really in the range of redwood or cedar, to the extent those woods resemble spices.  A touch of petroleum remains,  which to me is nice.  Someone else might see that as a mild camphor component but to me it's not that, just somewhat related.  These flavors have moved into a brighter, lighter range to the extent someone might also start identifying fruit, or at least cooked sweet potato.  It's just not even close to the overall Chinese black tea range where that is more typical, still an earthier, different aspect range tea.


All in all it is just what I was hoping it would be.  Pleasant surprises can also be good but it's nice when a tea works out that way.
Posted by John B at 9:23 PM