Wuyi Origin Jin Jun Mei, and a bit of origins background on me 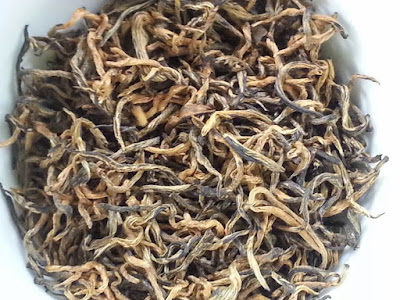 Back to the quest for the unattainable in this blog, a simple review.  I've tried different versions of this tea type from Cindy before (Cindy Chen, oft-mentioned in this blog), comparison tasting three last year, so this will just be passing on how this experience goes, nothing new.

I've ran across a Reddit post of someone cross-reviewing different versions of this tea type not too long ago (possibly including this one, or at least a related tea also from Wuyi Origin).  And also the typical vendor claim that only a very limited range of versions are "real Jin Jun Mei," and everything almost everyone but them is selling is something else instead (or maybe also the other few vendors making similar claims, I guess).  I'd mention an example of a related claim but it would come across as blaming them, and there could be something to it, I'm just not buying it.

I didn't get a full description of the tea from Cindy, but if it's the same version as on their website then it's "2017 Honey Aroma Jin Jun Mei," which to be honest doesn't really mean anything to me.


The dry tea smells rich, sweet, toffee-like, and a little earthy, with layers to what is going on in the scent.  Of course dry scent doesn't always match the brewed tea characteristics.  I'm still getting over a cold, the same one I had a week ago, probably because I went ice-skating last weekend before I was fully recovered.  Hopefully I've got enough sense of taste left to do this tasting justice; it's the usual feeling a bit off, not the full-blown version.


The first infusion is great; kind of what I expected.  The taste is rich and full, a bit sweet, with lots of layers of flavors coming across.  It's not as if one aspect hits you first; the impression is that there is a lot going on.  It's grounded by a very clean earthy range, towards mineral, a bit of the rock common to that region, but nothing like how that comes across in the oolongs.  A dark caramel or toffee fills in the sweetness (or it could seem a little like honey; I wrote that part after looking up the listing), joined by a roasted chestnut-like aspect.  Some of the sweetness traces off towards fresh roasted corn, but the tea doesn't really taste like corn, it's more the way that cooked sugar effect works out.

As comes up regularly there is more to the experience that's hard to describe, something positive and a little unusual.  I'm reminded of former-blogger Amanda describing some Dian Hong as possessing a resinous quality; there is a richness and a feel to this tea that reminds me of such a thing, a way that it coats your tongue and remains as an aftertaste.  More will come up in the second round; it's often easier to tease apart the flavors based on a slightly stronger infusion (although still moderate, for this tea type, there's no call for brewing it strong), and experiencing the basic range first helps with sorting out finer level of details later.

I know I said I was going to keep this simple but now I'm curious what that one review said about it, so I'll take a look and copy it here before getting into the next round.  Typically I'll taste teas blind, but that just depends.  It's not that long so I'll cite the whole thing:

There were actually two teas that I tried from Wuyu Origin - the 2017 Jinjunmei (honey aroma) Grade A and 2017 Jinjunmei (honey aroma). I think they were very similar, with the Grade A being a bit sweeter, and maybe a bit more flavorful overall? The Wuyi Origin Jin Jun Mei is probably my favorite tea in general - I like this more than any others that I've tried (any kind of green, black, puerh, etc.). The dry leaf has notes of sweet bread, wood, and some kind of nuts (maybe almonds). After a rinse, the wet leaf has strong notes of chocolate and raisins. It still retains some of the notes of sweet breads/pastries that you could smell from the dry leaf as well.

A first infusion has a great flavor - a subtle sweetness. Things like rose water, and sweet pastries come to mind. The taste is clean, and (maybe disappointingly) the tea doesn't exactly "coat" my mouth like some other more oily feeling teas would. Later infusions dull the sweetness, but a constant taste of fresh bread remains. Overall, this tea was relatively cheap compared to some of the other ones I've tried, which makes it easy for me if I want to get some more.

I would highly recommend this tea - even if you weren't looking to try Jin Jun Mei.  10/10


Nice complete reviewing, but without rambling on, a good balance.  Rose water, sweet pastries, and later fresh bread; maybe.  As far as this tea costing relatively little it was almost certainly the only version purchased directly from the producer.  The other teas had been bought and sold, perhaps multiple times, with every additional resale step adding cost but not value. 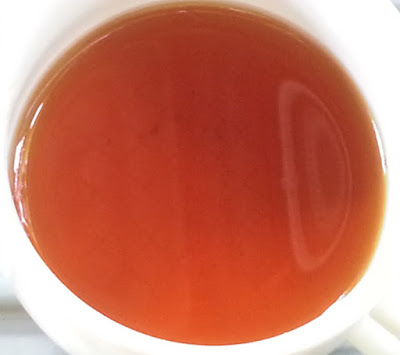 The next infusion has transitioned a bit, not less complex, but a little brighter and sweeter, a bit less earthy.  That resinous aspect (feel and taste related) did seem to shift a little towards yeast or pastry, with the roasted chestnut range dropping back.  I'm not sure about that gap in feel; it has diminished a little already, and it never did remind me lots of oiliness, more in between that and a typical roughness of astringency, on the novel side.

I think the interpretation-space is the issue here; I was calling something roasted chestnut that was probably alternatively interpreted as sweet pastry and fresh bread (assuming it is the same tea, which isn't a given, since they make more than one version, and he or she reviewed two of them), and I think both could sort of work.  I tried a Bai Ye dan cong black tea not long ago that wasn't far off related to that aspect, with it coming across more as baked sweet potato.  If you drink this tea and think "roasted sweet potato" that's it instead.  It's also not far off cocoa, just not exactly that.

I read through my own post comparing three Wuyi Origin JJM versions last year (a golden version, and one "good in soup," another "good in aroma").  I don't know which this would relate to; maybe the golden one.


This tea is thinning a little on the third infusion.  There is still plenty going on but the intensity and complexity have already leveled off a bit.  I've been using relatively long infusion times for the tea proportion, a good bit over a minute, and brewed very lightly the tea would stretch to produce twice as many.  This will still produce at least a couple more nice infusions, maybe even three of four, but I'd expect the flavor range to keep narrowing and for the taste to go towards woody or pine.


Some teas have an ideal brewed intensity that they work best at; I tend to notice that for Dan Cong or Wuyi Yancha (oolongs).  For others it really just depends on how someone prefers the tea; I guess various white teas work well for an example of that.  This one probably works well across a broad range, just balancing aspects differently. 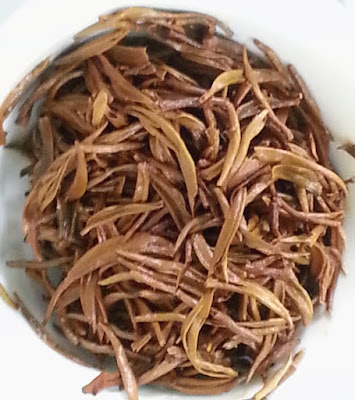 Even with extending infusion time the tea is fading.  It's not going "off" in any way, maybe picking up a hint of coffee-like aspect versus the pastry / sweet potato range, more than becoming woody.  I'll keep brewing it but there won't be any more to say.


All in all it's another great tea, not so dissimilar to the same versions I tried last year.  I can relate to why that other reviewer rated it so highly, and per my own past experiences it would compare well to any other version of this tea type.  Unless this isn't Jin Jun Mei at all, and then who knows.


An unrelated post-script; about local Pennsylvania scenery and history


I mentioned being from the small town of Cranberry, PA in a recent post (hardly even a village, really).  That related to describing a tea as a little tart, and that high school mascot being a "super-berry."  A friend just posted some photos of visiting back there and I wanted to share what it looks like.


We would bike along the area in the pictures when I was younger, or even canoe there, getting dropped off in one place and floating along to another, sometimes the next day.  It was a different world then; we even did that without cell phones.  It's an area with a long history, well prior to Europeans visiting there.  The local Iroquois Native American people went by the name Seneca "Indians," which was also the name of the "town" that high school was located in (more or less just where some roads cross each other).


I've ran across a bit of that history in this local reference not long ago (referenced here).  That is related to another place known as Cranberry that's not that far away; funny how that worked out, but obvious enough why it would have, related to the berries growing in both places:


The Indians gathered and ate many kinds of wild plants and roots. They ate walnuts and hickory nuts, wild grapes and blackberries. In marshy areas, or bogs, along Brush Creek they gathered wild cranberries. They mashed the cranberries in dried venison, or deer meat, to make meat patties they called pemmican. They used cranberry juice as a dye...

...Another important Indian village was the Seneca Indian settlement of Venango. It was located at the mouth of the French Creek on the Allegheny River, about 50 miles north of Cranberry Township, where the town of Franklin is today.

From Venango, the Indians could travel by canoe down the Allegheny River to visit and trade with Indians in downriver communities. One of those downriver villages was a Delaware Indian town called Shannopintown. It was located where Lawrenceville is today, about three miles upriver from downtown Pittsburgh.

Because the Allegheny is a swift, rocky river, the Indians could not easily return by canoe to their home village. Also, the Allegheny is such a winding river that the distance from Shannopintown back to Venango is much longer than a direct overland hike through the forests. So the Indians used a footpath, the Venango trail, to walk back to Venango.


That reference goes on to talk about George Washington visiting Venango during events leading up to the French and Indian war, nothing really so relevant to this tangent, so I'll leave it at sharing the pictures.