This is an edited section of a very long write-up about Tea Advice for Beginners (which other perspective and reference link sections in that), converted for posting by TChing, but similar to that original post section.

The general theme is more direct vendor sourcing options, how to buy tea that hasn't been bought and sold through an extensive wholesale sourcing chain.  Why not do that?  Each step adds cost but not value, and potentially limits the accurate information any one vendor in the chain has about the product.  You can still buy mediocre, over-priced, or falsely advertised tea directly from a tea producer, of course, so the same type of buyer-beware concerns still apply.

About shipping costs:  it probably wouldn't make sense to buy only 100-200 grams of tea from any overseas source, related to product pricing typically being lower but shipping higher.  Since shopping-cart style sites often show final pricing and shipping costs before check-out it might be possible to get an estimate of that before ordering.

To be clear, I'm advocating that people also support local physical shop options, since if you don't give some of your business to them you may lose that valuable resource.


Pu'er:  pu'er is mainly sold as either "factory tea" or as less mass-produced commissioned production versions (which is not an exhaustive list).  The main producer of factory pu'er is Tae Tea (also referred to as Dayi or Menghai), but with the focus here on sources I won't be going further into description of either category, or getting into tea claims and counterfeit tea issues.


A friend once described one main pu'er source, Yunnan Sourcing--now with a US branch--as the Wal-Mart of tea, which I think he meant in a good way, as saying the value is good and quality consistent.  They sell both types, their own commissioned versions and lots of factory teas.   White2Tea is more or less the other main pu'er vendor that sells their own teas, not described by origin per a marketing strategy that is a bit complicated to go into.

Farmerleaf:  This is a vendor and pu'er cake producer based out of Yunnan, that also resells other tea types.  I've reviewed some of their teas, and liked them, but to be honest my own pu'er experience is limited enough that I'm not the best person to put quality levels on a scale or judge regional type characteristics effectively.  Now that I think of it for the most part that goes for all tea types, and for taking advice about teas in general, from anyone.


Wuyi Origin:  an online friend, Cindy Chen, is a tea farmer in Wuyishan who now sells teas directly (the oolong type from there, Wuyi Yancha, and black teas, and some white, etc.).  They're not just any teas, but local award winning quality teas, much better versions than tend to turn up in tea shops, at least per my own experience.  There must be other examples of a real tea farmer setting up a direct sales site but it wouldn't come up often. 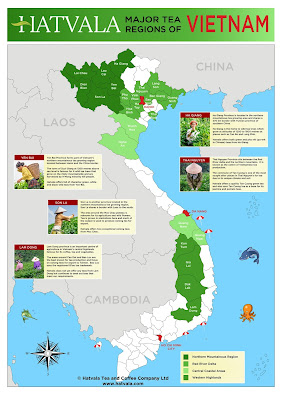 Hatvala:  As a Vietnam based reseller of local small-producer tea sources this isn't direct sales, just more direct.  It's a bit subjective but per my take their teas are great.  They also commission production of great jasmine black tea, Earl Grey, and lotus flower infused teas, a local type.


Kinnari Tea is a similar (but different) type of vendor selling local farmer-produced teas from Laos.  Their business back-story and the differences in relation to Hatvala are fascinating, but all too much to cover here.  Related reviews of teas sold by both in other posts tell parts of that story.

Gopaldhara and Toba Wangi are two other direct producers (in Darjeeling, India and Indonesia, respectively) that represent both options and limitations in buying tea directly.  Gopaldhara sells tea directly in India, and through other supporting external suppliers in all other locations, through various supply chains.  It's worth noting that large plantations anywhere will produce and sell a variety of teas, related to different local growing areas experiencing different micro-climates, and growing different tea plant types, etc.  Toba Wangi is a smaller producer in Indonesia that does sell teas directly (good teas, I might add), but mainly relies on other vendors and other types of supply outlets, and few of their products probably ever make it out of Asia.


101 tea plantation is an example of a main Thai producer that also sells tea directly.  Per my understanding there are only a half dozen main tea producers in Thailand, and although end customers wouldn't typically know it small online vendors are mostly selling comparable products from those few sources.


I've recently been reviewing Assam (Indian tea) from a small co-op producer (Assamica Agro), and there are good stories to pass on about Nepal tea sources that I also skipped (with one related source mentioned in this post).  That's far from an exhaustive list, more a sample of some of my favorite examples, selected to include a few source types and countries.
Posted by John B at 9:00 PM