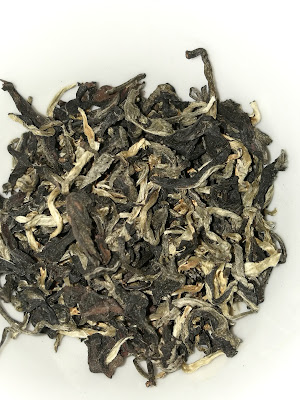 I exchanged some teas awhile back with an online friend in Vietnam (or contact; whichever concept you would use), Huyen Dinh.  I did finally get around to sending her back some tea but I won't go into what: just some of what was around.

It's a little unconventional reviewing the teas she sent because I don't know specific sources, who produced it.  That's true if you buy a tea from a typical online producer too; they would sell it as this post is labeled--with type and area--but the origin wouldn't be more specific.  Any potential marketing angle drops out since she's not selling this tea, she's just another tea enthusiast.  In a way that almost seems better.

Here is a map reference of where that tea is from, Ha Giang, right beside China, a reference from Hatvala (one of my favorite Vietnamese tea vendors).  They sell an amazing Oriental Beauty version, which I reviewed here, that is quite type-typical compared to Taiwanese versions, only exceptional for being an above average quality example.  This will prove to be a bit different, not necessarily related to being inferior, but different in character. 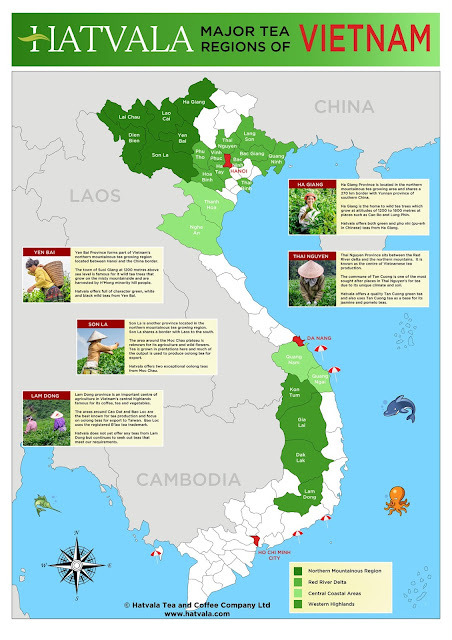 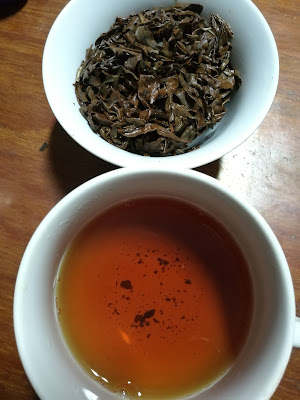 My first impression is that it doesn't look exactly like a Taiwanese OB, which are often more brown and white, with multi-colored shades related to those.  This has more of a black and white appearance, more similar to a moonlight white or a bit like the Vietnamese snow teas.  It's quite well twisted, so compact that I overshot the quantity a little and ended up with a gaiwan mostly full of brewing leaves once it infused.  That doesn't throw off the brewing effect, in most cases, it just requires using really short infusions.

It's quite heavily oxidized, really a black tea in an Oriental Beauty style.  OB's are a very oxidized version of oolong (70% gets mentioned sometimes, but it's hard to be sure of what that means, or if it doesn't consistently mean any one thing).  It's not so unusual for some versions to seem to blur the line, to be that little bit more oxidized and to seem like a novel black tea instead of a well oxidized oolong.  How well the aspects and overall effect work out are more important, although I guess someone else might value a tea matching an expectation of a type more than I do. 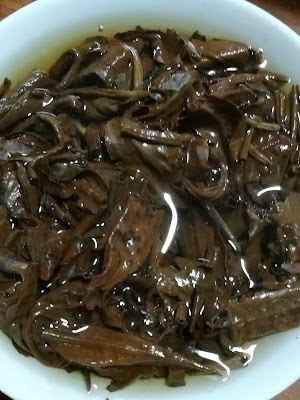 The brewed tea flavors include some earthiness typical of black tea, that malt and mineral range, and also plenty of fruit.  Mineral is pronounced but I'll skip guessing out what rock it tastes like ("warm" will do; not like limestone).  That fruit range isn't the typical light and bright OB flavors (citrus, muscatel, spice), but instead deeper fruit flavors, black grape, raisin, currant / elderberry, and some limited brighter range towards mango or pineapple.  The overall effect is unique, a mix of other types and styles.


It does transition through infusions, with some of the heavy mineral and maltiness giving way to even more dried fruit.  The fruit effect brightens; the black grape and currant seems more like blueberry as it keeps going.  It's a very cool aspect range and overall effect, especially that transition cycle.  But also the balance the aspects strike too, the way it comes together.  The flavors range is very complex and clean, and the feel is nice and full, with no notable flaws.


It reminds me a little of an OB version from Yunnan, from Farmerleaf (which I reviewed here; they take down their own site pages once a tea is out of stock, so there isn't one).  Looking back the flavors range was a bit different, with that warmer and slightly earthier, mixing in cinnamon, pastry, and heavier fruit (raisin and cooked yam, a bit in between fruit and a sweet vegetable range).  Both are unconventional in appearance and character.  Both are relatively more oxidized and off-typical-region versions of Oriental Beauty.  With Farmerleaf teas coming from Yunnan (and that tea from Jing Mai, within Yunnan) these aren't produced that far from each other.  I could speculate about similarities related to local climate or plant types used but I really have no idea, it's just interesting to consider.

I really liked this tea.  It wasn't as light and bright as some Oriental Beauty versions are, but for more typical examples you have to get a really good version for the bright, intense flavors to be really complex and not exhibit any musty earthiness, or to not transition in a way that's completely positive.  I'm not claiming that medium quality OB versions tend to taste like cardboard, the point is that only better examples show off that intense fruit range in a really clean and bright way that holds up through an infusion cycle, typically transitioning some in nature as you brew them.  This fruit and general character is different, more of a black tea, with some heavier fruit and some nice berry aspects, but it paralleled how it works out for quite nice more-typical OB versions in that range.

You can usually adjust parameters and get some variation in aspects from an OB, with them performing well across a range of preparation approaches, and I'd assume that's true of this tea too.  I don't have lots of it but enough to make it again, at least once or maybe twice more, so I can check on that.  For some that would lead to the challenge of optimizing the brewed tea character, dialing it in, and for others messing around and exploring changes would be more the point, but it works out well either way.

Many thanks to Huyen again for providing interesting, unique, and pleasant Vietnamese teas to try.
Posted by John B at 8:38 PM