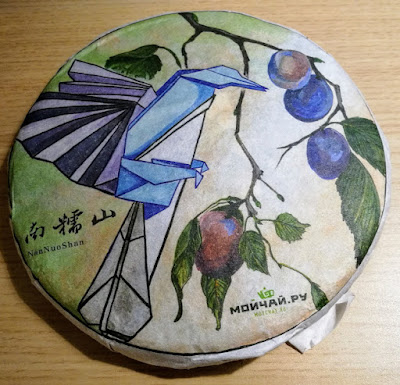 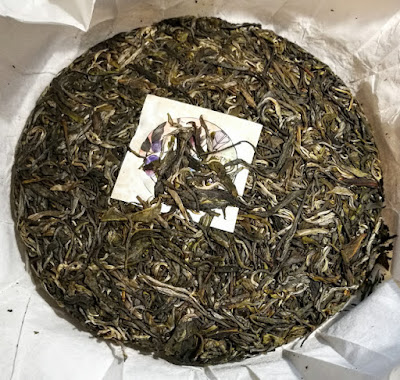 I already mentioned buying a nice Nan Nuo sheng cake in St. Petersburg, from the second Moychay tea chain shop branch I visited there.  I just didn't review it, which I'll cover here.  Chance led me to that shop, along with Google Maps search results, surveying the area near our hotel.  It's right beside a vendor just starting a business selling Japanese teas I dropped in on there, but not being into Japanese teas so much I didn't even try one.  It wasn't really a cafe or typical shop outlet anyway, more of a distributor, but cool to know people are working on different things related to tea there.


The initial infusion the tea is nice, as I remember it, very bright and fresh.  Astringency and bitterness are a little more pronounced than I remember because I'm preparing it brewed a bit strong for this first infusion, using a relatively standard high proportion of tea for Gongfu brewing.  I let the time run a little long, out toward 30 seconds, as a result of talking to my daughter about something.  I was thinking of writing about how low bitterness and astringency really could be a limitation of this tea, since those are connected with aging potential by many (issues it'll take me years to piece together more), but this tea isn't thin or soft. 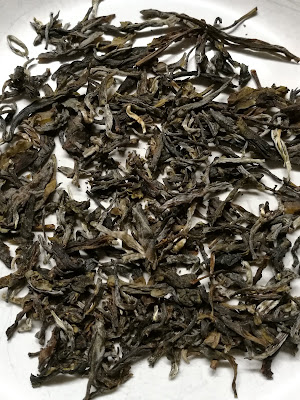 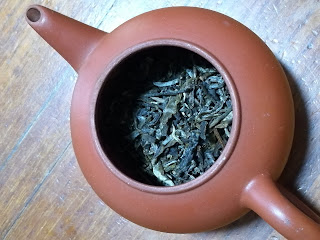 Prepared more normally the slight bitterness works in combination with the sweetness and fruit, which I'll say more about over the next couple of infusions.  It also still allows for a pronounced aftertaste aspect of the tea; it draws out over a period of a minute or so, fainter but still present after that.  That particular aspect isn't really long or pronounced as better sheng versions go but in the range of decent sheng, per my limited experience.

I tried a flash infusion on the next round.  Astringency and bitterness drop way back, although aftertaste stays consistent, still pronounced for the first minute, remaining after.  The tea was described as tasting like fruit and it really does, plum and white grape.  That bright, sweet flavor and overall freshness are so pronounced that it's hard to notice much beyond those aspects.  There is more going on; some warmer aspect range fills in more flavor experience grounding the rest, maybe towards a hint of nutmeg.

Mineral range seems the right description for covering what tastes that bitterness and astringency map back to (as much as flavors and feel seem to tie together related to the second, probably as much my interpretation as an objectively solid link).  Or it also tastes a little like a touch of aspirin, I guess, but invoking that seems unwarranted for this tea.  Maybe a very light metal aspect is closer than mineral, or traces of both together describe it.  Mineral and even bitterness can be very positive when those balance well (and it's hard to imagine sheng not including any mineral range, really), and they do balance in this. 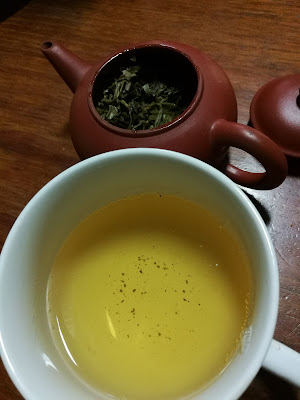 I love the fruit in it, and that overall "bright" effect.  Often when I'm drinking sheng made within the past year I'm saying this might be better in a year or two, a little less edgy, but in this case I'm not so sure.  If that brightness were to decline, as it would to some extent, the balance might be just as positive, or more so, or the tea could've been best drank when very young like this.  I'll have to try to not drink or give away too much of this tea so I can keep trying it over the next few years.


Lately I've been going over value and cost a lot more than previously in posts.  The idea has been that what a tea is sold as defines part of how well it lives up to that billing.  A tea sold as a "basics" $6 / 50 gram Dian Hong (Yunnan black tea, really a general range of types) isn't supposed to be on the same level as a similar version sold as a "high quality level" $16 / 50 gram version.  Forgiving some limitations of range or very minor flaws in the first tea sold as "average" would match those expectations; a tea sold as the second wouldn't meet seem to without covering such scope and including a bit more complexity and depth, and being distinctive and interesting in some way.


On this version's page instead, related to sheng, a tea sold as a $35-45 factory-produced decent sheng should show some nice character (or maybe potential, depending on the aspects theme), and be pleasant enough, without significant flaws that detract, but a tea sold as a $60+ privately commissioned version should go further.  This is the latter; I paid just over $60 for it, if I've got the exchange rate right.  To be fair that may equate to paying slightly less for an online shop version; physical shops tend to price in a bit of their higher overhead.  That's reasonable; being able to talk to a human in person or look at things adds some value.  It's a longer story about how it seems to me that expectations shift (in terms of desirable aspects) as one moves from basics sheng into better versions, a process I've not experienced that much of, relatively speaking, since it takes lot more exposure for this general type.  Oddly enough--for having just spent time introducing all that--I'm going to largely drop that sub-theme and just describe if the tea meets my own expectations for a tea in this type of quality range. 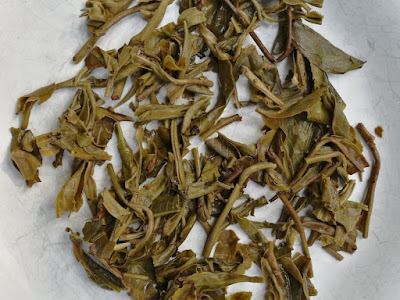 Since I love that flavor range and the overall effect and other aspects really work for me it does.  It wasn't so long ago that someone asked in an online group about what shengs are fruity, seeking out that in versions, and I commented that maybe other tea types would be a natural better fit.  Some oolongs are really fruity, for example.  Floral aspects comes up a lot in sheng, and mineral base aspects, lots of directions of complexity in aged versions, etc., but I've not experienced much for a very fruity sheng.  This one is an exception.  It's not just that; the balance of the aspects really works (for me), related to pronounced sweetness and all the rest.  So far this is my favorite of the teas I've tried there or brought back from Russia.


Bonus review; a compressed tea of an unknown type


I mentioned buying a compressed tea sold in the Moscow Moychay branch as "not a standard hei cha," a version we gave most of to a monk (in this post, reviewing Laos teas made by Russians).  I've included pictures of it before but I'll add them again here. 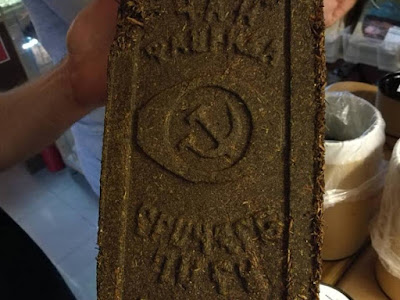 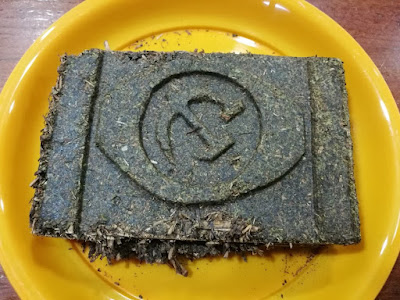 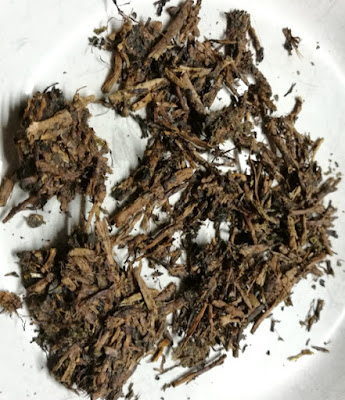 It raises a lot of questions, doesn't it?  What is it?  How in the world did they separate out that middle part, and why?  What might that taste like?

I don't know what it is.  I'm going to keep assuming it's actually tea (and it was sold as such) but even that could be clearer.  They cut the large block with a saw in the shop.  My wife requested a section that included that symbol, since somehow that made sense to her related to giving it away as a gift.  I often feel bad for people who deal with my wife (not so much including me; I brought it on myself, and she's generally ok beyond being difficult).  Obviously the tea contains some stems, and smells as earthy as it looks.

I'll keep the review part short:  it's earthy, to a degree no other hei cha or shou I've tried ever reached.  It tastes woody, a bit like aged barn door might, with a light version of peat or tree bark as alternative descriptions.  The tea doesn't brew completely clear, and the liquid is actually brown (which I've not photographed yet--a bit of a gap), but the taste is a lot cleaner than it sounds for being in that range.

I'm not sure if I like it but I think I do.  Sometimes new versions of tea are so far removed from expectations that it really takes time to settle into an opinion.  It's not a standard flavor or other aspect profile for tea, for sure, but the novelty counts for some points.  I guess it works for me in the way Liu Bao does (a type of hei cha).  I reviewed five of those last year, none the exceptional quality level 20 year old version that might be ideal for the type.  They're earthy, in a different sense than this tea is, but it's possible to appreciate them for an unusual range of aspects, if someone can adapt preference to extend to that range.

It more than meets my expectations for trying something unusual and inexpensive, and with more exposure I might come to like it even more.