I'll try to keep this simple and short, and just describe this tea (this year's Wuyi Origin wild Lapsang Souchong).  I've had it before so it should be familiar, just a matter of revisiting it and comparing it to past years, to the extent that my memory can do that. 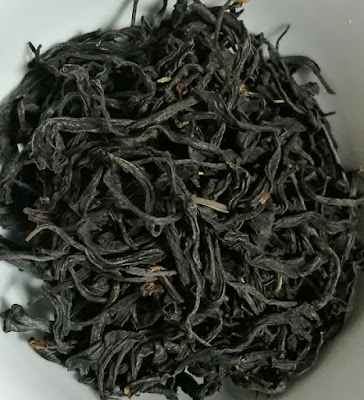 The taste is rich and sweet; that is familiar.  It's less citrus oriented than I remember, but more complex.  There is a bit of what could be interpreted as citrus but plenty more to try to separate through description.  Of course it comes across as a unified, complex range of integrated flavor, not as tasting like a lot of separate things as a review list-style description would imply.  It just tastes like very good Lapsang Souchong.  Of course it's not smoked, so not like that.


There's a catchy, positive distinctive part of the flavor that I'm not pinning down, close to fruitiness.  To me it seems in between a mild sweet malt (not like in Assam, like in a slightly fermented sweet grain) and leather, possibly with some integrated floral input.  There is no astringency to speak of; it doesn't come across as thin but there's no trace of any harshness.  This tea has about as pronounced an aftertaste as any black tea ever would.  That catchy main complex flavor element (or set of flavors) lingers on, tapering off for a minute or two, not completely gone after that. 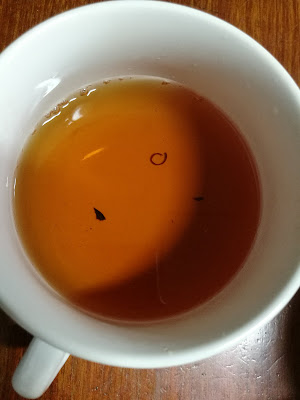 The citrus effect is in the range of orange zest, but not in the sense of a tea like second flush Darjeeling or Oriental Beauty can be, not as pronounced and intense.  All the flavor components are so well integrated it really does come across as one flavor, but it's very complex, an interesting effect.  There's a brightness to the flavor and overall effect, and a depth too.  I checked how they described it on the website:


Ripe Peach aroma, with very obvious milk flavors. Last more than 10 infusions. No any kind of bitter even you steep the tea for a long time. Quite bright in the tea soup, orange color


Of course when you think "peach" it seems to be that.  They're right that it's that subset flavor of ripe peach, nothing like the tangier, different range of a typical grocery store peach, fruit that hasn't been naturally ripened and never will completely get there. 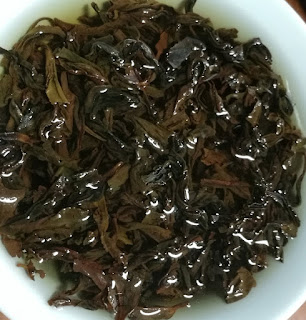 That reminds me; I've probably had no peaches at all in the past 10 years, or in the two years prior in Hawaii.  Or the pears that are common to North America too, only the Asian kind.  For all I remember this might taste a bit like a fresh, ripe nectarine too; maybe even a little more like that (a close relative of the peach, as a hybrid from those).


The tea is creamy, but it's odd describing that as milk flavors.  That's closest to the part I was matching up with malt.  It tastes like milk powder does more than fresh milk, that sweet flavor towards malt.  Fresh, whole unprocessed milk probably matches much better than what we drink from grocery stores, the way that much higher fresh cream content would come across.  Or I guess it works to just compare that flavor aspect to cream instead of milk.


About mentioning the trace of leather awhile back, it's possible to emphasize the softness, fruit, and sweetness of this tea simply by using water a bit off boiling point, or also possible to get to a relatively different effect by using boiling point water, or closer to that.  By the first I mean in the range of 90 C; 85 would still work but much below that and flavors just wouldn't extract well.  Brewed hot a trace more edge comes out, a touch of leather, and a bit more toffee effect, with the citrus shifting from a bright near-peach range to a dried orange zest effect.  An Assam drinker might like it brewed hotter, shifting the profile to that, and a lighter oolong drinker might prefer to maximize the fruit and softer effect by going a little cooler.

I remember citrus being a bit heavier in earlier years' versions of this tea but this one seems better related to overall intensity, complexity, and a well balanced range of positive aspects.  Of course it really does produce a lot of infusions, as they mentioned in that product description.  This tea would still work well brewed Western style but for a version this exceptional it seems well worth the extra messing around to use a Gongfu approach, to experience more rounds and track how minor variations play out.  I get it that lots of people would want to optimize every infusion instead, to draw on past experience and prepare each exactly as they like the tea best, and not experiment with variations so much, and of course that's not wrong.

This reminds me of the first time I tried better unsmoked Lapsang Souchong, just a bit before I even started this blog, so something like 5 years ago.  The main taste range was pretty close to this tea but the fruit range and overall intensity weren't even close, with nothing matching up with that cream-like aspect.  A touch of cardboard filled in for that instead.  It's funny how really good versions of types of tea enable the style to make lots of sense, how the overall effect is so different if the tea just isn't quite as refined. 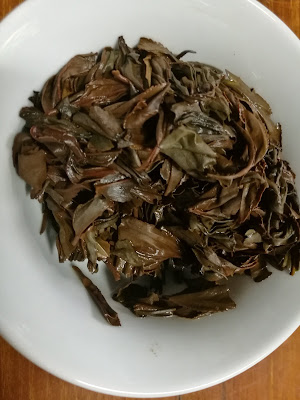 Lots of infusions in (it just never stopped, not even transitioning much in lots of later rounds) it occurred to me what the distinctive, familiar taste was, which I hadn't really been placing:  butterscotch.  I'd mentioned the tea was sweet, a bit like malt or toffee, sort of like fruit or floral aspect range, probably closest to peach but not exactly that, and very creamy.  It was butterscotch.  I'd have to try another round of infusions to see if it was almost exactly like butterscotch the whole time or more fruit-oriented range that had transitioned to very close to just that later on.  That's my guess, based on memory, that it leaned towards fruit more earlier, and then shifted to quite close to butterscotch.

To me this is how flavors interpretation tends to work out.  I think butterscotch probably is the best single description of this tea, but describing it as peach, citrus, and cream isn't necessarily getting it wrong.  Those are all just different interpretations of parts of the flavor range, and the balance of different tastes probably did change over the whole cycle of infusions.  I was talking to Cindy about the flavors and she thought the fruit was mostly peach or maybe also included strawberry; more of the same about different interpretations being possible.


Per my preferences and judgment it would be an understatement to only say that this is a good black tea.  I see it as on par with any really good black tea I've ever tried, distinctive and unique, complex and balanced, a refined, high quality well-made tea.  I really love the way some sets of Dian Hong aspects work out too, maybe even slightly more than this aspects range, but I really like this one.

Teas like this are why I feel confident in telling people every single tea they will ever find in a grocery store isn't very good, relatively speaking.  Of course there is a whole level of above average teas between commercial versions and this one, but teas like it solidify that conclusion.  It's hard to express that sort of thing and not come across as a tea snob, but then only someone with a bit of similar exposure would make any sense of that claim anyway.

To help place that, I drank a lower-medium quality level Chinese Tie Kuan Yin with lunch today (something I bought as loose tea on impulse in a Chinese restaurant), and an inexpensive Earl Grey with lunch yesterday (I bought that one in Russia to give to the staff here).  I'm not averse to much lower quality forms of tea.  Both probably represent the high end a grocery store might conceivably carry.  But if the idea is discussing better tea those aren't that, and this Lapsang Souchong is.