Meeting Huyen Dinh in the Bangkok Chinatown, and a Longjing review

I finally met Huyen Dinh, that one Vietnamese tea friend I did a tea swap with last year.  She's as cool as she comes across in the pictures and messages, very bright in spirit, enthusiastic about exploring lots of kinds of teas.  Her family does gift packaging (kind of a Chinese theme that carries over in Vietnam more than here), so she's building on a lot of prior exposure to a broad range of Vietnamese teas.  She passed on a few more Vietnamese tea versions so I'll say more about that part in another post.


We visited Jip Eu, my favorite Chinatown shop.  As usual the owner, Kittichai, was very kind about visiting with us and sharing tea, and talking about teas from Thailand and China.  He has family in the Wuyishan and Anxi areas in Fujian; I've seen a picture of him processing tea in a small family operation within the park boundary in Wuyishan before there was even a park there.  Jip Eu has been around for 90 years or so, so that's his main background, buying and selling tea his whole life.  His wife wasn't there; kind of a shame since she's nice to visit with too.


Short visits like that tend to feel a bit rushed but it is nice visiting a shop where sitting down and trying teas for an hour is fine.  As with that shop I mentioned near the flower market, Ong Yng Choon, a lot of local tea demand seems to relate to drinking blended versions of Shui Xian, basic oolong.  It's definitely more moderate quality tea, in terms of character and cost, but blending can offset some of the rough edges that a modest version of a single-origin tea could express.


I should say more about Huyen since meeting her was the main theme.  She has a bright enthusiasm about tea and genuine nature that really works well together.  And Vietnamese tea is a much, much broader subject than most people would be aware of, a really solid grounding compared to being familiar with teas from almost any other countries.  China has a broader tradition, of course, with a bit more higher end to consider, but it's my impression that Vietnam's tea tradition is as developed as India or Japan's.

Huyen mentioned that people in the far North of Vietnam produce tea identical to pu'er (it's from quite near Yunnan, and the plants would probably be nearly identical to some versions there), but that they aren't familiar with pu'er.  They call it dried tea, since after a light frying step (sha-qing) and rolling the tea is dried in the sun.  I've not been completely clear on what some versions of high mountain ancient tree green teas were and she passed on another sample of one.  It's not pu'er, and it's not snow tea, but also not conventional green tea, nothing like the Thai Nguyen area "fishhook" style.  To look at it I'd think it was loose sheng.  I'll say more about that in that review post.

We talked a little about how her visit went, and Thai culture, and of course about different types of teas, and brewing.  It's odd considering people you only know online as friends, although I do, and also odd basing a real-life friendship on a short visit worth of exposure, but that's where it stands with her now.  I kept saying she should meet my kids, since they're the coolest thing to experience in Bangkok, but that'll have to wait until another time.


I bought some Longjing (Dragonwell) during that visit there.  I've been behind in checking out this Spring's teas this year, which loses something due to not being so into green teas.

Some people would have a more developed take on where this stands in relation to other Longjing than I do.  I tend to buy a fresh version once a year in the spring and that's it, and I can mostly compare year to year if it's pretty good or not, not matching up aspects.  That shop owner discussed different alternatives a little and seemed to present this one as the best version, as much as there is a best versus just preference difference.  I've lost track of his description of this tea but that almost seems as well, to just describe this Longjing version and leave off about style or region claims and other background.

That shop specializes in Wuyi Yancha sales, with Anxi Tie Kuan Yin seeming like an emphasis beyond that, and I've bought some Dan Cong there, so green tea is a little off their normal range.  But they do sell a bit of pu'er, and I did buy a compressed silver needle cake there (that one I gave to a Thai princess).  It's not as if Longjing is unfamiliar to even those large-jar lower-quality shop vendors in the Bangkok Chinatown; it's quite central to the Chinese tea tradition.  I've bought it in other shops where they keep fresh versions separate from all that, typically refrigerated since Bangkok heat isn't great for fresh green tea.

If you bought only 50 or 100 grams and planned to drink straight through it and your room temperature really is a normal room temperature, around 70 F or 25 C (funny how those two don't match; room temperature here is 25 C or about 77 F) then it probably wouldn't matter, storing in a normal cabinet would be fine.  Well sealed, of course.  Opinions vary on that point though; some say that cooler is much better, that as with food freshness good green tea is just much better stored cooler.  Others warn that even minor condensation relating from taking a tea in and out of the refrigerator is worse than the warmer storage effect. 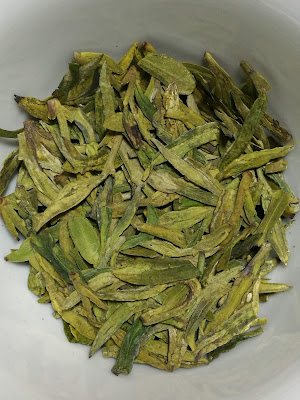 People might interpret the color or size of the leaves in different ways but I'm not really on that page.  To me as long as it looks like Longjing and smells like Longjing the brewed tea effect can decide things from there.  I'll prepare the tea Gongfu style, using shorter infusions versus a Western approach, and of course cooler water, around 70 C.

The initial infusion is light, on the short side, but still very sweet and intense.  The flavors are bright, with that characteristic nuttiness or toasted rice main aspect, supported by fresh tasting vegetal aspect range.  It has a bit of grass to it but that complements that other more pronounced range.  I'm not a fan of most green teas because the grass and vegetables get to be too much, even brewed lightly to emphasize sweetness and offset astringency, but this balance works well for me.


On the next round this is brewed a bit stronger, still nice, still sweet and smooth due to using a low temperature, but a bit more subtle would be optimum.  A bit more green bell pepper comes through, essentially replacing the grassiness, still coupled with the distinctive toasted rice aspect.  I've heard that called either nut or toasted rice, and it can seem like either depending on how you interpret it, or I suppose maybe some people can make a clear distinction when it's more one or the other.


The tea has nice sweetness, and an intensity that doesn't describe at all as an aspect list.  It doesn't have a structured feel in the same way some other tea types do, as they affect a different part of the mouth more than others, but it feels full, and flavor is definitely drawn out long after tasting the tea.  It would be a shame to drink it when in a hurry, as I tend to drink teas with work-day breakfasts.


I notice a lot of the fine hairs on the tea surface (trichomes) that can occur when brewing green or white teas, typically seen as a good sign, that the tea is made from fresh and healthy younger leaves.  Even on the third infusion there is lots of that.


Brewing the tea quite lightly drops the aspects back into a great balance; it was nice last round but even better.  Of course what's going on with that relates to preparing this tea Gongfu style, and I think it would still be fine prepared Western style, that it's not necessarily an example of where that would clearly be a mistake.  Western style seems to not work very well for sheng pu'er and oolongs, in general, at least per my preference.


This tea is about as good as I can evaluate a Longjing to be based on remembering one version a year.  The flavors being in the right range identify that, and the overall intensity, and sweetness, and full feel and aftertaste.  Flavors aspects can shift in different ways and it could be slightly nuttier / more like toasted rice, but it's definitely in the right range for better version.  It's my understanding that would change based on how it was prepared, the frying step, and that different people might prefer different things.  A lot of that effect, a bit more frying, could indicate the processing is compensating for flaws, using that step to draw out complexity, instead of relying on the initial tea character.  Of course in saying that I've moved onto guessing, but it's based in part on the practice of re-frying green teas to wake them back up, to change character later.  This tea is definitely really fresh.


The next round is more of the same, a good thing.  I suppose I wouldn't mind a touch of the green bell pepper and underlying grass swapped out for more toasted rice but this isn't the kind of tea one would normally try and wish they were drinking something else.  Huyen raised a good point in discussion about trying teas, related to reviewing them as much as appreciating them:  trying a tea once or twice doesn't give you a full, developed impression.  People vary across different time frames, and that along with minor brewing variations and just noticing more can shift an impression of a tea.  Reviews here are meant to pass on an impression, but not a final, complete, objective interpretation.


This tea's character is why I like Longjing; that intense, characteristic, fresh taste, and limited grassiness compared to most other green tea styles.  I remember trying a sample a tea friend sent, Peter Jones (of Trident bookstore in Boulder, CO; probably worth checking out), and I knew it was the right tea as soon as I opened the package, not even needing to taste it.  This Jip Eu version may or may not be quite on that level, a true competition grade tea, but towards the higher end of quality level differences become minor, and personal preference for specific characteristics is still as big a factor.


Both are as good as the average tea drinker could appreciate, with subtle variation in the upper quality range becoming not so subtle once someone tunes into a specific tea version's aspect range more.
Posted by John B at 10:35 PM