Kittichai, the Jip Eu shop owner (my favorite shop in Bangkok), passed on samples of this tea to me during a recent visit.  I don't even think they sell this; it was from his visit to a tea competition back in Anxi, which focused on Tie Guan Yin oolong from there.  He has family in both Wuyishan and Anxi, Fujian, so ties back to tea growing and production related to both Wuyi Yancha and the TGY typically lighter rolled style oolongs.

Traditionally those TGY oolongs weren't as light as is relatively universal now, or so the common story goes.  It's still possible to find more traditional slightly more oxidized or more roasted versions (or both; it's great when both inputs can balance well).  I compared two versions in an earlier post, once lightly oxidized and heavily roasted with the other at a medium level for both.  It probably related as much to preference as to one being objectively better (although quality would be an input, along with style), but I liked the medium-oxidation medium-roast version better in that case.

We'll see what this seems to be.  According to Kittichai this version may or may not have been a type / category winner but it definitely placed, passed on to him from a producer participating in that competition.

So I don't think they have more to sell at their shop (Jip Eu), but they do carry a really broad range of teas, including good TGY, so someone looking for that should visit and spend some time tasting with them, to see what they like of what they do carry.  They specialize in Wuyi Yancha instead but I've bought a good moderate priced version of Dan Cong there, and good Longjing (green tea), and lately aged sheng tuochas that I've not got around to reviewing.


It's definitely a bit roasted.  Some roasted versions are charred, cooked long enough that mostly that roast stands out, and of course as a well-above average quality version this strikes more of a balance.  I think it will develop further as the leaves unfurl more but it's nice early on.  It has a characteristic sweet, floral aspect common to a lot of Tie Guan Yin, distinctive of the type, especially versions grown in Anxi, versus those transplanted to other places.  It also comes across as a hint of cooked sweet corn, with a warmer general tone than unroasted version express.  The sweetness really stands out too; it tastes a bit like a light caramel, like a browned sugar.

On the second infusion the tea picks up some depth and the roast really stands out, the related cooked-sugar sweetness.  The balance of the tea works, how the aspects come together.  This may have been oxidized slightly more than the bright green TGY versions but it's the roast that's responsible for most of the transition away from that type of final character, for sure.  It seems to me that's a standard style now, to keep oxidation level relatively low and use the roast to adjust flavor profile, versus oxidizing the tea more and also roasting it.  There is a very faint hint of char but in general it just warms the flavor range profile and converts some floral and light vegetal character more to a cooked sugar range.  Mineral is pronounced as well; that balances the other aspects well.

The next infusion was on the fast side, to see how the tea works out made as a light infusion.  For once this proportion is such that gaiwan isn't filled with leaves, so flash infusions aren't necessary to adjust for that extreme.  The tea works well light but the flavors come across a little thinner; at this proportion infusion times of over 10 seconds work better, with optimum depending on preference. 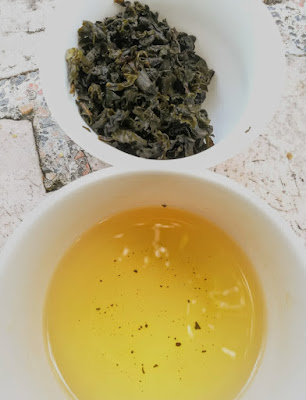 The roast effect draws out flavor complexity that's hard to describe, but I'll give it a go.  Mineral range extends to an inkiness, to tasting a bit as ink smells.  That may or may not be related to roast; just as likely not.  The sweetness and floral aspect probably aren't resulting from roasting either, except in the way the sweetness takes the form of cooked sugar versus a lighter range.  One light vegetal range in the last round reminded me a little of how better grades of marijuana smell.  This might be wrong but for some reason I thought that might be tied to terpenes, the aroma compound set.

Let's check a reference on that (tied to a different product subject mentioned in this text, but the terpenes scope is the same):


What you’re sensing in meals, fruits, flowers, and even cleaning products are terpenes.

These organic compounds that give plants flavour and smell (and the reason you can tell a difference between a coconut and a raspberry) are present in cannabis flowers, too.

So let’s dive into what terpenes really are... Terpenes (pronounced tur-peens), or terpenoids, are aromatic metabolites found in the oils of all plants.

There are more than 20,000 terpenes in existence and at least 100 produced by the Cannabis plant. Terpenoid production evolved over time in plants, including cannabis, to attract pollinators and to act as defense compounds.

So there's that.  According to that reference they not only smell nice in different ways they also have an effect on people:

...terpenes have their own effects apart from their relationship with cannabinoids, including inhibiting serotonin uptake and enhancing norepinephrine activity (acting as antidepressants), increasing dopamine (regulating emotions and pleasure experiences), and augmenting GABA (the “downer” neurotransmitter associated with relaxing effects).


But are these found in tea?  Yes, according to a World of Tea reference (now rebranded as a Specialty Tea Alliance reference):

Linalool is one, a linear terpene, with a list of some other cyclic terpene compounds familiar as tea-related flavors in the following Wikipedia table graphic: 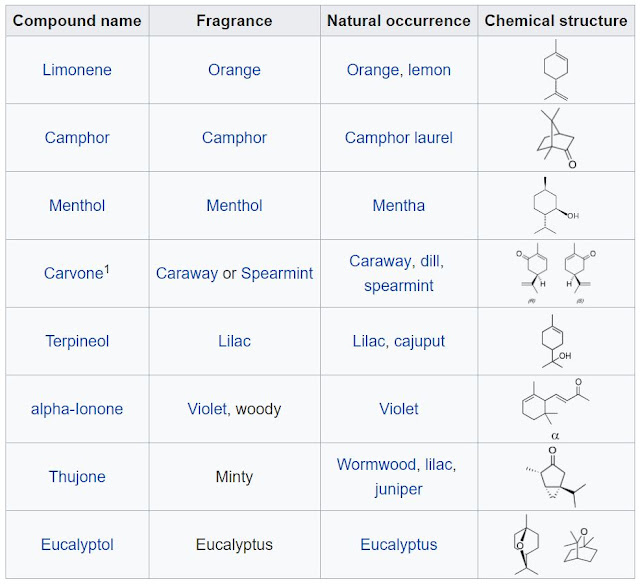 That aromatic compound Wikipedia reference is interesting, the rest of it, to me well worth a look.

The next round isn't so different.  Again it's nice the way the mineral, sweetness, floral, touch of sweet corn, cooked sugar / light caramel, and light vegetal aspect all balance.  There is really no char at all to be noticed; the little that was present faded over the first couple of infusions.  This tea doesn't transition much (change over the rounds) but then at least it was nice the whole time.

A touch of aromatic wood tone joins in at this infusion (4 or 5?), towards cedar or redwood, just not quite that aromatic.  The transition costs the tea a bit in terms of sweetness and floral range but that still works well; it still balances nicely with the rest.

I really liked the tea.  The high quality level is evident.  That balance of slightly more oxidation and some limited roast input in the other version I mentioned in another review worked slightly better, but in this case it was more a style difference than related to this tea not being as good a version.  This style still does work; the roasting draws out a nice complexity, in addition to just changing the initial character.  It retains the brightness and sweetness and adds other levels.  I just like the warmth and different tone of slightly more oxidized oolongs better, and the overall balance such a profile can strike.