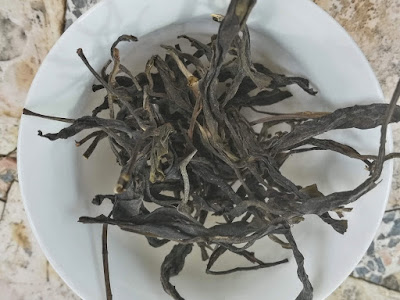 I'm trying the second sheng that Anna passed on, the owner of Kinnari Tea of Laos.  The first pressed version I reviewed not long ago (here).  It was pleasant, unusual for being slightly oxidized.  Or at least seeming so, with her take on that confirming it, already mentioned in a Myanmar Kokang dragonball review draft (which I'll post out of order), so I'll not go further with that idea here.

I didn't have long to try this tea before a swim lesson this morning.  I'm doing most of the editing on the same day; not how that usually goes, but I do have two hours to spend during the lesson, since I'm joining it.  It made for a strange call then to comparison review it, since that would add to the time demand, but I was curious about common ground with the other sheng, and if the difference related to the extra oxidation would stand out.

Anna mentioned the pressed version's background and it seems nearby but not completely local, from near different villages in the Phongsaly province:

That sheng is a forest gushu from autumn 2018, from Ban Nammanoy in Nyot Ou dirstrict, one of the villages we're working with for CCL project where William is involved too [of Farmerleaf]. They just started making cakes - they are likely among the first in Laos to stone-press their own cakes.

Micro-climate, soil type, plant type, and processing could all be nearly identical or completely different whether the tea was from a relatively close area or far away.  One would expect the common causes to correlate to proximity but that wouldn't be necessary at all.  Rainfall patterns can be quite local, or soil coverage and type could vary with terrain features, and so on.  I focus on how teas come across most as a result, de-emphasizing background that really is interesting and relevant, because even in this special case where someone knew the producers and saw the trees there's only so much detail that can be included anyway.

You might think you could look up those places on Google Maps and see how they fit together, the two villages mentioned, but it seems to not work that way:

I can mention lots of other references, if looking up related pictures is of interest.  Why wouldn't it be; remote Laos has a cool look.

Here's a Farmerleaf FB post of being on the related same visit (they also support the NGO development project), with more in Kinnari's FB page if you look around (although maybe none so directly related, more on the other two teas I've not checked out yet), and a page with lots of photos from the CCL NGO involved (William stands out a bit in those; he's the guy that doesn't look Laotian).  This Farmerleaf video is from the village this tea is from, Tungkualin Noy; it's fascinating hearing that local farmer's perspective.

The first round is just a first impression, a little light to go far with descriptions.  It seems interesting.  Floral doesn't stand out as much as it might, or any flavor or other aspects, since the tea is quite subtle still.  Mineral is already showing up, with a bit of vegetal range, and an unusual pleasant spice-like note.

The other version (the tea cake pressed tea that I had already reviewed) is warmer in range already, with a lot of warm mineral and a hint of dryness.  Since it won't do both justice to say a lot related to this round I'll add more in the next.  I've given this first round around 10 seconds time and will go slightly longer on the second to get this moving.


This Nyot Ou version is still on the subtle side; that's interesting.  The thicker feel is there, and aftertaste hangs around, what there is to taste, and it seems like sheng, but it's not strong flavored at all.  Bitterness is very mild, sweetness is also limited, and other range doesn't stand out, to an unusual degree.  The flavor present is pleasant.  It has a root-spice theme going, it seems; that's what I wasn't placing.  Vegetal range is hard to pin down, and people would surely interpret that in different ways.  A light but warm and sweet version of autumn leaf is close enough.  Maybe it's odd that teas don't resemble the scent of dried forest (tree) leaves more often than they do.  Some light mineral supports that.  It all works; it's nice, just unusual for being light across those different aspect ranges.

The other sheng is much different, although there seems to be some common ground that stands out more for trying them together.  It's brewed a little too strong at just over 10 seconds; astringency picks up as a result, with that dryness and mineral coming across closer to how black teas do for character, just a very mild version of that.  Bitterness is much stronger but still light for young sheng.  Sweetness could be more pronounced but the balance isn't bad.  I'm probably missing a couple of flavors, or one other character aspect (I could go on about feel, for example), but time is tight so I'll rush past all that.  I'm off to swimming lessons soon; it's always something with the kids.

I mis-matched these proportions slightly for rushing, going too heavy on the second version.  It's odd it's even possible to get as close to judging tea amounts by eye and feel as seems to be typical in these.  They're not so far off it will make it hard to get a feel for that as an input, and the point wasn't about identical comparison anyway, just to get a feel for similarities and differences. 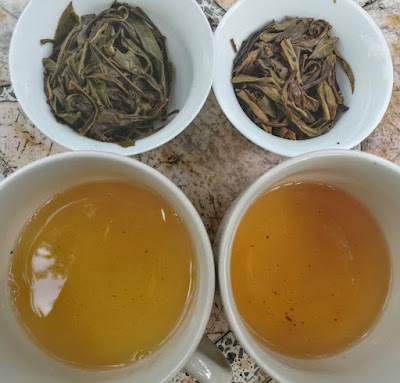 Again, interesting for being subtle.  More wild grown tea versions can be mild, and interesting in flavor range, so a lot of variation across related type versions isn't unusual.  No real change to that list though; if an accurate read root spice is a main component, with a good bit more filling in the rest given how subtle the tea is.  Bitterness probably picked up a little but it's still very light.

A warm version of dried leaf stands out a lot in the second, which has a bit dryer, warm mineral character.  It's quite pleasant tea too, just unusual in character across some different range.  Some background wood character might be common between the two, harder to recognize for these being so different in other ways.  The first tea comes across as slightly sweeter for having the balance it does but it may or may not be.  It could just be an effect related to how the different aspects combine together.

It's almost time to swim; we're at the stage where my wife is shouting.  One more infusion might be it, for now.


I like this tea more than I would have expected for getting so little to experience out of it.  That subtlety works better for all that's there being so pleasant, and slightly novel.  The root spice aspect (or one I'm interpreting as such) is nice, and balances well with the rest.  The feel has a thickness to it, and there is some bitterness and sweetness, just not much.  I think seeming sweeter probably is an effect from other aspects in trying the teas one after the other.  In a way this reminds me of an oolong, the way that a thick feel and pleasant complexity can go together with a tea that's not intense in flavor, although most oolongs are stronger in flavor than this too, just not like young sheng.  It might resemble a typical white tea character as much or more.

More of the same for the other:  interesting warm mineral tone, autumn leaf aspect, some hint towards spice range, a little harder to pin down, maybe an aromatic bark spice.  A slight dryness to the feel is different.  Dropping infusion time to relatively fast pulls that into a good level; it balances with the rest. 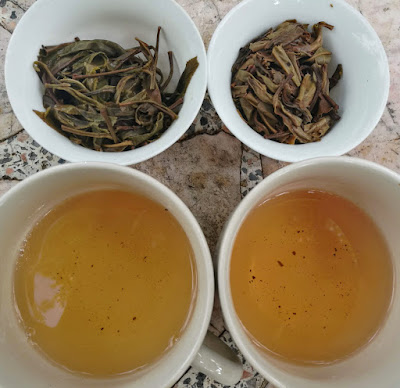 I did squeeze in one more round, not so different though.  Bumping time just a little drew out more intensity out of the Nyot Ou tea, but it wasn't lacking something to experience, and hadn't seemed out of balance.  That root spice aspect leans a little towards a dried fruit, maybe along the line of dried longan.  It's hard to separate if that's from going slightly longer or a natural transition across rounds, but at a guess it's the second.  The second version transitioned aspects and balance a little, which I'll leave off deconstructing, since I'm out of time.


Rushing the tasting didn't do that justice, especially given that main version I wanted to try is one of the more subtle sheng versions I've experienced.  I liked that though; it helped that the aspects pleasant were positive, well balanced, and that thickness of feel filled in some of the experience.  The freshness of young sheng still seemed to come across, a bit odd given that it was conveyed by a tea with a very light flavor.

I'm often considering aging prospects in teas, sort of the page I'm on for learning now, and this is harder to place than most.  Often it seems flavor intensity, bitterness, and astringency represent character that could transition positively over time, probably shifting a good bit in character over just one year in a warm and humid enough storage environment.  Or conversely, being preserved in original form in a cool and dry enough storage environment, it seems.  This doesn't have much for flavor to "swap out," and minimal bitterness, with astringency limited to a moderately thick feel, which is related to what people often mean by astringency but kind of different.

I would guess that in a year or two it would still be subtle, and it's hard to imagine that flavor intensity or any of the rest could increase so much.  I'm not sure it would fade quickly though.  Brewing this stronger, going with a higher infusion strength than is typical, would ramp up aspects across the whole range, and there is no bitterness or other aspect limiting using such an approach.  It would be natural to try that, to go with 20 second infusions instead and see how it goes.  With feel (thickness) in a light but normal range brewed more conventionally that would really ramp up if doubling infusion strength, and those subtle flavors would have to strengthen.  Often bitterness, feel, or specific flavor aspects aren't positive in simply doubling timing, but in this case it would probably taste slightly more like it already did.

I did try brewing it longer in later rounds after returning home (from swimming).  Maybe it did concentrate the fruit flavor a little, but it had already started to pick up a slight woody flavor common in later rounds across sheng types.  It was still nice for a few more infusions.