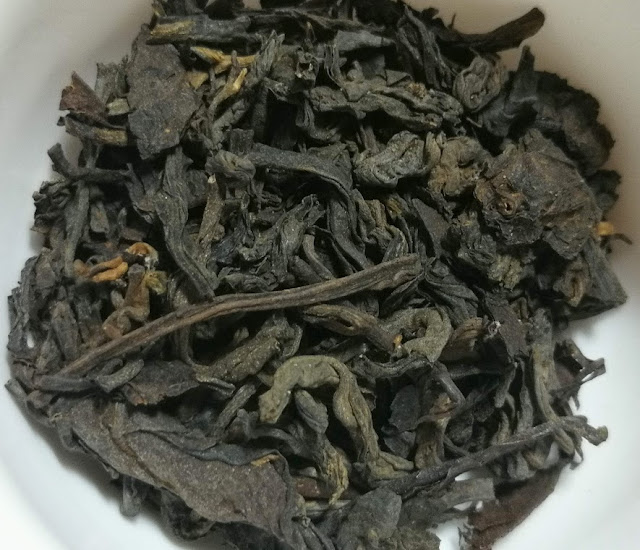 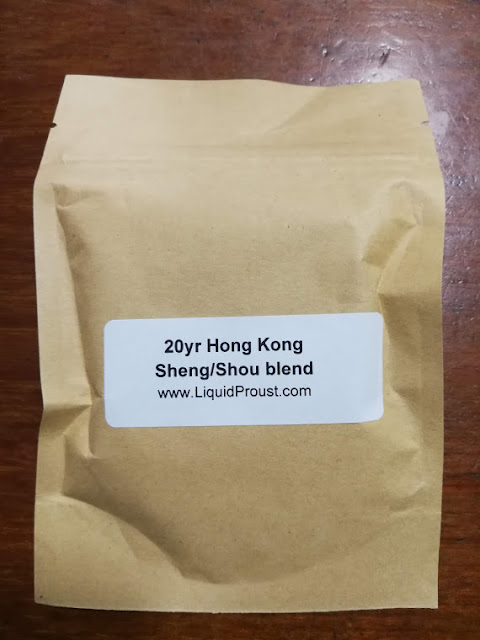 I'm reviewing the fourth sample from a Liquid Proust tasting set (with this the third), just one more to go.  Andrew's description:
...and the non-pictured emotional tea... each person will receive roughly 20g of a 20+ year blend of sheng and shou from Hong Kong. My first time going to Dimsum was just in the last few years when a local Ohioan tea friend came over and took me out. I decided to bring this tea with me and because of the great experience connected to the tea and the depth that it offer, this will always be one of my top teas in my life. I bought it up and I've decided that I will be putting it all into this group buy so everyone else can enjoy it. This is hard to do because I have a strong connection to this tea, but part of my mission is to do exactly what I am doing here.
That's fairly representative of what he's trying to do, and how he approaches it.  It's about sharing tea, making these sets.  It links to his own personal journey, which is how tea experience always works, you experience within the context of your own life and perspective.  I can relate to someone focusing on their own path, and wanting to share that experience.
For hearing more about his journey and random teas his Instagram posts work.
I've heard of offerings related to mixing sheng and shu, but I've never tried one.  This should be interesting.  This kind of mix would seemingly only make sense in an aged version, and then varying starting points and storage conditions would probably throw off the results being remotely similar in different cases.
It's not a new theme at all, and never really has been common, but apparently it's been around as something people or large producers experiment with.  A Yunnan Sourcing product description adds more on that background, and provides a lead to follow for further reading:
2016 Yunnan Sourcing "Green Mark" Ripe Raw Pu-erh Tea Cake
With this lovely cake we celebrate an age-old tradition of mixing raw and ripe pu-erh tea together to create a harmonious blend worthy of aging.  Like the famous "Purple Heaven" bricks and cakes from the 80's and 90's, we have blended ripe and raw Pu-erh tea together.  The raw and ripe pu-erh both came from the same area as the tea leaves used in our 2016 Spring Mengku Huang Shan cake.  The ripe pu-erh is fermented from Huang Shan 2015 spring tea leaves, but both are from the same organic garden!
The addition of raw pu-erh tea to this predominately ripe pu-erh tea cake results in a lovely experience.  It's not so different from ripe pu-erh tea, but there is a an additional layer of texture that enhances the overall taste/complexity of the tea but never detracting from it.  I tirelessly blended teas together and experimented with ratios to find the best possible outcome...  Recommended for longer-term aging! 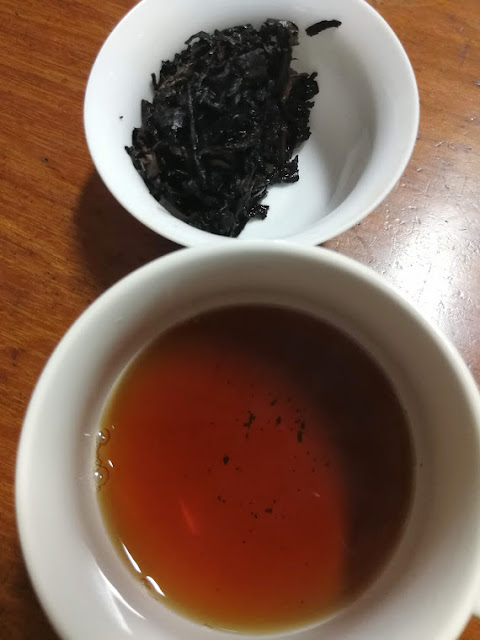 First infusion:  definitely a bit earthy; this tastes like Liu Bao.  That's not necessarily a bad thing, and the slate / warm mineral / moderately dry basement range will "burn off" after an infusion or two, to some degree.  That's a little odd, because shu should fade to being mellow, not go towards this range.  It's definitely not unheard of for sheng to age to something like this, to include some early round storage related flavor that settles back out, but it's typically not exactly like Liu Bao, more just along that line.
This flavor range might even lean a little towards char, as Liu Bao can.  Really old sheng can taste a bit like carbon but not usually exactly like char, even though the two are close.  The difference is that this is towards being smoky, it's just not smoky, and that over-aged sheng experience is character-neutral, beyond tasting like a clean form of charcoal.
A Malaysian friend described that one Liu Bao aspect as being like Chinese barbecued pork (nothing like Texas or Carolina barbecue; no tomato or vinegar based sauce is involved).  If that dish isn't familiar then it's not helpful.  As chance has it I had that for lunch yesterday; I should've taken a picture. 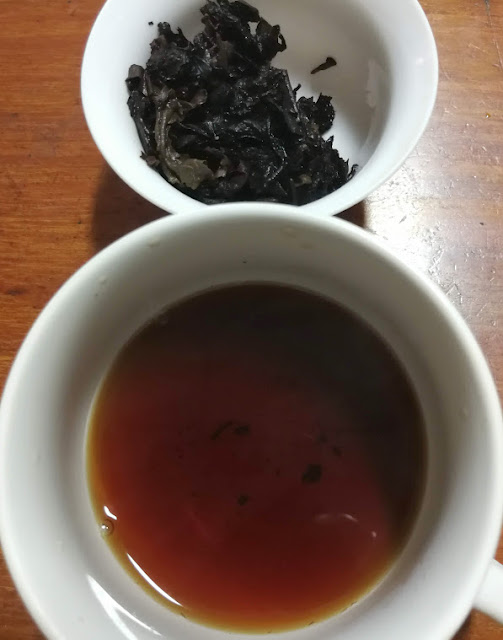 Second infusion:  I gave this the better part of a 10 second infusion, a very long time for tea this intense in flavor.  It should help the third infusion get where it's going, but this will probably be a bit much.
It's softening in character already, moving closer to a standard shu, but with a bit of an edge.  It's still strange how close this is to Liu Bao.  It has a mellow depth that would be unusual in those, or at least present in a slightly different form in an older version.  Tasting it this round I'd still peg this as a relatively aged Liu Bao, maybe stored around 20 years old in conditions with substantial humidity, probably what this went through, just related to two different types of tea.  I don't notice anything clearly relating to a dual nature going on; it integrates.  It has a higher end warm mineral range and then deeper, earthier tones, but it all makes perfect sense together.
I talked to Andrew about impressions and he really didn't get the overlap with Liu Bao character.  It was fading in this round, and essentially cleared off by the next, on to an aspect range closer to aged sheng.
Third infusion:  the last description still works.  It's probably slightly cleaner, with a bit less earthiness / slate / basement range, more like an aged sheng than an actual Liu Bao at this point.  It's hard to place in relation to either sheng or shu; as I interpret this closer to an aged sheng, but the mix of inputs is different.
I can see the two types of leaves in the appearance; that part is interesting. 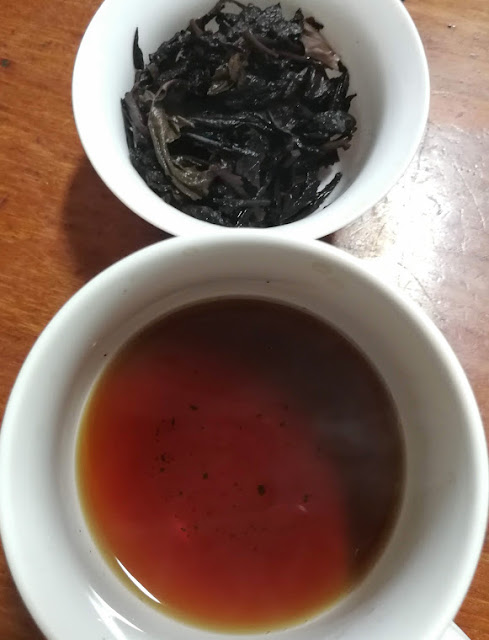 Fourth infusion:    it's integrating even better, starting to work even more.  That apparent storage related flavor aspect has largely faded, related to the level in the early rounds, now transitioned to a warm mineral layer versus a dominant aspect range.  The flavor moves to more of a warm, dark wood range, what I'd imagine betel nut tastes like, but I never get around to trying that.  It's a little towards roasted chestnut, with a sweetness hinting towards dried fruit as well, jujube.  It's not bad.
I'll bump infusion time just a little since there is nothing challenging about this, from a bit under 10 seconds to just over. 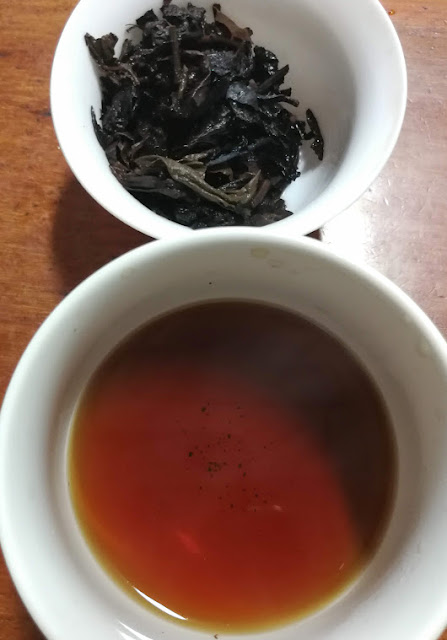 Fifth infusion:  not far off where it was last time.  It's odd that layered, subtle aspects working together give this decent balance, not really what I would've expected, even after the first two or three rounds.  I'm running these infusions a little longer than I often do, related to backing off the proportion just a little, and this not being challenging in any way.  There is no need to optimize results in relation to offsetting any problematic range, but I don't think I've got it just right related to experiencing the most out of it.
This is good; better than my description is making it sound.  The novelty has me doing more with trying to figure it out than just appreciating it.
How it will fade will be the story from here on out, if there is an interesting twist or two related to transitions, or how that later balance works out.  I'd expect this to start fading a little over the next couple of rounds, and not making it far past 10, if any.  I'm off to a swim class quite soon so I won't tell that story, probably not even in later notes (the whole day on Sundays tends to get busy).  I'll do one more round and leave off at that.
It's worth noting that it probably would've made more sense to stretch these first 5 infusions out to 7, to drink this in a much less intense form.  It would balance better.  I'm rushing this for needing to go somewhere, part of the trade-off of continuing to write a tea blog while maintaining the extreme demands of parenting.  It's not meditative.  Being mentally still in the midst of chaos could work as mindfulness practice, but usually I just block it out until it's my turn to shout.
Sixth infusion:  thinning just a little, otherwise not so different.  To me this works as a quite passable aged sheng version; the shu just gave it some extreme depth early on.  Or I suppose maybe the aged sheng needed that transition time to clean up; that would make more sense.  Either way this needed 2 or 3 rounds to move past tasting like Liu Bao, which I really didn't see as a flaw, just unusual, and now it's not so far off aged sheng.  It's odd that it makes as much sense as it does, that it all integrates this well.  Exhibiting a clean, balanced betel nut range has been quite pleasant.
"Aged sheng" means a lot of different things; that goes without saying.  It seems best to not really try to place it here.
Seventh infusion:  same as last round; I'll let this drop.  Mouthfeel has dropped out, and intensity, both of which I probably never really did much with describing for rushing this.  It didn't come across as the best example of aged sheng but for being decent, even well above average in character, depth, balance and quality level, the blend was quite successful.
This "average" I speak of relates to me trying different samples and old CNNP cakes.  For some that would all be well below average, maybe even relatively undrinkable.  It's funny how preference and acclimation to types and quality levels works out.
The second sample from this set I tried was an 2003 version of Dayi 7542 sheng; I guess that works as well as any tea for a baseline.  I liked this more.  Given how personal preference and storage as an input work out I'm definitely not saying that this is objectively better than a 17 year old version of 7542; the claim here is that to the extent I remember that tea--which I just tried a month ago--I prefer this.  It's more novel and interesting, easily tipping the balance, but maybe just related to aspects being positive taken alone I still do.  That "betel nut" effect is cool, and this ended up being clean, complex, and well-balanced. 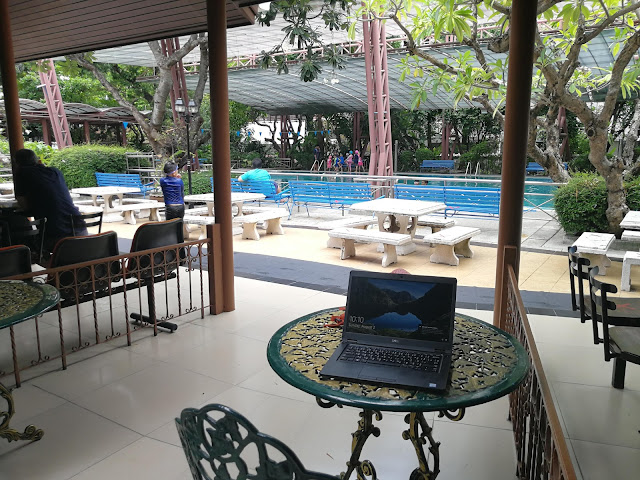 a good place to do some writing