Two more interesting teas from Gopaldhara.  The last teas I reviewed from them were really novel, two Indian oolong versions, among the best Darjeeling teas I have yet to try.  The Summer Beauty Muscatel and China Muscatel were also really exceptional.  Two others before that were closer to standard styles for Darjeeling, but again quite nice.

One of these is a little unusual in background, an early season tea made from the old leaves of winter growth, trimmed to clear the plants for new growth for the true first flush harvest.  It wouldn't be listed on the Gopaldhara website, more something different to try.

The Emperor's Choice was unusual for there being two samples of it included in that set (provided for review).  A second sample--that I didn't try yet--was listed as "rare," with their descriptions saying more about that:

Emperor’s Choice is a unique Darjeeling finest First Flush Tea from Gopaldhara Tea Estates, located in Mirik, is one of the highest elevated tea garden in this region & stretches up to 7,000 feet...

This Darjeeling finest First Flush Tea has a bright, rich, sweet, balanced cup layered with honey sweetness, in the floral range & is balanced by a complex flavor structure.The tastes is very clean & refined, simple in a way, but complex in a different sense. There is no astringency in the tea, and the flavor comes across as full with many notes.

The top elevation of Gopaldhara Tea Estates which stretches from 5500 to 7000 FT is planted with the best quality clone AV2. Also the bushes are fresh as they have just come out of hibernation from the prolonged winter of almost 4 months from December to March. During the first flush which also known as spring flush we have 100% growing shoots and get excellent buds with either single leaf or two leaves and a bud. The flavor is prominent as the weather is also very dry and cool which ensures very slow growth.

...The garden workers are very careful in their plucking by hand to make sure only the best shoots with prominent buds are plucked. Darjeeling First Flush Teas are known to be slightly oxidized. This tea is also made in the same way but it is sufficiently oxidized to ensure that all the exquisite flavors are prominently present.

I don't really get far with the theme in this review but that last part was a little unusual, placing this tea, because it's not as lightly oxidized as first flush tends to be, or as fully oxidized as second flush often are.  It doesn't include the heavier flavors of a typical second flush, but the character is different than a typical first flush for it being just a little more oxidized.  Not much more, as you can see from leaf and brewed tea colors, and flavor description.

A sample set description covers what the other "rare" sample is, that I didn't try yet:

So from Rohini instead, a related estate, and white tea instead, so probably a bit lighter and fruitier.

In discussing this other "winter" version with the head of the plantation the character isn't typical of either first or second flush Darjeeling, because of the material type difference.  I didn't know that prior to tasting, and these tasting notes covered both without any background review first.  And they were a little rushed, because I was off to a swim class with my daughter 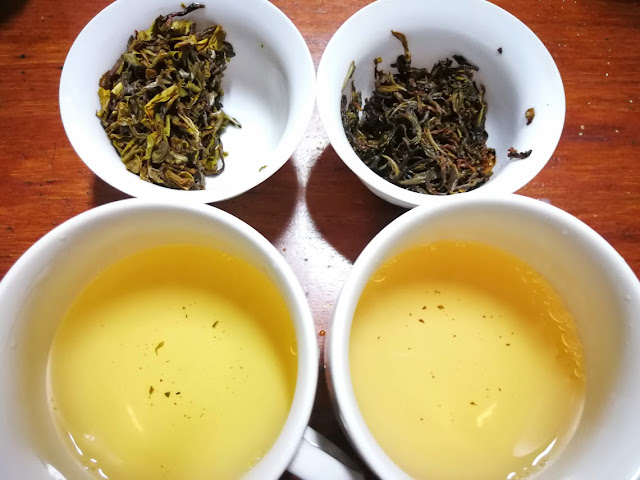 winter harvest:  bright and sweet.  This has an unusual combination of floral and vegetal tones going on.  It's pleasant, just not what I would've expected.  Straight-floral and high level of citrus have been standard in a lot of the other versions, but the vegetal range carries a lot of this experience.  It's like how a dandelion smells, the vegetal part, that edge.

That's towards a spice too, something like fennel seed.  With the rest being light and floral, and it all being clean, it works better than that description would indicate, but then I feel like I have been spoiled by the blasts of sweet floral and citrus tones in their other teas.  I might stop short of saying this isn't as good, but it doesn't match my preference as well, at this stage.  The fennel seed part is interesting; mineral towards actual salt is probably pulling my impression in that direction, along with other flavor range.  It will be interesting to see how it changes.

Emperor's Choice:  warmer; in a completely different range.  A good bit of honey flavor comes across in this; it's rare for that to stand forward as a main flavor as it does in this.  Rich, complex floral tones fill in the rest.  From the look I thought this would be the normal story about one tea being more oxidized than the other, and warmer in tone, covering deeper flavor range, etc., and some of that story line plays out, but it's not just that.  This is pretty light in tone too.

Interpreting this as fruit and floral range would work, along the lines of very ripe pear.  I say "very ripe" because the light, bright-flavored Asian pears are something else; this is the deeper, richer flavor that only ripe versions of Bosch pears bring across.  And floral, and warmer supporting tones. 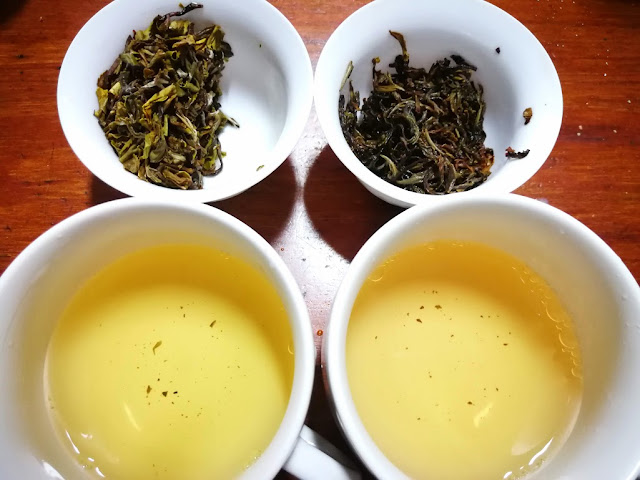 winter harvest:  very interesting.  This gains depth and complexity but across a similar flavor scope.  A bit of lemon fills in at the higher end; that works well. The fennel seed / trace of salt eases up, and vegetal range gives way to the floral scope.  It's better.

There's a lot going on.  Floral range is probably the strongest, but that vegetal-into-spice range is on par with that.  Feel gains depth; there's a richness and smoothness to this.  A bit more sweetness might shift impression a lot, making it seem a lot more floral.  That being moderate (for their teas; still high in relation to some others) makes the other range stand out more.  An unusual form of mineral depth rounds all that out, making for a very complex experience.

Emperor's Choice:  also really interesting, also quite complex.  This also includes a lot of mineral depth that rounds out a lot of the rest.  It's hard to place this floral tone, and the other supporting range, although it does taste distinctively like Darjeeling to me.  I've not been saying terms like citrus and muscatel, and to some extent that applies, but not in relation to their other versions blasting out that range.  This seems closer to the grape input than the grape-wine input I take to represent muscatel (wine made from a muscat grape).

It works well, the overall balance.  I'm not sure it's quite on the level of what else I've tried in earlier samples, but those had set a bar really high, being among some of the more positive Darjeeling versions I've ever tried.  These are both quite good, and only suffer in that particular comparison.  [This last statement seems more like a quality level assessment than it was probably intended; more at the end covers how a style issue changed interpretation of this tea experience.]

winter harvest:  maybe filling in just a little more.  It's interesting the way that fennel seed spice aspect combines with the rest, the floral tone.  This doesn't remind me of any other tea I've ever tried.  It wouldn't be for everyone but to me this balance works.  It's clean and well balanced, with decent sweetness, just not a lot of it compared to the others I've tried from them.  The feel is positive.

I can't count that fennel spice aspect as a flaw, but it is unusual, and how someone takes it would depend on preference.  Other floral tone fills in beyond that, harder to split out, with a nice mineral base adding depth.

Emperor's Choice:  there's a nice warmth to this.  That could be interpreted as coming from warm floral tone range, like sunflower, but warmer.  Or from a warm mineral input.  Extended in the same direction by a lot it might tie to a dry feel, but it just doesn't in this.  The balance is really nice in this tea.  Including just a bit more sweetness than the other really shifts the overall effect.  The flavors are just completely different though, so it doesn't work well to compare the two.

It's a little early for conclusions, based on writing this as notes before trying more rounds later.  These are still transitioning in interesting ways, and to some extent still improving.  I'll probably drink a couple of rounds and get back to write final notes, but I'm off to swimming class so I'll do the main editing while here, filling in the vendor description, smoothing out errors in the notes.

The main take-away, for me, is that the other versions of Gopaldhara teas I've tried recently were so exceptional that it just wasn't going to work to keep liking versions more and more.  These are good examples of Darjeeling, very positive and distinctive, and pleasant to experience.  To me they're not quite as much so as the last two rounds of other teas that I reviewed.  Then again to some extent different is better, and it doesn't really work to just expect more sweetness, more mellow character and fullness of feel, more citrus and muscatel.

To experience that a few times is novel and very positive, the dialed-up range of most pleasant Darjeeling aspects, but variety is what makes teas interesting, and pleasant to drink and explore every single day.

[Later]:  I tried both again for a number of additional rounds, and the first version fared less well through those for astringency picking up with extending the infusion times.  The leaves being a bit more broken would tend to lead to that.  It wasn't anything like the "this needs milk added" level; I mean in relation to teas I tend to drink.  Feel thickness was fine though, countering some of that for filling in depth of experience.  The Emporer's Choice stayed quite positive, maybe not really transitioning in any way, beyond fading later.

I never really did get around to sorting out the second version related to first or second flush character.  The oxidation level threw off a cue I tend to expect, with first flush being very low and second relatively complete.  It worked for where it was, in the middle, with "warmth" placed between the two.

I suppose someone could potentially like that better, or feel that it didn't match up well with one or the other sets of expectations.  It might have seemed slightly more subdued, as it turned out, since typical first flush range character includes bright, light intensity, and second includes heavier fruit and deeper sweetness, with this splitting the difference, to some extent, and not necessarily achieving either.  I liked it, but maybe not as much as the last four offerings I've reviewed.

The other tea demanded a more complete reset for expectations; it wasn't exactly in the broader range for typical Darjeeling character.  I liked it too, but it will be nice to get back to trying other samples more on full blast for sweetness, intensity, and fruit character. 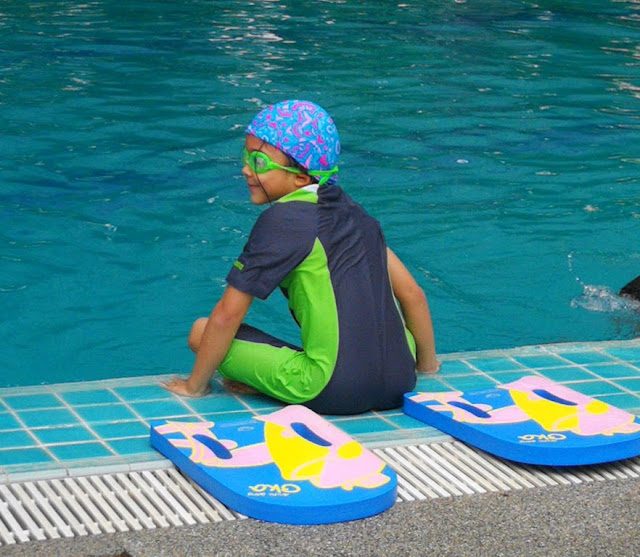