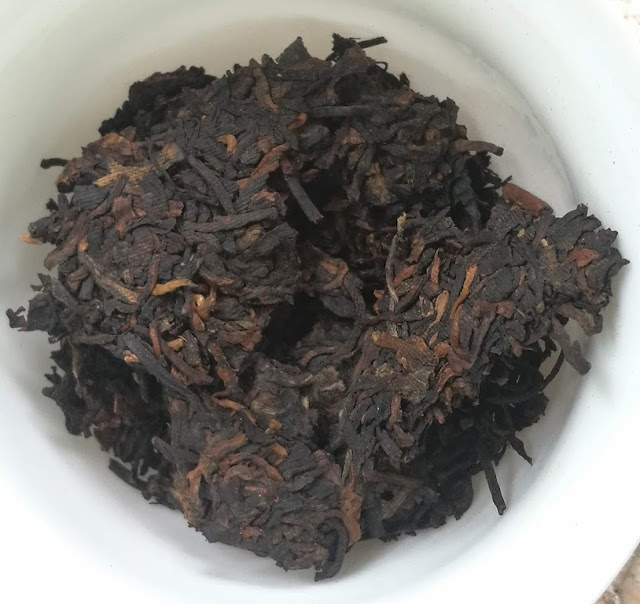 I’m reviewing another tea from Moychay, from a large set that they sent for review.  This is a shu, from Menghai; familiar ground, but not a tea type I drink so often.  At first I thought this might be a Myanmar version, and I considered trying it along with another from there, from Kokang, but since it’s a Menghai (Yunnan) tea it'll be nice to do a single tea tasting.

Here is their description:

357-gram cake of medium density consists of pressed brown and reddish tips. The aroma is restrained, woody with nutty hints. The infusion is dark, reddish-chestnut.

The bouquet of the ready-made tea is mature, nutty, with hints of herbs, exotic resins, autumn leaves and dried fruits. The aroma is rich and warm, nutty. The taste is full-bodied, velvety and sweet, with nuances of spices and sourness of dry berries.

Since I only ever add those descriptions during editing I already know how that compares to my impression, but it'll be clear enough in the review part.

At first I read that last sentence and wondered why they would recommend brewing it in a gaiwan made of porous clay, since those do come up but tend to be uncommon, but that was probably intended to refer to the teapot.  I brewed it using a porcelain gaiwan, which is ideal for tasting, and about as good an approach for keeping tea simple and getting good results as any.

If people like to experience teaware for aesthetic purposes, or choose to explore how clay pots might improve their results, then there's lots of range related to that out there.  Moychay has been producing their own lately; I mentioned them sending a few pieces last time.  I get why that could add an interesting and pleasant extra dimension to tea experience, and I'm also quite clear on why avoiding that could make perfect sense.  It seems like a budget issue tips the balance; if someone has extra funds to keep going past tea expenses why not explore that range, and if it seems like a lot to just cover a lot of the tea part then why go there.  Next you might be buying special natural-fiber earth-tone clothes to drink tea in, and who knows what after that. 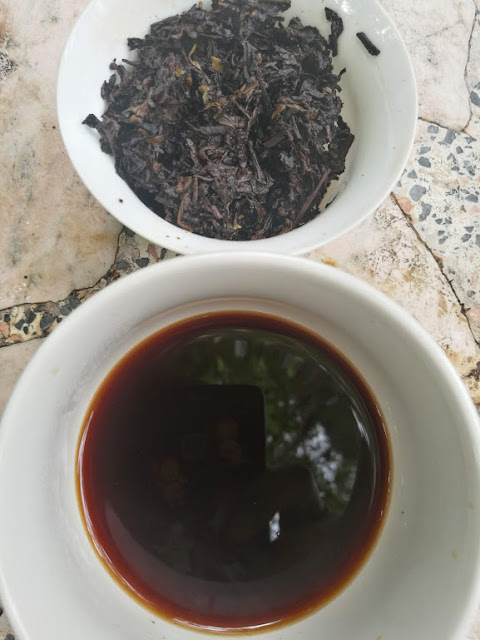 First infusion:  a good bit of dark rye bread / pumpernickel effect; I like it.  For people not so into dark bread this might not be as good.  That flavor is clean in the same sense that pumpernickel bread is, sweet, towards a rich grain, not musty or heavy on mineral or petroleum or the like.  One part could remind someone of a dried fruit, but it would have to be a really “dark” version of a dried fruit, definitely not dried mango and the like.  I always imagine that the betel nut flavor people talk about is a lot like this, but never get around to tasting it.

I went a little heavy on proportion (the usual for me), and the infusion time, at 20 seconds or so, and it really doesn’t need that long.  It pushes the earthy flavor out towards roasted coffee; strong.  Now that I think of it this tastes about as much like an upper-medium level roasted coffee as any tea ever does.  It just doesn’t have that coffee edge, the additional bitterness, and sharper feel, some astringency.  I’ll go lighter on the next round to see what that changes.

Second infusion:   I brewed this for about 5 seconds but it’s far from light, based on appearance alone.  Maxing out the proportion means that this just won’t be brewing lightly.  It’s good that I like shu on the strong side.

Again towards dark bread, although an interpretation of this being like a mild form of coffee would make sense to me.  Even brewed light the mineral seems to play a slightly stronger role, adding a touch of char, matching up with that roasted coffee range.  I guess this is a lot like having a piece of strong black bread with coffee for breakfast then.  I’d definitely eat that, probably for weeks straight before getting tired of it.  I’d probably add a good bit of butter to the bread, shifting it off this flavor profile a little.  I don't put in the legwork that's required to eat interesting types of bread in an Asian country, so the last time I had decent dark bread was on a visit to Russia, 2 1/2 years ago now, in Murmansk of all places.

I get a vague sense of some fruit but it doesn’t really come across as significant, compared to the other flavor levels.  It’s like a hint of blackberry jam.  I really could be imagining that part, but there does seem to be more depth there.  The char I’ve described could easily be described as peat or even a hint of tar instead.  It’s earthy.  I would imagine most shu drinkers would like this, but someone into the much milder, lighter range in shu might not.  It’s not edgy in the sense that some lower quality shu can taste like a cement block smells (or Liu Bao, shu’s cousin), but it’s not exactly smooth and light either, compared to the most subtle examples of the range, which aren't really my favorite.  The way that tippy shu (gong ting) versions have a main cocoa effect comes across in this, but it’s integrated with the rest.

It’s interesting how I’ve just described quite a flavor list--black bread, coffee, warm mineral, trace of berry preserve, peat, pronounced cocoa--but the tea comes across as simple in character.  All of those are close to each other (except the berry); the end effect integrates to a profile that doesn’t span as much range as I’m making it sound.

I just met a Russian guy here, Alex Panganovich, who would probably like this; he’s into shu, and checking out different teas.  I feel way too lazy to get out today though, for keeping really busy for a few weekends in a row.  I might brew a couple more rounds and drop making review notes on account of that.

Third infusion:  this really looks tar-like; I wasn’t rushing the infusion enough and the time crept closer to 10 seconds.  This tea would work just as well brewed at two thirds this proportion, probably, so that the times could draw out a bit longer.  I really like sheng pushed for infusion proportion then brewed fast but shu varies less related to how you make it.  This would be fine brewed Western style, or grandpa style, or thermos brewed, as long as you back off the proportion enough for each.

The same balance repeats, just shifted in order of proportion of flavor aspects.  It moves towards spice range some though, a heavy, woody, bark spice.  Or just fermented tree bark; that could be it.  Or wet forest floor, people might describe the same range as.  I could easily imagine people loving or hating this tea, depending on preference.  It would be odd for someone more on the oolong page to also love this, since it’s the opposite of lighter, refined, fruity or liqueur-like profile, but for a hei cha drinker this should seem great.  Or if someone loves the rough edges of a low cost, well roasted Da Hong Pao that’s not so far off.  I’ve drank so many tea types over so long that I can appreciate most of it, just green range less than the rest.  I do like slightly rough Da Hong Pao, tea versions that are probably a mix of whatever oolongs had came through the shop recently, blended to balance as well as possible for being less refined teas. 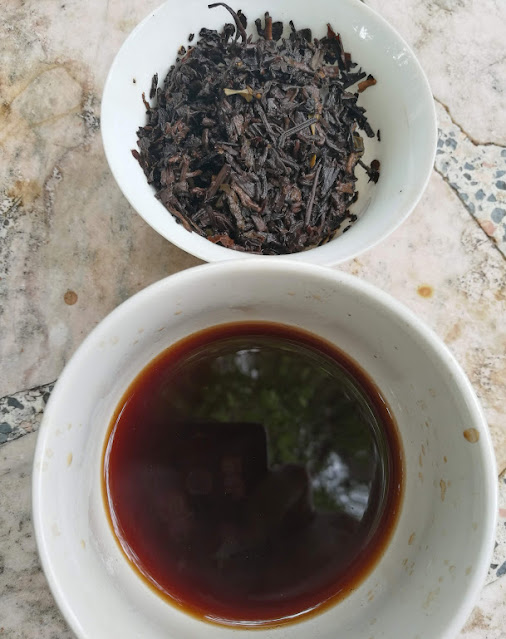 Fourth infusion:  I finally brewed this fast enough to be average infusion strength.  It loses something made that way; it seems thin.  I think this tea could be most appealing brewed on the strong side, to provide that earthy blast, within a narrow but complex range of flavor.  It still works like this but the flavor profile seems much thinner.

Feel isn’t bad; it has some thickness to it.  That’s all relative; it’s just a bit of creaminess, not really a full feel as shu can potentially possess.  Aftertaste range is limited, not even that pronounced when drinking it stronger.  I kind of am of the “shu is shu” perspective anyway, that someone would be drinking it because it’s simpler, more approachable, and has that heavy earth range punch.

Fifth infusion:  this will be enough of the story for me, even though the infusions related to stretching the tea a bit are yet to go, probably a good number of them.

This tastes more like grain now, off the pumpernickel range, onto a more malted grain range.  To me it’s still pleasant, just losing some of the intensity, and flavor complexity.

A nice, basic, earthy shu; how those should be.  I think having more rough edges might indicate this has more aging potential; as this stands it should just smooth out a bit from here on.  To me there are no negative aspects to fade, no fermentation range that needs to drop out, so it’s fine to drink like this.  I drank another five infusions during editing, or in between, and it's just thinning a bit, holding up ok.

I don’t always mention price but there’s a story to be told related to that; this is listed for $17.15.  To me it’s a great value for that price; anyone who like shu who is already buying teas from Moychay would be crazy to not add this to their cart.  It would be even crazier to buy a smaller amount of it than a full cake.  A few teas like this would more than justify placing an order, never mind whether something more unusual or refined turned up or not.

One nice part about Moychay’s selection is that pricing usually reflects quality level, so that you can tell what you are getting from that indicator.  As teas push upwards towards 50 cents to $1 a gram they really are that much better.  Not so much a clear indicator in this case; this would be a good tea selling for twice that, and it’s probably comparable to what a lot of vendors are selling for slightly more than that.  Based on trying a number of their teas I could probably make a list of some of the absolute steals in their listings, for teas that punch way above their weight.  I won't though; I'll just mention one.  Along this character line a compressed Da Hong Pao bar worked as another good example; that was way better than it should’ve been for moderate pricing.

I get it why not everyone is searching for exceptions like this, why people with a looser tea budget are seeking out the higher end range, at fair market values or even relatively higher cost, paying whatever they have to pay for getting unusual versions.  Even for someone in that position I’d think having “basics” like this tea around for when you feel like one would still make sense.

The idea of very high quality shu tends to make less sense to me, although a German tea friend I've mentioned many times, Ralph, has passed on that a Myanmar version from Moychay struck him that way, as unusually good.  I just tried a Myanmar "wild gushu" sheng pu'er version that Alex passed on, which I'll probably get around to reviewing.  I think the plant types there that are on the bitter side probably provide a good leaf compound base for fermenting into a really intense and pleasant shu.  Or that's a guess for why some versions have stood out, at least.

Today the power went out, making for a good reason to do a tasting session outside.  It's the Thai rainy season but the weather held up for that long, to taste tea in the usual spot. 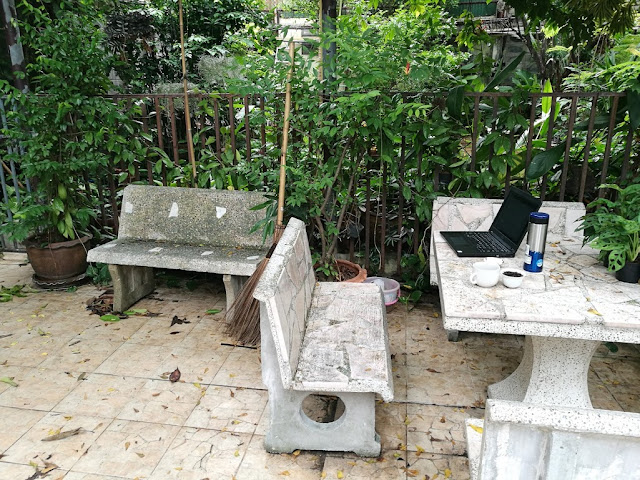