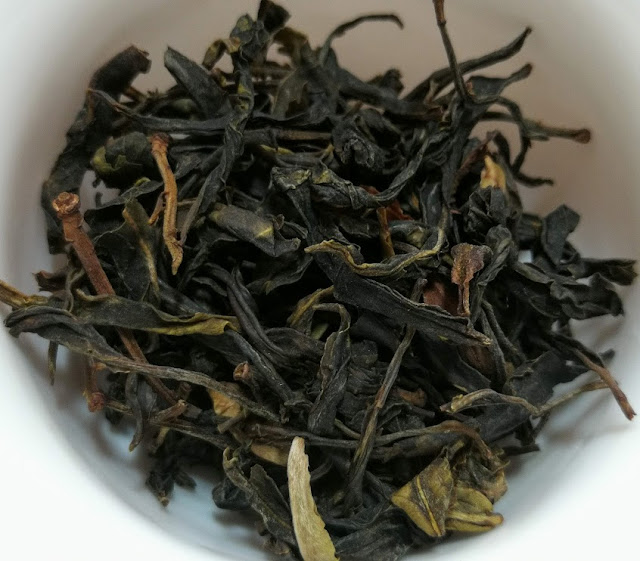 One more really interesting looking tea version from Moychay (provided by them for review, awhile back, so this review is one of a significant set).  I'm not great with keeping up with origin back-stories, type-typical regional character, or memory in general, but I seem to recall this origin being said to relate to wild source teas (in some cases; such a thing would never be universal).  If so it should be flavorful and a bit unusual, and those are often paired with less bitterness and astringency structure common to other sheng versions.

That would match what I've just tasted, since I'm writing this after that part, but it was more or less what I expected going in.  I'll go straight to checking what Moychay says about that:

"Dark Leaf" was made from the first spring shoots of thousand-year-old tea trees with dark leaves (Da Hay) in March 2020 in Younde District (Lincang County) in the Northwest of Yunnan Province.

In appearance: large, dark-green flagella of twisted leaves. The aroma is intensive, floral-herbaceous. The infusion is transparent with white grapes hue.

The bouquet of ready-made tea is vivid and fresh, multifaceted, herbaceous, with floral, nutty and fruity notes. The fragrance is fresh and tender, deep, floral- herbaceous. The taste is full-bodied and sappy, oily, sweet, a bit tart, with light citrus sourness and lingering finish.

We can just set aside the "thousand year old" claims; once tea trees seem a bit old there's no need to consider specific details beyond that.  Even for "gushu" the brewed tea character is either what you sort of expect and value or it's not.  That description is close enough to what these tasting notes say.  Citrus seemed prominent, and I did shift from initially thinking it might be a touch sour to interpreting that as a bit tart.

The tea is a bit pricey (on towards $1 / gram); it's more typical for me to comment when value is unusual, when a tea is really good and also inexpensive.  This is hard to place related to a standard retail value.  More-wild teas come up but not many as refined as this; often a flaw or unusual and negative aspect will creep in.  Significant sourness can come up.  When teas are on the rare side, as aged tea versions are, or when you just don't see a lot of examples it can be hard to place a normal retail value.  That's especially true of a better than average version within a less common type.  I wouldn't be buying much of anything in this price range, and just couldn't on my tea budget, but just trying a little of this would cover some of the same function, and the smaller sample sizes aren't so much different from the 100-gram rate.

This "wild tree" type reminds me of a comment by one of the best resources out there, Lawrence Zhang of the Tea Addict's Journal, in saying that he sees them as tisanes more than conventional sheng.  In one sense that's an odd judgement about limited genetic range and style variation, but in another it makes a lot of sense, related to the results often being that different.  That was in a podcast video that's well worth checking out.

First infusion:  sweet, aromatic, not relatively bitter or astringent at all; quite pleasant.  It is a little unusual as sheng goes for flavor profile, with extra depth across some fruit range, and just a trace of what could be interpreted as sourness.  I don't think most people would flag that as sourness; part of that interpretation comes from "looking for it."  Since this infusion is very light I can do the flavor-list approach more justice next round.  To me the fruitiness seems to span citrus, covering both a rich, sweet orange and a touch of grapefruit, but there's a lot more going on in this.  I already know that I like this tea but that may relate to being especially open to this particular style, from liking a lot of similar versions in the past. 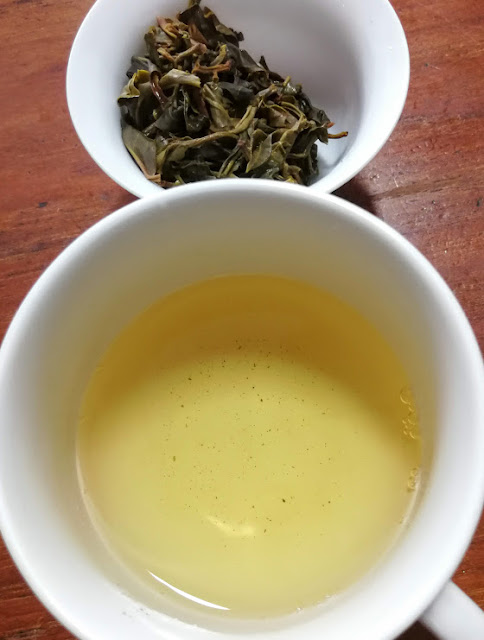 Second infusion:  much more intense; that will be easier to work with for analysis.  A really cool creaminess picked up in this.  It's not structured in the way young sheng tends to be, just not exactly thin or loose either.  It's smooth, rich, and creamy instead; that's different.  This feel would be more typical of an oolong.  Fruit is complex and intense, standing out most for flavor range.  One part is citrus, spanning a lot of citrus scope it seems, a little like orange, lemon, and sweet grapefruit.  Then additional fruit is more like peach; definitely different.

This isn't really sour, although a trace of tartness is unusual.  It comes across as simple in one sense but also more complex than that flavor list yet describes.  Fruit is by far the main input, with very moderate bitterness, and it's hard to identify what else is giving it the effect of complexity.  There's a sort of green wood flavor that connects with the fruit, integrating with it, making it harder to separate out.  Sweetness is really nice; along with the fruit range and this being so approachable it makes the rest work well.

This contains some yellow leaf (huang pian), evident from the appearance; that would add to the mildness and sweetness, although the rest of the material must already be a good bit like that. 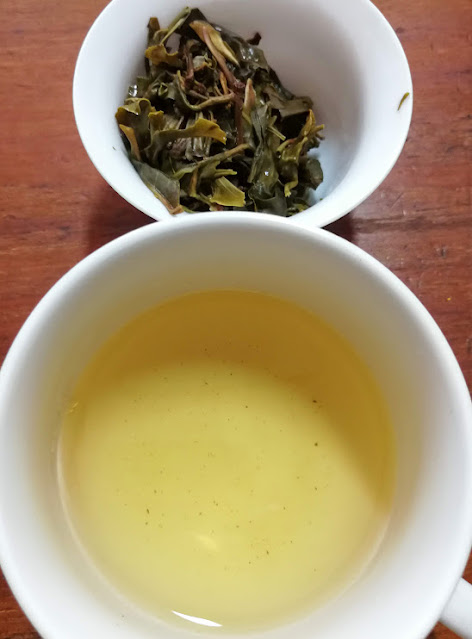 Third infusion:  warming a little, with underlying mineral picking up some.  Otherwise it's kind of similar to the last round.  I can't imagine why anyone wouldn't like this tea, but I guess someone looking for a more conventional young sheng profile could be disappointed.  Intensity is ok, and to me that mild bitterness works really well, versus a heavier expression, but it definitely falls short of where better range sheng covers for both.

The biggest trade-off for this tea is probably aging potential.  This would probably warm and soften a bit more over the next couple of years but I'm not sure it would age well, or even change positively from there to 4-5 years.  There's nothing challenging to transition to something else; that bitterness, astringency, and heavy mineral serves a purpose.  I suppose that's just a guess, but I didn't just start guessing about that kind of thing in the last year, so I've seen some cause and effect play out, a little, just never for the 15 year cycle.

Fourth infusion:  that lemon edge stands out; it shifts proportion of what had already been present a bit.  Even brewed a bit fast and light the intensity is good; the bright, sweet flavor range comes across well.  There's very limited intensity in relation to bitterness or typical feel structure, with this creamy and full instead as I mentioned, but flavor intensity is good.  All that citrus fruit really seems to link to an unusual tongue feel, rounding out that richer fullness, so that there doesn't seem to be a lack of structure. 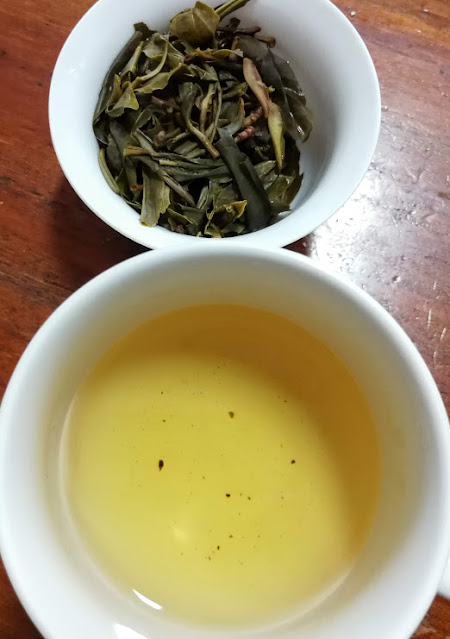 Fifth infusion:  not shifting so much, brewed slightly longer to see how that works.  Flavor intensity is fine brewed light but the extra punch and creaminess is worth it for adding a bit of infusion time.  In a sense this tea is simple, combining a few aspects and limited range but intense flavor, but it all really works.  It's catchy.  It may not be what everyone loves most but I could drink this every other day.  The brightness and freshness is so nice.

Later infusions:  more than transitioning in character the tea did just fade, but the intensity and creamy mouthfeel hung in there relatively well for a significant number.  Some sheng versions will keep going through late round transitions, and others will just lose a lot of their range, but this seemed to stay in a similar character.