Talking to Bronislav Vinogrodskiy, the father of the modern Russian tea tradition 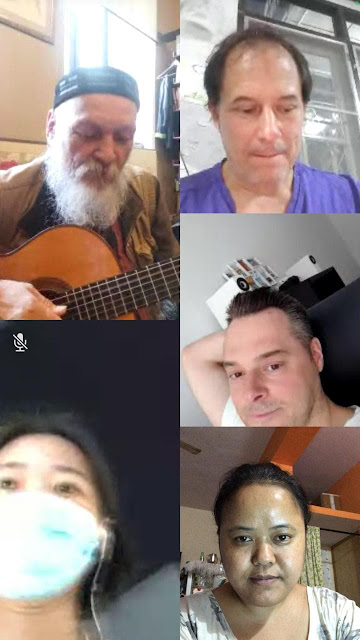 So much interesting scope to uncover in this, even though I won't get to most of what we talked to Bronislav about, for the usual reasons, mostly that discussion covered a lot of scope.  Let's start back with who he is, and justify that claim related to him founding a national tea tradition.  I won't cite it here but in talking to a number of Russian contacts about tea themes that cultural transition role credit is always consistent.

For context, Russians have drank tea for a long time.  I'll surely get the history and cultural context slightly wrong, which I covered further here, but my take is that consumption of herb teas (tisanes) is a longstanding tradition in Eastern Europe, and an old connection with China had developed tea interest.  Then a sort of difference of political views and reduction of trade volume with China led to Russians drinking more Sri Lankan tea.  So it was on a base of tea interest that a modern tea enthusiast movement developed, similar to but different in form in relation the US range of experience.

Bronislav's personal context related to studying Chinese language and culture, and doing a lot of research, translation, and commentary based on Chinese philosophy and religion texts.  He's written many books on a diverse range of subjects along those lines, with special emphasis on Taoism and the I Ching, a very old practice of Chinese divination (fortune telling).  He also mentioned studying other broad schools of ideas in that discussion, which is part of what I won't describe in detail here; a partial summary is enough.  I'll speculate about that divination theme more at the end here, but to be clear I've not discussed that subject at length with him.

So what he brought to Russia was awareness of a higher quality range of teas, and a tea club practice, which has taken firm root there, and extended into the presence of many such organizations and facilities.  It's not exactly like a Western cafe, and doesn't really fit well into any Western paradigm.  I suppose the main parallels would be drawn from Chinese culture and settings, which I'm really not familiar with.  In this talk he mentioned a bit more about that development step, the sharing between cultures.  Just not the details of the forms it took along the way, eg. moving from a social group or academic interest scope, onto being based in non-dedicated locations, then as new facilities forms, and so on.

He explained that he saw helping develop an interest in tea, and practices related to drinking tea, as a sort of experiment in introducing an aspect of one culture to another, or sharing forms.  This leads directly to those religious / philosophical underpinnings, which also connect.  It brings to mind the tea ceremonial aspects that are slightly familiar in "the West" now, just perhaps expressed in a range of different forms.  The older Taoist-oriented Chinese form isn't as rigidly defined and orchestrated as the Japanese tea ceremony, which is more about adherence to physical forms and meditative approach than the tea itself (per my take, at least).

A couple of loose threads remain, right, beyond questioning those intermediate steps?  How did one person manage to make that much change?  How did it "scale up" from beginnings in the 80s / 90s to being more mainstream today; just how fast did it develop?  This summary covers a lot less than it points towards.  Bronislav has published a number of texts (in Russian though), and holds regular speaking or workshop events, and has lots of content on Youtube.  It seems likely that if Google can provide a rough translation for that video content, in subtitle form, it would make for the easiest access into some of the rest.

Let's back up to another starting point instead, to the introduction he gave us about his surroundings and his place in Russian tea culture, and about other interests.

Bronislav gave us a tour of his workspace and personal space in Moscow, a great introduction to some different themes.  He has a very impressive jade collection; a lot of diverse pieces, that represent forms within Chinese culture that I'm not familiar with, in addition to some that did ring a bell.  His paintings are nice, some abstract, some interpretations of reality.  A collection of Chinese reference texts and a short summary of his own published works was especially impressive.  Then the context that really made it relatable is how grounded and pleasant he comes across, as very genuine. 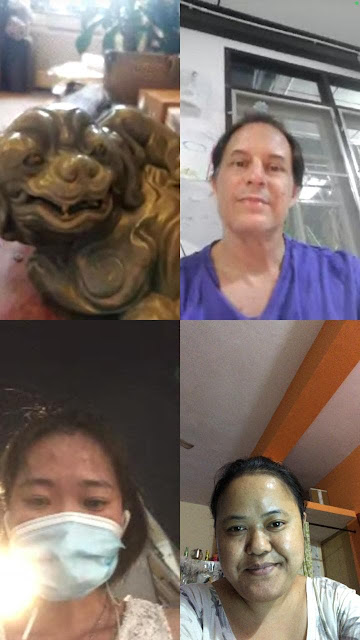 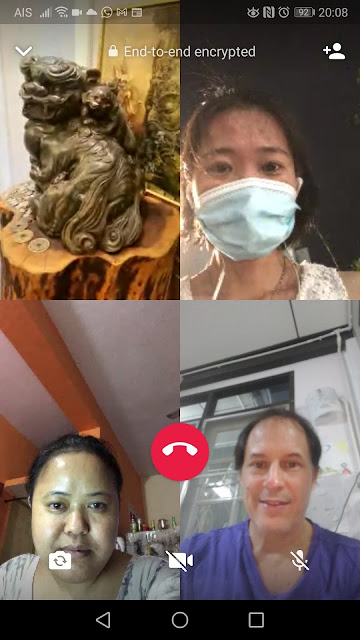 It would be easy to take yourself a bit too seriously given that context of chasing an extensive set of related themes like that, and past successes.  He's developing ideas and works that dig deep into a foreign culture, across academic and artistic scope, related to a set of developed life practices.  Maybe seeing that context as "grounded" seems out of place, in relation to the other points I just made, but to me it connected back to an ordinary if slightly unconventional experience of reality.

He played some flute and guitar, introducing music as a theme that's important to him.  To some extent we can all connect to that, just for most not extending to creating music.  Bronislav explained how it serves as a meditation form for him.

This connection between tea themes and other Chinese culture was especially interesting.  I've formally studied Chinese philosophy and religion related to Buddhism and Taoism, but the subjects don't directly overlap with Western categories.  It's all a practical guide to living, based on cultural forms and extended to perspective and practices that aren't similar to a more analytical Western tradition.

To help place that, to me logic and reason have their limits, and parts of life experience we can only model and treat indirectly, or just go with.  I gravitated more towards Buddhism, which places introspection and atypical self-development at the center, versus Chinese thinking emphasizing culture-based forms more, or integration with complex systems found in nature.  It doesn't conflict as much as it might sound.  Confucian teachings emphasize learned practices but Taoism is about adherence to natural patterns.  It's one of two separate inputs to create Zen Buddhism, which first evolved as Chan Buddhism in China.  According to a Chinese philosophy professor Chinese people can freely alternate between those three main forms of ideology across phases of their lives (Confucian thought, Taoism, and Buddhism), taking up whichever one suits them best related to their current perspective.

From there, to me, the next step towards the I Ching and divination requires a bit of unpacking.  From the oversimplified Western perspective (as much as there is just one, which isn't how that really works), we can simply "throw out" I Ching based fortune telling, along with astrology, and still embrace the functional input.  I'll explain that further, but astrology I'll set aside here.  I've experienced that in two completely distinct forms in the past, and it seems to work better than it should.  Maybe that's only because observing generalities is functional, whether or not specific predictions are ever accurate.

Bronislav and I discussed more long-term patterns in cultural development in that first talk awhile back.  I don't want to go too far into summarizing his position or views, because very short discussions didn't give me significant understanding of those.  But obviously long-term cultural transition patterns do occur, and to the extent we can consider these, and draw on other observations about them, a different perspective on societal and cultural changes could open up for us.  It's a similar theme that astrology and I Ching predictions could "work" even if they "don't work."  Observing underlying patterns could be very helpful, even if picking out the next pattern to be most relevant isn't going to be accurately dictated by star positions or throwing dice.  Where astrology talks about perspective patterns (personality forms and choices in relations to circumstances), the I Ching discusses event patterns and perspective context more, about cycles of personal transition, how to react in steady states and times of transition.

The most natural take on what I'm saying is a bit too reductive, that it only works to consider forms of patterns.  How else could a few hundred words on a complex cultural tradition go?  To some extent the value really is in the details instead.  I'm tempted to describe more about that personal experience with predictive astrology, about two specific predictions about my own life that "came true," and two others that are still open, that may or may not.  This whole post lends itself to pointing towards saying more later, introducing themes that it doesn't develop, so that can leave off in the same form. 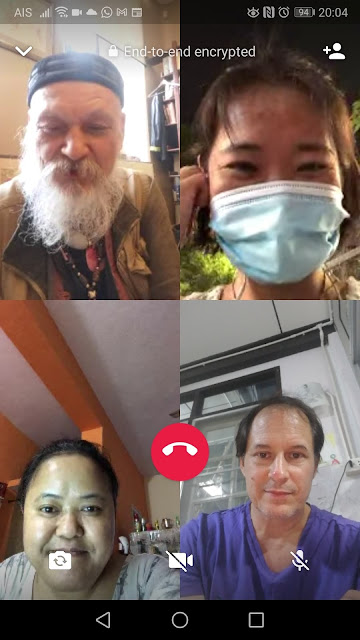 One interesting theme was how Russian culture embraced parts of Chinese tradition so quickly.  Even without Bron's input a range of answers come to mind.  One is that it didn't; for sure the average Russian doesn't drink Chinese tea now.  On the opposite extreme it was a time of national and cultural change (the 90s, right after the end of the Soviet Union), so that people were quite open to change and new perspectives.  Such themes would probably be especially attractive when they overlapped with existing forms of Russian culture, but built on and developed those.  Or even when they didn't; according to our guide in Murmansk--one of overall favorite contacts in visiting Russia--interest in traditional religion was renewed at that time as well, in orthodox Christian belief.

These discussions about tea, Russian and Chinese cultures, Chinese philosophy and modern culture transitions (both not really covered in this session), jade, and Bronislav's personal history were only an introduction.  In a sense I suppose that could've been interpreted as unsatisfying, but to me it was very interesting, and much appreciated.  It would be really interesting to hear more from other references from him, and his Youtube videos have been set up to auto-translate into an English language form.

For the discussion time being a bit short we focused on introduction.  It would've been nice to also hear Bronislav's take on societal changes in relation to this pandemic.  Of course it's just bad luck and virus mutation causing it, but the past year and a half have been an unusual time of change.  Surely his perspective on how broad societal shifts work out is very interesting, especially in relation to how people tend to react to such circumstances.  Ancient Chinese philosophy and the psychology of dealing with personal stresses are two different things, but the overlap must be interesting, and probably quite informative.  His online content must have delved into that a good bit already; if I hear more in looking into it I'll check back in here about that.  For online references he posts on Instagram and has an independent web page, which outlines more on seminar events and such, and a Facebook page referencing some of the rest.