I've ran across a few versions of tea flavor wheels since getting into tea.  These are great for identifying a number of different related flavors, to help with guiding palate development for separating out the flavors in different teas.

Personally I've faced a few hurdles with this.  With practice ordinary flavors aren't so difficult to identify, although at first they sort of are (grass, spices, floral components, earth elements, etc.).  A few seemed unfamiliar at first, then later quite obvious, especially butter, malt, and cocoa.  Aside from that issue I'm not familiar with a lot of types of smells that relate to flavors that are not tied to food tastes, like different flowers.


Two sample flavor wheels follow, both of which are not so different, and seem pretty good:


Using the wheel, how to taste tea

Twinnings has suggestions on their site about tasting tea, more methodology than I use related to this.  They mention trying to identify what you taste as the general flavor impression that strikes you first, then the main impression, and the most detailed flavors that linger after, as head, body, and tail.  Tea tasting classes would identify tasting methodologies like this better, with guidance on specific examples.  Of course the idea of a "finish" is not unique to tea, and can be an interesting effect.

For me the teas seem to separate out into flavor elements on different levels.  I think of them in a spatial way, as a base of main flavors, with some undertones that underlie that, and "higher" tones of more specific and somewhat isolated flavor elements.  One could instead think of these as front, middle, and back, closer to how Twinnings is describing tasting, but their method is chronological, not really related to how individual flavors seem to strike the palate differently as an arrangement of different component levels.  Some teas emphasize a certain "level," for example some oolongs might have lots of rich flavors and a nice feel but not so many "forward" or "higher" flavor components.

All of this could make tea tasting more complicated than it really needs to be.  Some teas seem to present quite simple flavor profiles anyway, just a few basic flavors.  Or complex teas could include many flavor elements that are so mixed it could be hard to separate them out without a lot of practice (like a blended tea might).  More typically good single-source teas seem to show a number of different flavor elements that one can identify separately with practice, as the categories in these wheels indicate.  For me if I like the flavor elements that works better than looking for a certain balance in different types of tastes and body elements, but then what I like changes over time.

As I've been tasting teas it occured to me that these wheels are incomplete.  In the tropics there are a number of different vegetables, fruits, and herbs, and many of the flavors on these wheels would be known as imported foods that not all would have much exposure to.  There are "tropical" fruit sections on these, the main ones familiar in the West, but even for the few mentioned there are lots of types of these fruits covering a range of different tastes.  In Thailand and elsewhere there are many individual types of mangos, pineapples, or even bananas, all of which share some taste components, but all of which can vary quite a bit, as apples do.  Even more fruits you just never hear of in the West:  mangosteen, rambutan, longan, longon, jackfruit, durian, and so on.  Most of them are delicious and easy to adapt to but unfamiliar textures can be an issue.

For vegetables, herbs, and flowers the difference is more pronounced; Thais eat dozens of things that initially were unfamiliar to me.  Some of it translates or can go by Western names (like banana flower, lotus root, or morning glory), or some only seem to have Thai names, so often I'm eating things I recognize on sight only. 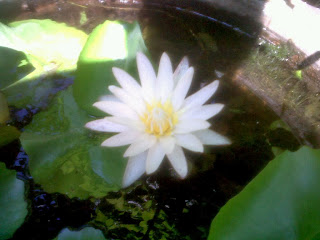 Back to tea tasting:  recently I was trying a bai mu dan (or white peony) with a friend, which seemed to taste like apricot to me, an element described in the write-up as melon.  She said it tasted more like dried persimmon, which was exactly it.  I've had fresh and dried persimmon but I never would have made that connection.  It's hard to describe what the fruit tastes like, maybe like apricot.

That same friend had mentioned some teas taste like orchid, or lotus flower before, but not being familiar with these smells I couldn't really know.  Later I checked by smelling lotus flowers at the house when they bloomed.

Tasting flavors as they come up in teas is a good way to "train" the average tea drinker, but there might be other ways to push that further.  Nigel Melican recently posted about use of aroma samples in wine tasting (sample site link), which could also be applied to tea.
Posted by John B at 7:31 PM