Normally I prefer very simple versions of teas:  no flavorings, no blending.  But there are exceptions.  A decent cup of Earl Grey is nice once in awhile, trying out blending with something like chrysanthemum can make sense, and someone bought me a nice floral blended Thai oolong tea not long ago.

Gui Hua is typically produced in Taiwan, named after the osmanthus flowers blended with tea leaves to produce a sweet, fruity, relatively subtle tea.  By chance I just talked to a friend in Beijing about this particular type of tea, which he said was a favorite, mostly due to the more subdued floral taste than in a typical jasmine tea.  I've only tried this one example and it is so; a balanced, lighter floral flavor element that matches the rest of the taste profile well. 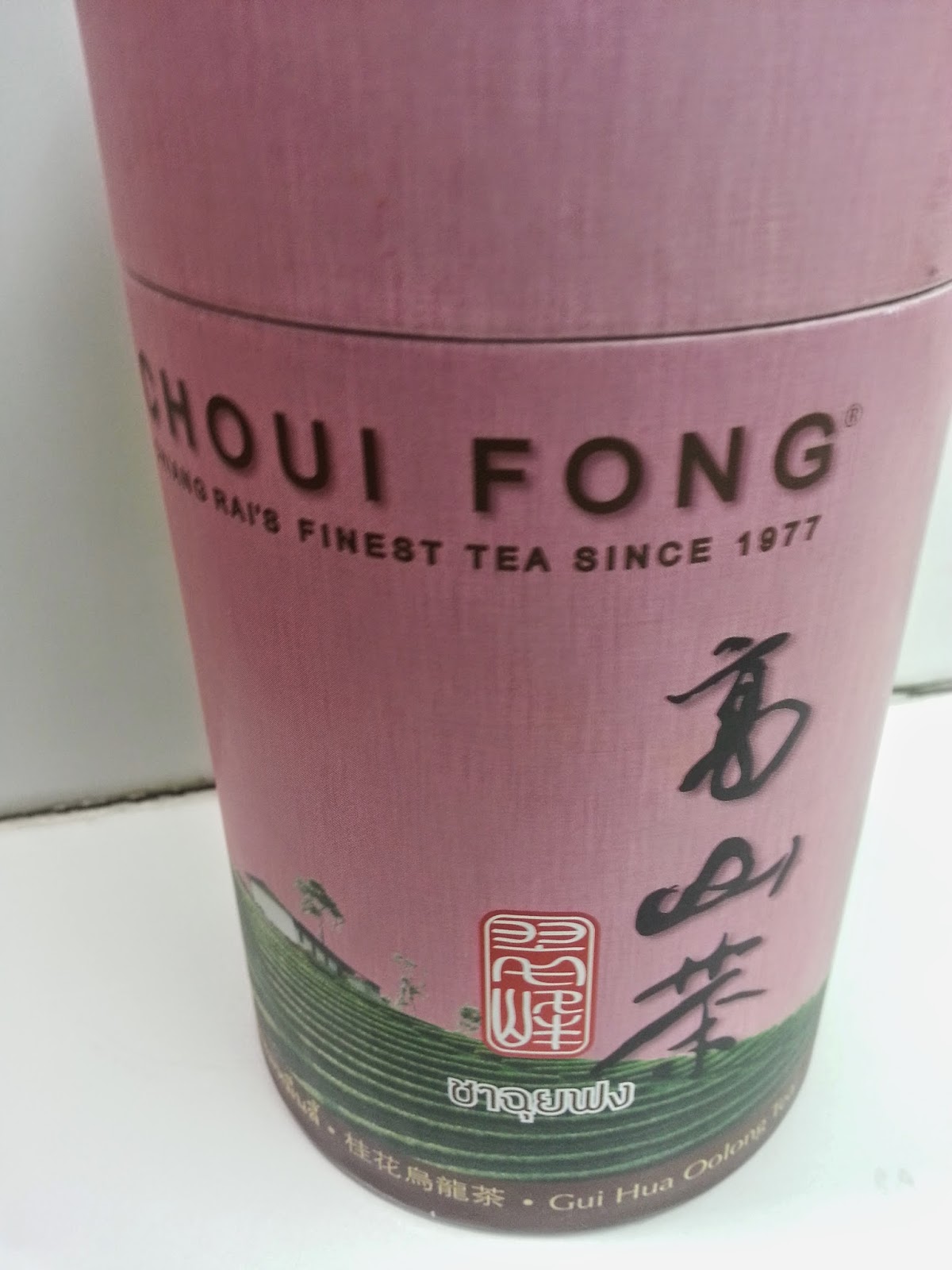 
In addition to "floral" the taste hints towards fruit flavor tones like peach (producer reference page).  Comparing it to other floral flavors or scents isn't easy without a better memory range of floral scents; maybe like a lighter version of lavender.

The tea itself seems to be of reasonable quality, not so easy to fully make out under the floral tones and sweetness but the smooth, balanced, flavors are just what you'd expect from a decent Jin Xuan.  My friend mentioned in China they blend lower grades of tea to cover flaws (almost goes without saying that would come up) but this seems like decent tea. 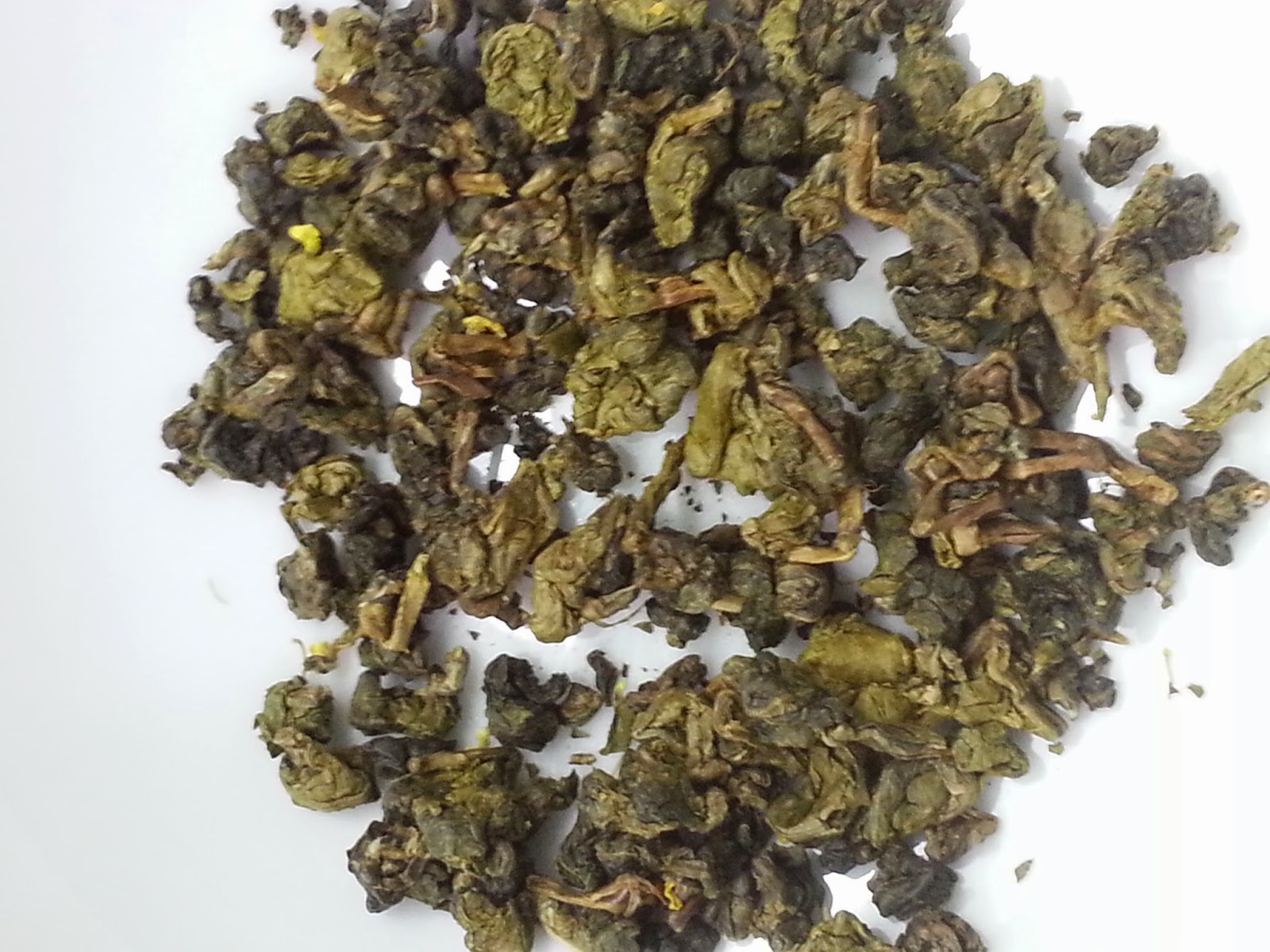 I've tried plenty of the tea and kept considering how to describe the taste beyond "floral."  In terms of other flavors a comparison to bubble gum comes to mind (like the kids' soft pink type).  It's funny how lately I keep comparing tea flavors I like to tastes that don't sound pleasant at all, like cardboard, or tar (not to mention stones or wood).  The "bubble gum" taste works, because it doesn't taste just like bubble gum, and because it's at a subtle level that still lets the taste of a "buttery" oolong still blend in (typically just a rich taste element, although some Jin Xuan can naturally taste a bit like butter). This wouldn't be one of my favorite teas because I really do prefer "plain" tea more, so it's more about being amazed that I like it as much as I do.  Sometimes when drinking teas I have a good bit of (the package included 200 grams) that particular tea can become boring but somehow it works really well as an everyday tea.

It's also incredibly forgiving in terms of preparation timing, which comes up since I've been drinking it at work.  I try not to take 20 minute breaks to make sure I get multiple infusions of tea just so (usually).  If you brew it for only 2 minutes the nice flavors are still there, not really even too weak, and if you completely forget the tea it's still actually good after it brews to cool, just a bit strong.  There's no way to get astringency out of the tea, actually normal for Jin Xuan oolong.

There isn't much more to add.  I've not included a picture of the brewed tea "liquor," or brewed leaves because they are exactly like any other Jin Xuan oolong:  darker gold (which is sometimes a slightly brighter yellow), and a mix of leaf sizes, generally on the larger side.  The maker described it as seen as a "woman's tea," and I could see that, even if there's nothing wrong with a man preferring a subtle and fruity white tea or a woman loving a pu'er that some would describe as tasting like wood, tar, or camphor.

Related to another post I've been working on, and my general impression that you couldn't possibly find decent tea in a grocery store, I just saw this and a few other "decent" teas being sold in a higher end grocery store here (in Bangkok).  I pay a price for living in a city here--time spent in traffic, isolation from nature outside of parks--but being separated from good value mid-range tea options isn't part of that.  Here I'm using "mid-range" as something of a compliment; this isn't the type of rare tea someone is out there hunting down in remote regions in China but it is decent tea.