For someone interested in reading further or glancing through some summary ideas this might be a great reference, and for someone else only interested in tasting notes on a specific tea all of that was already in the earlier related post.

One of the subjects that interests me most is what occurs when pu'er ages, how flavors change, etc.  A lot of that background is generally about ideal or problematic storage conditions, or other specific problems, with the most obvious concerns seeming to relate to humidity.  Higher humidity conditions are said to age a tea faster, up to the point that very high humidity or intentionally "wet" storage conditions would require careful monitoring of tea condition, and very dry conditions would interfere with the normal long-term fermentation process pu'er undergoes.

At this point I'm more concerned about more basic issues, especially what changes in terms of the taste of the tea.  Since I now live in Bangkok I need not be worried about low-humidity storage concerns but might keep reading up on the possible effects of storage in a hot or variable environment.


Related to the three production years of the same tea that I've been trying, it seems possible there could be other differences.  I wouldn't know to what extent the produced tea itself changed over those years, and couldn't be completely certain storage conditions were the same for all three.  It wouldn't seem possible to assess what extent aging played in the differences related to other considerations.

Discussions of the issue of aging shu pu’er--"cooked" or additionally processed tea, really not cooked but wet fermented--in various on-line conversations don’t move toward a consensus.  Opinions vary between a position that these teas really don’t age after a few years of somehow settling, to claims that they do improve with age, including more improvement and significant change in taste over long time periods.

The descriptions that came with the tea from the manufacturer claim it would improve over time if stored properly.  It’s generally said to be more of an issue with sheng pu’er, with the additional processing more or less simulating long term aging, but that relative difference doesn’t change the same general types of concerns for shu pu'er, it just limits them relative to the less processed type.


An article in "The Leaf" reference publication on what changes when pu'er ages and how flavors might change, with a little on storage condition factors, doesn't provide simple summary answers.  The article essentially says that aging and changes depend on so many factors so it wouldn't work well to generalize them.

One personal blog entry by Nicolas Tang addresses the issue of aging sheng (green) pu'er directly, especially the question of what type of sheng pu'er tea should age well, and how astringency (bitterness, roughly) relates to that:

...it seems that it’s not the case that strong astringency is better...  Good young sheng should have a “thickness” in the liquor. However “thickness” does not equate to “bitterness”. “Thickness” should relate to a thick taste, a fullness in flavour (as opposed to thinness), abundance of interaction with the mouth.  Applying a strong brewing period (in excess of 1 minute), we also find that all puerh tea becomes bitter...


I'll write more about it in a later post but another sheng / green pu'er I've recently tried, and a second previously I did already write about, which lead to as many questions as answers about bitterness and sheng pu'er aging.  One tea isn't dated but seems likely to be quite young, but the taste isn't astringent / bitter in any way, while another that has been aged for years requires careful brewing technique to limit this aspect.

Basically dark teas such as Pu-er improve with age....  Aging is especially essential for sheng pu-er or raw pu-er.... Young sheng Pu-er tastes bitter, astringent and generally consumption is not encouraged because it is considered very damaging to the stomach (伤胃) in Traditional Chinese Medicine (TCM) belief. Generally consumption is not encouraged within the first 3-5 years of harvest and the taste- as well as health properties- improve with age.

The more interesting point is the tea being described alternatively as either a beginner’s tea or a classic favorite recipe, a baseline other similar pu’er types are gauged against.  One “tea friend” said both descriptions could be right in this case.  At any rate the tea wasn’t overly expensive, and seems to be widely available, so the point of seemingly opposing references was more interesting than any relative ranking these implied. 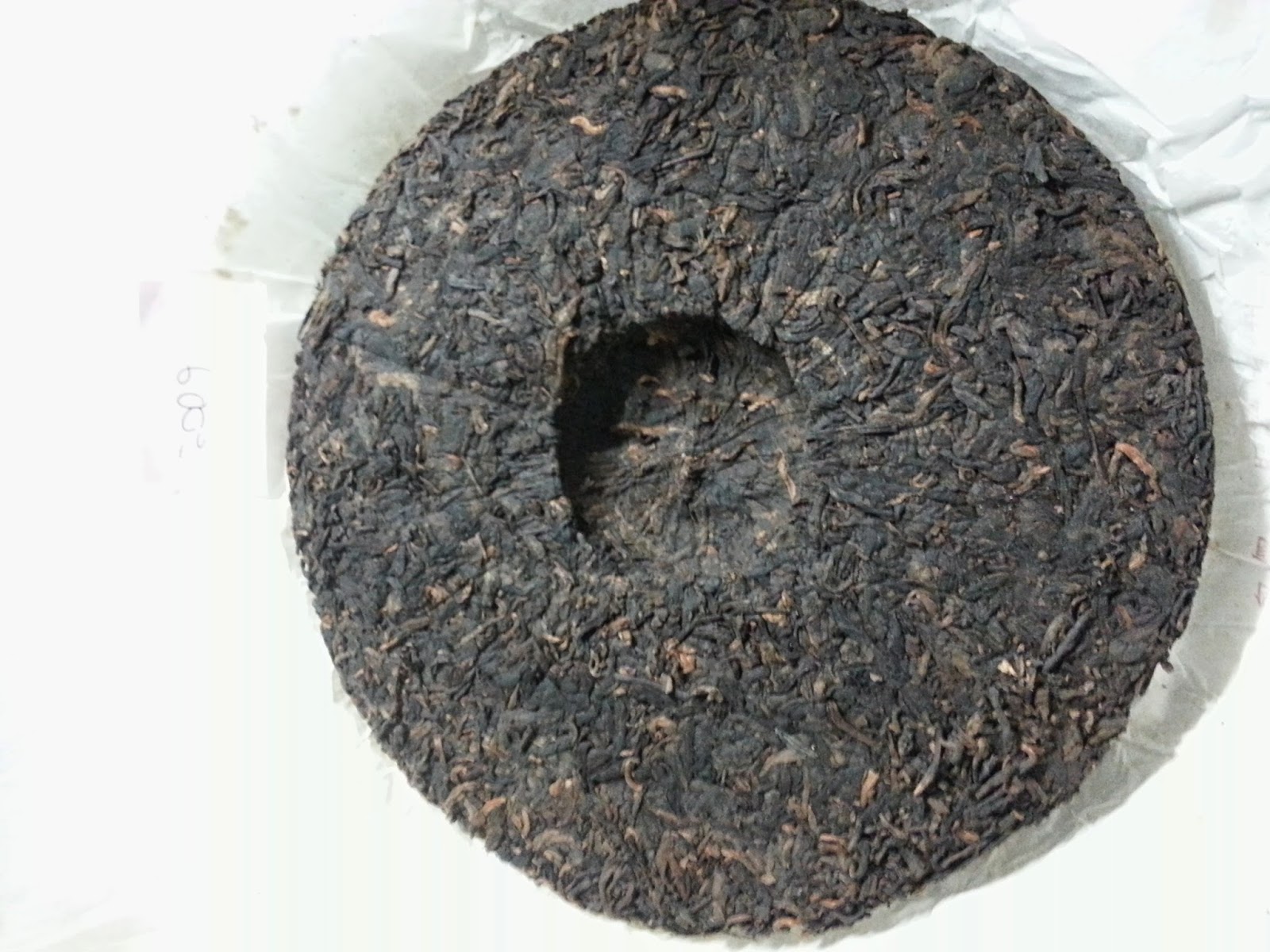 I'm including a few references to the tea here, most descriptions from vendor sites selling it.  These are not suggested as the best sources to obtain this tea, just some Google search results to show how descriptions of the same tea can vary:

Steepster tea 2009 7572 reference page:  there isn't really a general product review on this page (individual reviews to other year versions are linked elsewhere), but there is a lot of description content which I'll cite here:


This ripe cake is Menghai Tea Factory’s archetypal ripe tea product. It was first developed in 1970’s. It has used golden hairs fine leaves for the cake surface and fat green leaves for the center. Moderately fermented, it is brownish red in color, yielding a bright red broth. The overall quality is high, and this product enjoys broad acclaim. This tea is considered the market standard for ripe Pu-erh tea products.

One in particular by Charles Thomas Draper   references an issue I've already been discussing, how pu'er teas age over time, but in this case in relation to shou instead of sheng and in particular this specific tea:

I noticed a vast improvement since my last tasting.  I have several young Shu such as this that I will sip from time to time to see how they are aging. This one is getting there. Another raising of the score….

Given this review was written two years ago (2012) for the 2010 tea this implies a lot about specific timing of this type of tea aging.  That is, at least from his perspective, which I accept as significantly more informed than my own, surely at the other end of the experience spectrum.


Yunan Sourcing site:  "classic recipe," recommends at least a year of aging to improve flavor.  The description is dated since tea is now 5 years old, but it raises an interesting question about changes over following years.

Tuocha Tea website:  classic recipe, a standard for ripe pu'er, not so different than the other references, just one more

A reference blog post by Nicolas Tang covers his experiences with buying fake versions of the same tea.  This includes a very detailed description of various ways to determine authenticity related to both the packaging and the tea.  The photos of counterfeit packaging elements are amazing, similar in sophistication to forgery related to currency, and in the end they still need to include tea.


Tea Chat discussion forum of the subject.  It is interesting that one comment by "Zhi Zheng" suggests

The tea's either good or it's not.  It's possible that a tea in a 'fake' wrapper could be better than a tea in a 'genuine' wrapper.

Others go on to discuss that if the tea isn't from Yunnan it wouldn't be considered real "pu'er," and of course if not by the same manufacturer and of the identified product it wouldn't be the tea meant to be purchased.  It would seem unlikely that many "fake" teas would use a superior product but the obvious reason to sell tea as something it isn't would be cost difference, and supply and demand issues would relate to that.  Other references have suggested at lower prices it is less likely a tea would be "faked," and the effort and expense required to produce all of the counterfeit packaging would cut into the margin.


"Puer Tea Blog" reference, blog related to a pu'er vending site:  repeats the idea that the tea might not necessarily be so much worse than the genuine tea, or even could be better, but raises the issue that depending on what tea is used and how it was treated (for example to appear more aged than it is) it might not age well later even if it tastes good initially.

Another vendor site reference, JAS eTea's,  references some basic advice ("5 ways to tell if your pu'er is fake") that includes the general guidance:   the taste of a true pu-erh tea cake will be complex, ranging from lightly floral, heather, fruity, and honey-like to leather, harsh peat, tobacco, organics, wood, grass, and deep earth.

This matches my limited prior experience with tasting pu'er teas, but would need to be considered along with the general advice that pu'er teas will be more complex and superior related to appropriate aging.


It's getting a bit off-topic, but I've recently read a nice "A Tea Addicts Journal" post that includes a reference to a fake pu'er tea in a story, more about the practice of storing teas versus drinking them than about fakes.  There was another blog post on aging pu'er, and a separate one on the learning curve related to such teas and aging issues, but these posts don't really lend themselves to citing a phrase or two as main points.  Given the depth of content anyone interested in these subjects really should just read those entries.

I won’t have much to say about this since I really don’t get it, but I’ve discussed the subject of different feelings different teas cause with different people.  Pu’er from old (ancient) tree sources is mentioned most related to this topic and effect.

It’s really not possible to summarize what the claimed effects should amount to, but lots of general concepts like alertness and relaxation relate, typically described as not to be captured by such simple concepts.  One friend also claims that you can feel the tea effect in your mouth, on your tongue, or in other parts of your body, in addition to a more general feeling typically described.  A couple reference links on this:

One vendor cites a number of reasons to drink tea from "wild" ancient tree sources without the emphasis on a feeling derived from the tea.  The reference points out there are likely to be no pesticide issues related to consuming such teas, and other reasons as well, including better taste:  http://wildteaqi.com/8-reasons-drink-ancient-tea-tree-tea/.