Today when I came to work there was a tea brewing timer sitting on my desk, but with no indication of who put it there.  It has a cool look to it, with three different sand timers for three different types, from Twinings.

Of course my first thought was "my kids are going to love playing with that."  Next I wondered who put it there.  Then after a lot more synapses firing I wondered how well it would work for timing tea infusions.

If I timed tea brewing more often that thought might have came up earlier.  I experimented with a tea brewing app once, a little, but didn't use it much to time stopping an infusion process.  I got stuck at the part about the times it suggested as standard not matching other references for standard brewing times, and sort of kept on winging it, experimenting with changes a lot.


I had started drinking a lot of loose teas about six or seven years ago, oddly enough years before really going overboard with research and purchasing, so I was thousands of cups in by the time the idea of optimizing would have made much difference, and already decent at guessing out times.  I was over a decade into drinking tisanes before switching to tea made from tea at all (tisanes = herbal teas to most people), so I was lots more thousands of cups of brewing those along prior to then.  But tisanes do tend to be a bit forgiving, and of course tea from the tea plant does require a more careful touch to get better results, or optimization (for some).


I'd like to say I've internalized brewing to the degree that I vary every tea related to temperature, ratio of tea, and time by type, and to some extent that's actually true.  A lot of infusions are a test of varying these, and I don't vary them as much as in the past.  Of course I take vendor instructions into account or even actually use them as the case warrants.


Google mentions that a "Tea Guy" blog post lists a number of different apps for this.  It doesn't take much clicking around to see the same issue coming up, along with the related concerns of brewing temperature and tea to water ratio.

Note that this table isn't shown as an indicative optimum for these teas; it's an example from a blog page details about the app.  Of course it's going to let you adjust these parameters for preference (surely?).  From this image it's a bit odd that two types of dragonwell (longjing) could have differing brewing parameters, but of course such a thing could happen.  The parameters don't look so far off at a glance but comparing them to other tables will show the odd part about "standards" differing.


But then after an hour of looking around for standard tables not much turns up.  There is a lot there in a Google image search, and the typical major tea producers are going to say something, but other reputable references are hard to find (bloggers, standard tea resources).  You see bloggers mentioning the standard parameters versus what a manufacturer says relatively often in posts but that could as easily be related to their typical, learned preferences, not some objective consensus.


Before I get into all that, a bit on what times the sand timers indicated.


Odd, right?  The first thing that seemed odd is that white teas are often recommended for the longest brewing times rather than the shortest, sometimes for 4 or even 5 minutes instead of 2.


3 to 3 1/2 minutes might be an average recommended time for brewing in general (varying so much related to preference and other parameters there would be no standard), but it would seem odd to brew green tea for nearly five minutes.  Green tea is actually kind of a broad category anyway (oolong or black tea too, for that matter), so citing just one time wouldn't make sense.


It's probably about time to get back to some tables and see where any of this stands related to research.

One last tangent before I do get to these:  the question ignores a general separation in brewing technique into two types.  Related to the same general question in a LinkedIn group discussion (in Tea Enthusiasts and Entrepeneurs), I commented this (really the question was about adjusting tea strength by changing different brewing parameters--close enough):


The question doesn't address the context that in general there are two different approaches to brewing loose tea.

One relatively Western version relates to standard brewing times (3 to 5 minutes, typically using a teapot, although the vessel doesn't matter as much as water to tea proportion and timing). A second technique typically referred to as gongfu cha (which translates roughly as tea technique) uses either a smaller pot, generally clay rather than ceramic, or a gaiwan with a much higher proportion of leaves to water and many shorter brewing times.

Different references vary for the second technique brewing time depending on the strength of the tea desired, but it's not uncommon to see very short brewing times used for some tea types resulting in a very diluted version of the tea (of course intentionally).

So to answer the question, one would select a general brewing technique then other aspects like desired tea strength, vessel, number of infusions, etc. based on preference, which would also relate to tea type. A black tea would generally produce less infusions than other types, perhaps only one depending on those factors, and in my experience then green, then oolong, then pu'er in order of increased tea output from tea type, but others might contest that since all the different factors tend to mix.


Good answer!  Always best to not actually answer the question.  From here on, and prior, I'll be citing references about Western brewing, and won't really get into gongfu technique.  Those infusion times are much shorter.  Sometimes 30 seconds is used as a base-time, adding length of time subsequently per preference and tea type, or even shorter times could be used.


Note the link goes to the group, not the discussion, since it's a private group (but you could join it, just explain to them that you have an unusual level of interest in tea).

That said a tea brewing times table isn't really valid, as the other discussion responses generally agreed, in addition to other factors relating (eg. "green" tea isn't all one thing; it really might make sense to brew different teas of the same type different ways, especially for tea types that varies a good bit).  All the same, back to seeing where standard tables do lead.


This table is a nice looking graphic, reasonable enough content, although taken from a blog not really focused only on tea (a food blog, "fine dining lovers").  Why even cite it then, right?  I guess for comparison, and it shows one more type of reference out there.


By now I'm getting familiar with the expression "for the perfect cup of tea."  I wrote a post about an article on it not long ago, and I've seen other references since.


The two references are actually not that far from each other.  Darjeeling is a bit off, with temperature and brewing time varying a lot for both, but then identifying Darjeeling as just one type of tea is already a mistake (even more than for the others, maybe, but I did just see a table about brewing different types of Japanese teas differently, possibly related to this blog site).  Darjeeling can be prepared as white, green, or black tea (or even oolong), and these categories seem to tend to mix a bit, to me.  Darjeelings from the different seasons (flushes) are different, and surely there are other variables.


Both tables agree on really short brewing time for white teas, expressed as a broader range than for most, and oddly I'm with them on that, it varies even more than for other tea types related to what you want out of your white tea.  Of course this doesn't speak to the longer times some white tea makers recommend.

One more quick tangent, related to a point about this in a recent post of this blog about a white tea::


Second infusion I brewed longer to see how that changed results,  since it's common to see that advised for white teas.  The character of a tea can change over infusions so really separating out the two effects would require making the tea again.


I did this on purpose this time (really!) since sometimes it seems a light-brewed tea can actually help subtle elements stand out, or maybe that just seems so to me.  Brewing longer allows a white tea to reach a more conventional flavor strength but some subtlety might get lost, so in the end the best way is subjective, however you like.

If the point were only to show that there are different standards being recommended as starting points I'd already be there.  But why not go on to see what tea makers recommend, to look a little closer at some of these numbers.

On the right is Teavana's online page reference for brewing guidelines (and obviously they'll recommend adjusting for preference).  Some differences:


-white tea is back to the longer recommended time I'm typically seeing from vendors, with the temperature consistent across the different references


-green tea brewing time recommendation has dropped way down to a minute or less, without differentiation within the range of green teas


-everyone is ok with brewing oolong for 3 minutes


-black tea is back to a standard range, allowing for a shorter time of 2 minutes, with their temperature range dipping below the others.  Some people consistently recommend brewing black teas at boiling point but in general I do like results for a bit below for a lot of black tea types. 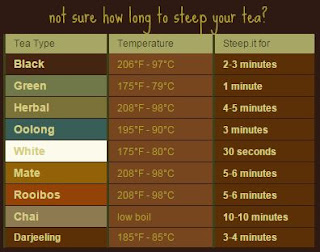 Getting back to the idea of timing support, a simple on-line timer allows you to set the time in a window, offering these guidelines (Steep It).


It's hard to imagine not using a phone-based application for something like this but I guess there must be some reason why it would come in handy, like if you lose your phone.  Some of these parameters are close to the others, some are way off, like green tea dropping to one minute (a bit short, that, for Western style), or white down to 30 seconds.  And I've seen chai references that say to boil the tea, then let it sit, then reboil, but I'm still working on my chai basics.

Had enough of the tables yet?  One last check on what Twinings suggests, since their sand timers did seem a bit off: 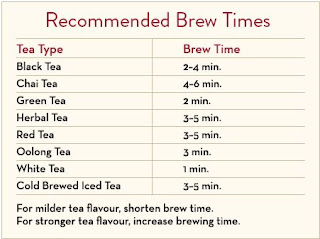 Note this page again references a "perfect cup of tea."  Probably better for them to not go there...


And they say for temperature just use boiling point water to brew all of them.  Noooo!!!!!


Aside from those horrors, and white tea again a bit low (1 minute), the times are ok.  (cold brewed iced tea in 5 minutes?  whatever).


It doesn't match my sand timer "settings" at all; not sure how that came about.

My kids will love playing with this timer.