I recently tried two different dark-roasted oolongs from Thailand.  It seemed at least initially possible that both are the same tea, but more on that to follow.  I should start by saying I've been happy to find better and more interesting Thai teas lately, and that I liked these.

It seems a bit bizarre to review the two teas together, as if identical, but I did find both to be very similar.  Both were sold as relatively inexpensive teas, not intended as the highest grade of tea either vendor was offering, but the style was one of particular interest to me, a darker roasted oolong.

The only other darker roasted oolong I'd tried from Thailand was actually awful, so bad I couldn't drink it, and I felt apprehension about giving it away for free.  But I don't discourage so easily, and you can't judge a tea type by one tea.  I've tried nice versions of lightly oxidized Thai oolong (many), and also black and green teas (less of those), so finding a decent darker oolong had to be possible.


Maybe as well to begin with reference to the two vendors and their write-ups:

Description of vendor (my own):  an online mail-order Thai tea vendor, seemingly set up for wholesale quantity distribution (pound / kilogram) more than small-order retail sales, but they seem flexible, and probably accustomed to overseas sales.  I wasn't familiar with there being a Thai organic certification system but they list limited details about it, so there is.

Description: sold as a darker roasted oolong, without extensive flavor profile description, or really even a cultivar listing (almost surely Jin Xuan; most Thai tea is, and as an easy to produce high-production volume cultivar it's what inexpensive teas here tend to be).


Vendor description:  I've went on and on about their other teas already, last about a nice Thai version of Oriental Beauty here, and in other posts.  I've really liked a lot of the teas from them but of course the nice thing about a physical shop is you can try the tea before you buy it (if they let you, as they do there), unless you aren't actually visiting the store, in which case of course you can't.


It is unusual both vendors mix references to black teas with oolong descriptions (one cited black and the other red; but it's the same thing, since red tea is a literal translation of the name for black tea from Chinese).  But it's clear what both are anyway; relatively more oxidized oolongs, teas that are still less oxidized than black teas.  I'm not trained to judge the percentage but the 50% value assigned by the Fine Thai Teas oolong seems about right; not the darkest oolongs I've tried but far from green, a nice level if the tea taste and character works out.


I liked both teas, and both seemed really similar, only slightly different.  One was sold as organic, and the other not (not specified anyway), and the taste only varied a little. 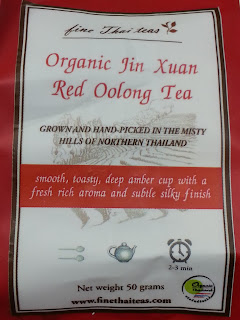 Organic versus non-organic is not a trivial matter given how much tea I drink, although I suppose I am skeptical of the use of different such labels, especially in this part of the world (organic, fair trade, etc.).  Of course one would hope it corresponds to use of less chemicals but hearsay about limitations of certifications in general here isn't positive.


Both had a rich dark-wood earthy taste.  Both had a nice clean flavor profile, not the fullest body or most pronounced aftertaste of other types of darker roasted oolongs, but these were decent teas, no negative flavor elements at all, and essentially no astringency.  Both had a cinnamon component, more pronounced in the Fine Thai Teas version, so that tea could seem better to someone that likes such a taste element (and cinnamon and cocoa are two of my favorites, and malt, but that gets more complicated).  If you bought them as a high grade of tea they wouldn't seem exceptional; if you bought them as ordinary grade tea they might.


You absolutely could not walk into a grocery store and buy tea like this in Thailand, or maybe even in a tea shop.  In America I'd guess even decent lightly oxidized Jin Xuan oolong isn't sitting around lots of places, in decent tea shops of course it would be, from either Thailand or Taiwan, and of course it does turn up here since it's the main tea type they make.


This still doesn't seem like a satisfying description, does it?  Two flavor elements spelled out, not so much about body, or sweetness.  I did really like the teas; both just lacked the same degree of complexity and finesse I've been spoiled by from nice Da Hong Pao, Rou Gui, and Shui Xian teas lately, which to be fair were sold as different and higher grades of tea.


﻿
The wood tone and roasted flavor might have hinted a little towards toffee, and one could stretch their imagination towards some fruit component, maybe a hint of cherry, or different brewing made the wood tones seem more like leather (not a bad thing), but the teas just weren't that complex.  To me cinnamon, wood, proper sweetness, decent feel, and clean flavors are a great start though, and for an inexpensive tea not a bad place to leave off.


I'm reminded of a Google + post comments discussion about people drinking good tea or ordinary grade tea as an introduction (the background was discussion of a study claiming that people don't prefer more extensive wine, which was probably due to selection of specific wines that lead to that outcome rather than to any meaningful tendency).

Organoleptics take time to develop, however not sure why that means people should drink boring one-dimensional substances until they have a "palate".


Hard to disagree, right.  But what does that mean?  About wine, maybe that better wines that match one's preference are still better suited to appreciation and further developing preferences than box-wine that happens to be light and sweet and acceptable to someone that doesn't really drink much wine.  But we were talking about tea, so maybe a similar point; just because someone can't fully appreciate all the aspects of better teas at first they needn't stick to mediocre tea.  It could be informative to start back at what I said in writing the original post:


I don't think it's correct to just write this type of article off as being wrong; there is something to preference changes related to experience, so wine beginners should probably start with mild and sweet Merlot, or Zin, whatever.  As for tea, maybe that equates to Jin Xuan oolong or something such, I'm not so sure.


We're already well on the way to throwing dirt in the eye of that particular cultivar, right.  It doesn't need to be made into cheap, one-dimensional tea, but at the same time I've drank it as inexpensive tea more often than as mid-range, and have never heard of a higher-end Jin Xuan product.  To be honest I've had more impressive Jin Xuan cultivar based teas from Taiwan than from Thailand, although some from here were more notable for the light, sweet, buttery flavor profile, which is nice in it's own right.  But was it ever multi-dimensional?


I said "I'm not sure" because I'm not (really about the point of what makes for a good "beginner tea," since the point about tea having dimensions was the response, but along the same line as evaluating cultivars).  Related to the most typical teas produced I've had better lightly oxidized Tie Kuan Yin, based on my preferences.  I must admit I liked the similar Red Buffalo oolong from Vietnam better than these (from Hatvala, written up here, and website here), but that's not really a fair comparison because that was one of my favorite teas I've yet to try, and from a different country and tea cultivar.  It doesn't seem right to dislike a tea just because of trying a better similar version from elsewhere, but eventually I guess one could naturally move on to only drinking the better versions and leave some diversity out of it.

A similar point about diversity in grade in a tea type came up in the post about Shui Xian, about how the tea is known for production as restaurant tea, a relatively low grade, but how the plant type has the potential for production to a very good tea.

To me these two darker Thai oolongs are not boring or one-dimensional teas, not "bad tea," but I would prefer a decent Da Hong Pao over them (which I suppose relates to personal preferences as much as an objective evaluation of the teas).  But then such a tea would cost significantly more, and it is a different type of tea, with some commonality related to general flavor profile and oxidation level but different in many other ways.  I would recommend anyone newer to tea to try these two teas if they have a chance, and would guess that many experienced tea drinkers would also enjoy them.  They would probably also notice limitations in complexity, and the teas probably wouldn't be ideal for palate training, whatever that is.  Per my wine guru I probably wasn't the most trainable acolyte, and of course I can't assess my competency in tea tasting, and I'm not currently on a training track to sommelier status.

A comment on the one site mentioned the tea would be good for blending, and I can see how it might, but I'd expect combination with another a black tea with more astringency might work better for blends with other ingredients.  Astringency isn't one of my favorite components in teas in general but it can play a role in establishing a complex profile, and blends involving fruit or floral elements could benefit from that, along with the earthiness and richness of this flavor profile.  For drinking as a single-type tea I'd much rather have this tea than a more typical black tea, but then I've tried a lot of black teas from different places that had interesting complexity and great flavor profiles without much astringency, even sold as different grades and at different costs, a number of them reviewed in different posts here.

Both teas were a good value, although of course that depends on someone liking the tea.  I could imagine this type of tea not appealing to some based on preferences, or instead opening a new world of types of teas to others.  Some might reasonably dispute there is such a thing but they seemed an excellent "beginners tea."
Posted by John B at 8:46 PM