Tea made from coffee leaves! Review of Wize Monkey tisane 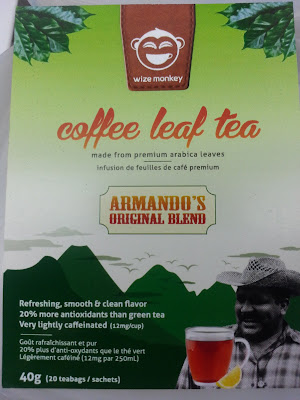 I recently tried an usual product leading to my first review of a tisane here (herb tea to most, but not a word that tea enthusiasts prefer to share).  It's a "tea" made from coffee leaves, from Wize Monkey, who provided the samples.


A first thought might be "why did they do that?"  Per the marketing content the brewed tisane has more antioxidants than tea made from a tea plant (hard to say about that; even with research support it would be hard to say), and is low in caffeine, but it does have some.

Some background echoes free-trade concerns related to other products:  it allows for agricultural production outside the limited time-period of coffee bean harvesting.  For many the final product taste would cover if making or drinking it is justified or not. 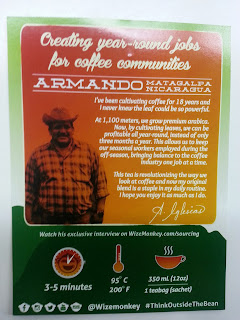 The brewed "tea" tastes like a tisane, but it's hard to compare to which, or describe it.  The flavor is pleasant, and smooth, a bit rich, and not really close to tea made from tea.  From the taste it seems like it is a roasted product, not just a dried green leaf, but what little is on the website implies it is just dried coffee plant leaves.


One taste element might be similar to "malt" described in other tea, just not the same.  Think chamomile, but with more going on.  It really it doesn't exhibit the same complexity some better teas do, so it's not as if there are a lot of different flavor elements to describe, but then teas from tea plants vary related to that.  The taste is distinctive and pleasant, just not exactly familiar.  It has a strong aftertaste, one might describe as "finish," a property common to tea, positive since the related flavor is good, and no astringency / bitterness. 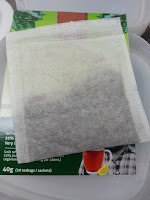 There is a primary flavor element I can't identify, something unfamiliar, which makes it harder to sort out other flavors.  Of course some reviews do just that, which I cite a bit on later.  I guess to me it tasted a bit like caramel and some type of nut, towards the rich and relatively neutral flavor of a brazil nut.


To evaluate related to my own preference, leaving aside bias towards tea, it's possibly comparable to a mid-range tea.  There isn't a lot of complexity, and the flavor is nice, the body or feel of the tea pleasant.  Of course some of this is subjective.  For someone without the bias towards tea made from tea plants it might come across even more positively.


I also tried an "Earl Grey" version, which was kind of interesting, trying an herb made in that style.  I liked it.  The herb is fine on it's own, with a full flavor, so it would come down to preference if a hint of citrus was really an improvement or not.  It took me half a cup to divorce my expectation of the black tea component from drinking it, the normal Earl Grey association, but I could still enjoy it prior to making the break.


I recently evaluated Thai dark oolongs that were nice and had some similar questions, about who the tea would appeal to.  Those teas were better than any most people would ever be exposed to shopping for tea in grocery stores, commercial teas, but perhaps not as good as many that people routinely seeking out loose teas would try to obtain.  I would rate this as roughly on the same level. 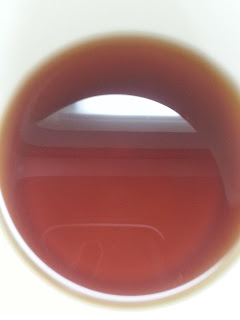 For the sake of variety I would think tea drinkers might still want to buy and drink those oolongs, or it's possible someone's preferences would evaluate them much more positively than my own, but in this case the product isn't going to automatically appeal to tea drinkers by virtue of being tea.  Of course now I'm mixing concerns of product review based on characteristics and marketing, really two different things.


I wanted to add a bit more about the product, per the usual approach, just a bit different in this case.  Others gave their opinion of it on Steepster:

Interesting reviews from both of those, generally positive, but the flavor references are more about how the taste isn't so easy to describe.  The first says it "tastes exactly like the way Vitex smells... The finish is wildflower honey sweet with a hint of straw" and the second compares it to guayusa, another type of herb (more on that here).


So the consensus is that it has a nice taste, smooth, rich, enjoyable and a bit earthy, and an unfamilar one.


I couldn't help but wonder if the coffee leaf doesn't have more potential than this; if this is as far as it could go.  Tea enthusiasts are familiar with discussion of lots of variables that affect the final tea beverage:  terroir (soil, environment, etc.), cultivar (plant type), harvesting details (timing, seasonal periods, related weather, leaf selection, etc.), and a vast multitude of processing categories and details, and even after storage and brewing concerns, it just goes on and on.


They've made it good; could they make it great?  Is it even possible to prepare it in a way comparable to a more roasted oolong, or push oxidation out to similar to a black tea?  I have no idea.  Here in Thailand they are still working on learning from other regions' processing of the same tea plant, still preparing different styles, or improving what they have been making, this after 20 or so years of production.  This may only be the beginning for coffee leaf "tea."