I checked out a new tea shop and an interesting tea, a Keemun from Peony shop in Silom (Facebook page and related website, which includes a Thai language tea blog about tea basics).

Luckily my wife doesn't read this blog because I still have teas from my last two purchases I've not tried yet, and a few other samples around, but I ran across mention of this shop near my office, so what could I do.

They have a nice selection of single teas and blends (maybe half and half), but at first I was disappointed because I've tried all the types they carry, maybe around 20 single-origin teas.  Some other favorites were there, Lapsang Souchong, Thai oolongs, Tie Kuan Yin, a Bai Mu Dan, a couple nice looking Darjeelings, but I've been drinking all that.  It almost seemed time to start into blends (mint with tea, flowers with tea, etc.) but I smelled the sample tins to see which I might like and the Keemun stood out, sweet and rich.  And it's a tea type I might have only tried a couple times. 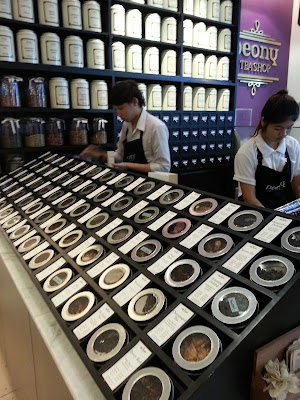 
Straight to it then!  I was immediately struck by a nice, sweet fruity flavor, one element reminding me of grape.  Not like grapes usually taste now, I mean concord grape, like Welch's juice.  Which reminds me of eating them from a vine at my great-grandfather's house as a child, growing near a pear tree as I recall.  It was a bit similar to the "wow!" you can get from a nice Darjeeling, and a generally related flavor profile, just not exactly the same.  Another predominant taste was non-distinct stone fruit, maybe plum, with additional mild floral tones. 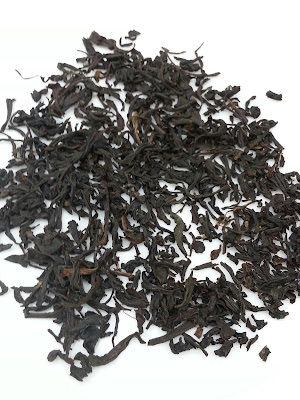 The flavor profile and feel of the tea were really nice.  Beyond the fruit elements there was a nice underlying earthy tone, malt mixed with a light and subtle wood tone.


To be honest these flavors most people would generally describe as "tasting like tea," since that general "malt" range is common in other black teas that would be familiar, Assam and Ceylon.


In some Chinese black teas the flavors don't always balance in a way that is pleasant, with sweetness  coming across in a way that isn't completely positive (to me), but altogether this tea really worked, nice and pleasant and clean. 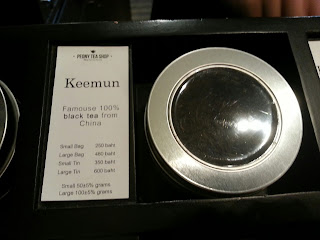 There was a bit of astringency but it was still a relatively mild tea, so not as soft as the various roasted oolongs I've been drinking, but far from bitter.  There was just enough astringency to give the tea a nice feel to it, but not at all "brisk," which to most would probably be a good thing.


About the shop, I might also mention it was both a loose tea sales shop and a cafe.  For me I'd just as soon take the tea and go but it does make for a nice alternative to coffee shops. 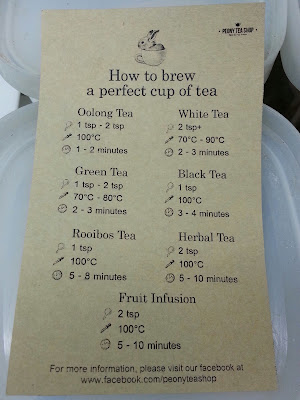 They included a recommended brewing instructions card, not bad as these go.  I wrote a recent blog post about how these can vary, and the limitations of advising any one set of instructions.  Based on that research and my own experience these would work as a starting point, it's just not quite that simple.

Without water quantity this is incomplete, and it doesn't address re-brewing multiple infusions (any of the teas would make at least two cups of tea, maybe three or more depending on the tea), but again some of all that depends on preference.


I generally brew black tea at slightly below boiling point for the first two infusions (varying all the brewing process by specific black tea type), and switch to full boiling temperature for the third, but then nobody does that (that I've read of), so what do I know.

I've tried this tea type before but haven't written it up as a blog post, so I'll add a bit more about it.

It doesn't make for great looking research effort but the Wikipedia article usually isn't a bad place to start, just as well to keep in mind those can be biased or incomplete.  That description mentioned unsweetened cocoa is another common flavor element, and of course thinking that and trying the tea again lets me "get it," but the taste is complex enough it can be hard to separate out all the components.  There's a floral tone (at least one) someone with a more amazing palate might describe in more detail, and also a trace of a mineral element component.


A Teavivre vendor reference goes into more detail about the type, the character and the story of the tea, which they describe as one of China's ten most famous teas:


first produced in the year 1875 after a man named Yu Ganchen traveled to the Fujian Province of China so that he could become privy to the secrets of quality black tea production because prior to that time, the Anhui Province had only produced green teas.  What he learned ... enabled him to produce the world's first Keemun black tea, ... [which] has since become one of the primary teas included in English Breakfast tea blends.


They recommend brewing the tea at 90 degrees Celcius, for what that's worth (194 F).  Related to storage (a subject they mention) the shop sells the tea in the typical plastic / foil layered and self-sealing bags designed for tea.


A non-vendor reference, Wiki-tea, gives an interesting description of the typical taste profile:


The aroma of Keemun is fruity, with hints of pine, dried plum and floweriness (but not at all as floral as Darjeeling tea) which creates the very distinctive and balanced taste. It also displays a hint of orchid fragrance and the so-called 'China tea sweetness.'


They also mention four different more specific types of Keemun, and one related additional type.  As usual trying one decent version of a tea is really just a starting point.


Another Tea Guardian general reference is worth a read for similar descriptions of the tea type, and also more about "English Breakfast" tea:


“English Breakfast” is actually the name of a blend first used by a retailer in New York in 1843, before Keemun black tea appeared in 1875. It was a Mr Richard Davies of “Canton Tea Company” on Chatham Street.... Davis added touches of pekoe (a name for tippy flowery black teas back then) and Pouchong (a Taiwan oolong) to a base of gongfu black tea, and it instantly became a hit. Today different companies have their own blend formulas for it...  However, most better ones use broken grade Keemun as the base.


Beyond that lots of vendors have lots to say about the tea type but it starts to repeat.  Oddly there is a Facebook group just about this type:  https://www.facebook.com/keemunblacktea.  Or maybe that's not odd; I just checked and there are supposed to be 54 million pages now, apparently in addition to the 1.3 billion users.