I just tried a nice dark roasted oolong at a newish Bangkok tea shop, Peace Oriental tea house.  I'll cut the research and background section a bit short for this since there's already plenty to say about the shop and the tea, but there is an interesting back-story to the tea I'll start with.

What is Jin Guan Yin

At the shop one of the owners said it's a Wuyi Yancha, or rock oolong (nothing so relevant about this particular tea in this general category reference, but it's still interesting).  Fair enough.  One might reasonably assume that this was simply one of the other Chinese names for types of Wuyi Yanchas I had forgotten, but it turns out to not be so, with a closer tie to Tie Guan Yin, as the name implies.  Of course the cultivar type doesn't necessarily tell you how it is processed, there would just be a most typical style.  And different tea plants can be grown in different places, not necessarily just at the Wuyi mountain, although growing location would affect the tea (the terroir idea).
Different sources say slightly different things, but essentially it's a relatively newer hybrid, "a cultivar that is a cross between Tie Guan Yin and Huangjin Gui," per this Tea Guardian reference.   One other vendor reference seems to contradict that slightly, claiming it's not a conventional hybrid (cross breed of two plant types), but rather a plant that is created by grafting the two plant types.
Reminds one of grapes cultivation practices, right?  Unless I'm completely wrong--which really could be the case--the idea is that certain plant types produce better fruit (or in this case, tea leaves), but that root disease resistance also varies by plant type, and it's possible to get the best of both by literally combining two different plants into one.  Seems strange for someone to use "literally" to mean something other than "figuratively" now, right?
It's interesting to consider how the tea is "supposed to taste" (of course with variation by lots of factors, so always taken with a grain of salt).  The Chinese Tea Company source describes that as:
has a savoury scent of roasted vegetables, salted nuts and raisins. Wuyi Jin Guan Yun tastes less smoky than most Wuyi oolongs, but it has a rich mineral character and a mild sweetness of cooked fruits.
That part about being smoky, seemingly what others typically refer to as char, would seem to relate to processing inputs, not the original plant character.  The Tea Guardian source describe the same "should taste like" aspect as:
Fresh batches should not smell plumy though, but rather the Minhong type fruity floral and malty, almost cookie type of aroma in the dry leaves.
Right, like a cookie.  Hopefully like an oatmeal cookie; those are nice.
Maybe more interesting is that different sources describe it processed as a typical more-roasted oolong, that looks like a Wuyi Yancha, with the dark twisted leaves, or else as a typical lightly oxidized oolong, even rolled into balls, or even as a black tea.  Of course I've tried the same tea plants processed into different teas before, so nothing necessarily wrong with all that, although it does seem possible the one vendor just got the tea description completely wrong in the last case.  The one I tried was darker oolong, still medium in oxidation level, if that makes sense, with the typical twisted leaf appearance and malty / roasted smell.  On to what the tea was like then.

Tea shop experience and about the tea 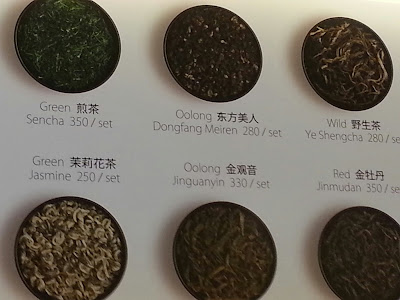 The shop seemed a little barren, in a post-modern meets zen tea house sense.  It looks like the well lit clothing stores in a mall, lots of wood panels and soft whites, but still a bit cold.
No sign of food, a limited menu on the wall, with pictures,  not much else.  Sitting at a small table on a cushion would make sense in Japan,  but isn't familiar in Thailand, except in Japanese restaurants here.  There is teaware on shelves on a wall back near a small tea bar, which of course they sell.
As might occur in a high end Bangkok mall I had some sticker shock to overcome prior to enjoying any tea.  Mid-range teas cost around 300 baht per teapot (US $10), with the "Legendaries" section--eg. Rou Gui--at double that, 650 / $20+.  Even for ordering the less expensive tea it's as well my wife doesn't read this blog.
There is a Buddha on a high shelf.  That's not common here in Thailand.  Chinese people put different small shrines in businesses, and spirit houses outside, quite literally a place for local spirits to live, but Thais would ordinarily only put the Buddha statue in a separate prayer room in the home.  It's not a violation of Thai culture, as wearing a Buddha image on a t-shirt sort of is, but not typical.
The server presented the tea in a small pot, along with a large thermous, and gave it an initial rinse without asking.  Of course that seemed odd, really a judgment call, but I'll not dwell on it here. 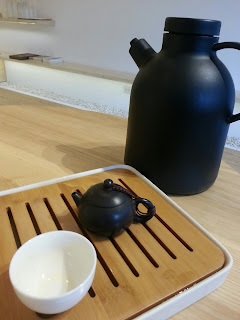 He helped brew the first infusion as well, a short one, explaining they recommended three infusions brewed at around 8 seconds, then longer to preference, with the water temperature at 90 C (that part wasn't variable; the thermos was already there).
The brewed tea itself had a great smell, roasted malty tones, caramel,  fruit components not so easy to separate, but one could imagine the dozen-component review one sees actually making sense.  Maybe a little plum as a front note, not so much wood as in some roasted oolongs, with a great floral scent and trace of unusual spice I've experienced in a rou gui before.  The roast was definitely medium, not light as in other oolong types, but without any char effect darker roasts can lead to.
The second infusion I brewed for about that long, maybe a couple extra seconds before I finished pouring it out, still slightly stronger.  The sweet and subtle plum element transitioned to a stronger earthier flavor, towards a light wood, as usual as one would imagine mahogany brewing (or something such; people don't really brew or eat wood).  A bit of spice kicks in as the sweet and fruitiness transitions, something like cardamon,  but only a trace. 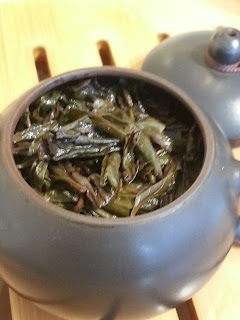 I brewed the third infusion quickly, maybe only 6 seconds,  to see what that slightly longer brewing time changed before the flavors shifted further.  The third infusion was slightly better weaker, subtle, but it allowed the sweetness to shine, back to more plum and less wood.
When I tried a better rou gui in the past I couldn't capture one flavor component, likely floral, but an unfamiliar version of it, and possibly a different scent altogether, some obscure sweet herb, a scent like perfume.  There is something similar and unfamiliar in this tea.
The fourth infusion is not transitioning much but the flavor is lightening.  I get the impression it will fade to earthier as I brew longer to keep going, but I'll see.
The tea is nice.  But maybe I'm just not used to tea shops, and would prefer something homier, as we saw in Seoul on the last visit, real wood-paneled environments with a different feel to them.  I'm sure some people would feel very at home here, Thais raised in high end malls. 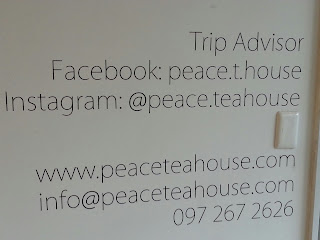 Brewing the next infusion a little longer did work out well.  It's reminding me a little of sassafras now, from a distant memory of playing with plants, not from actually trying a tea made from those roots.  I guess saying that I grew up in the country, in a rural area, sort of doesn't completely explain that.  I suppose I might have just been a strange kid, but smelling random plants and damming up streams and all the rest seemed natural enough then.  When hiking in Colorado as an adult that transitioned to huffing on crushed sage leaves and pine needles while hiking.   Maybe it was something like that all along, sasafrass, but more pronounced now, so easier to pick out. 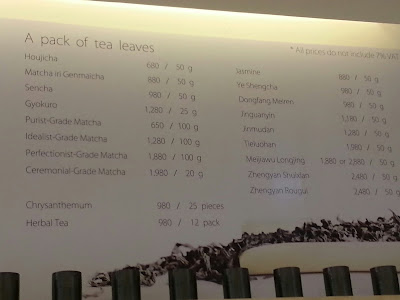 I eventually lost track of infusions.  That sweet herbal note stayed pronounced due to using longer brewing times, and the tea kept going, but the complexity diminished.

More about the shop

According to one of the owners about the decoration and shop concept was supposed to be a neutral Oriental environment, not Japanese, as it sort of came across.  The tea theme changes over time, in the first "menu" more Japanese, now shifted to Chinese oolongs, with the exception of a matcha section.  Of course all the teas are farm-sourced by them (high quality, organic, hand crafted, etc.).  That tea was pretty good; definitely not just hype.
They also sold loose teas; "take away."  The cost of around 1000 baht / $30 US per 50 grams might well have been justified by the quality but I didn't buy any.  Since I keep trying samples from different places, and have other tea source options in China to get to ordering from, it's normal for me to pass on the full-retail purchases like that, but for Bangkok upper-middle-class that should seem reasonable.  From my limited experiences with buying tea in China you really do tend to pay for better grades there, too.  For me it's nice to keep trying different teas rather than just drink the best of what I like so really nice to have tried this one.
Posted by John B at 4:08 AM