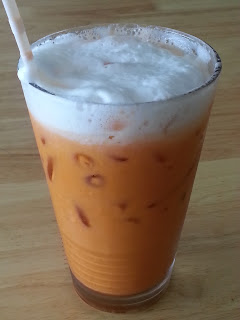 It tastes like Thai tea. I'm not sure what that's coming from or how to describe it. This one wasn't from a powder, as they sometimes are.  The server in the gallery brewed it from well chopped loose tea in an espresso machine, so it was a real frothed iced latte. I would expect a little astringency, even with milk and sugar, but it has none. And I'm also not sure why it's orange.  The tea was served iced, of course; I've never heard of anyone drinking a hot version.
Maybe the distinctive taste is in my mind, assumed from the color, but I don't think so.  It should be some herb but it's nothing I can identify.  I think the powdered versions would usually be a lot stronger and sweeter, and the Thai tea bag versions more typical of black tea (the kind brewed in a strainer that looks like a small version of a weather sock), with astringency showing through milk and sugar no matter how sweet it was.
Seems I should be able to say something.  It was good.  If that taste is from an extra herb it's subtle. The Bridge art gallery in Sathorn (Bangkok) that I had the tea in is nice; lots of space here.  The current artwork is abstract, by a local Thai artist, a younger woman, but with a gallery show resume posted about her work on the one wall, so not new to creating art.  I guess I liked it, the art, not really one of my things though.  Tea is, hence this blog.
They also serve a tea-bag version of tea from England, Clipper brand.  It's likely a little better than what grocery stores are stocking here, on par with the tea in better hotels, but then I'd have to try it to know.  Eventually I should give them some loose tea to get them thinking along that line.  It's really too cool a place for tea-bag tea; even Thai oolong would fall short. 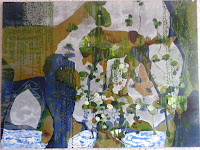 The gallery covers a number of different levels, separate floors, so lots of space.  This artist had around twenty pieces displayed to fill the space, a number of them very large, but the gallery could hold a lot of art.  The space is strange, broken into small, odd-shaped rooms on different levels, with a bar of some sort on the roof-top that was closed.  I liked it. 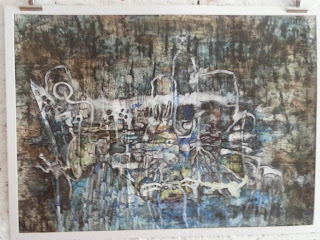 There was unfamiliar, interesting music playing on a good sound system while I was in there, perhaps not that unusual a thing, but great for a nice background vibe.  The woman working there was really nice, one of the owners.  She was shy about being photographed for this post, so her input was limited to talking about the gallery, and tea, and the local landmark nearby (her English was quite good).
It's not really part of the gallery but there is a large abandoned tower right beside it, almost standing over it.  Bangkok is strange for having a lot of abandoned, mostly finished buildings around  It looks like the whole structure was completed in that one, as if they were so close to finishing it, but apparently bankruptcy laws aren't set up effectively for recovering that progress in the cases when the money just runs out.
There are different blogs and article posts claiming you can enter and climb the stairs inside to get a really unique look at this part of the city but they're inconsistent about how that works, if it's really open to the public or if some version of paying off a security guard is involved.  Here is a newspaper article with background on the tower, with a video section included, and also a blog post version about going up in it, a bit more colorful.  It doesn't sound safe to visit; surely part of the appeal.

The references to the traditional version of this type of tea aren't consistent.  Almost all claim the color relates to food coloring, with limited speculation about a historical version that might have somehow been orange without it.  There's no consensus for ingredients but most claim either Ceylon or Assam tea is typically used, along with condensed milk and a good bit of sugar, and maybe other herbs.  Orange blossom and crushed tamarind seeds seem to be potential traditional additions, and other versions reference possibly adding anise, cloves, or cardamom (so masala chai without the ginger, essentially).
Here is one "how-to" article describing that, and how to make the tea, and a blog post that is essentially the same content (but you never know, maybe a slight variation would help fine-tune how it turns out). 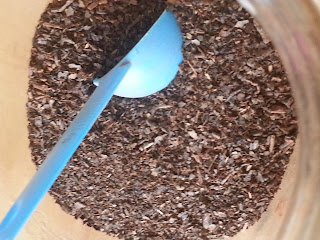 I couldn't say if that tea really did taste a little like orange blossom or tamarind seed; as far as I know I've never tried either.  They sound great; I'll keep my eyes open for them.  It looked a good bit like a normal CTC / machine processed tea, maybe just a little more like a rough ground sawdust than tea usually does, so there could've been something else in it.  Or maybe just more sticks than I'm used to, which wouldn't always be so negative, sort of a hojicha twist to a Thai tea.
The related Wikipedia article includes another interesting reference to tea type used:
However, due to Ceylon tea's high price, a locally grown landrace (traditional or semi-wild) version of Assam known as Bai Miang (ใบเมี่ยง)[1] with added food coloring is commonly used. Other ingredients may include added orange blossom water, star anise, crushed tamarind seed or red and yellow food coloring, and sometimes other spices as well.
The source cited by that article fills in a bit more about that tea type, along with explaining the standard distinction between the two general plant types, which I've left out here (the other is Chinese tea, camellia sinensis var. sinensis, versus var. assamica, more commonly grown in India):
The Assam variety is also called landrace, wild, or Miang tea.  Leaves of the Assam tea are larger than those of the Chinese variety.  Assam can also grow readily in the shade provided by forest.
So again the new part is that this tea plant might somehow be "semi-wild."  That would be great, to go hiking in the jungle and pick some, as with blackberries back in the States, or strawberry guava on ridgeline hikes in Hawaii (which are amazing, by the way).  That article goes on to talk about all the types of teas produced in Thailand, and cite import and export quantities, consumption per capita, etc., which I guess could be of interest to some.  It claims Thais consume .09 kilograms of tea per person per year (published in 2009; maybe they've stepped that up), which is not very much tea, just shy of 100 grams.  I drink that in a couple weeks.
One curious part of that passage talks about making "Miang," clearly referring to a food dish made from tea, not a drink.  One gets used to words being used in different ways here, not so different than in English speaking countries, but it makes more sense when you don't notice it happening.
Miang has a tart to sour taste.  Miang  is mainly consumed in the north of Thailand.  It is eaten as a snack during work for alertness.
Sounds like lahpet, pickled tea from Myanmar, right?  Must be related, but no need to dwell on that since this part is all just a tangent.
I'm happy to have had a positive experience with traditional Thai tea, and the gallery part was really nice.  Maybe on to bubble tea next time.
Posted by John B at 2:09 AM