An online contact posted about a great looking tea from an interesting shop in Chinatown, which I bought recently.  It's a Wuyi Yancha, my favorite general type so far, but a good bit different than the others I've tried:  Da Hong Pao, Rou Gui, Shui Xian, Shui Jin Gui, and Jin Guan Yin (I'll spare you most of the links, those might already be familiar, but Jin Guan Yin might not ring a bell). 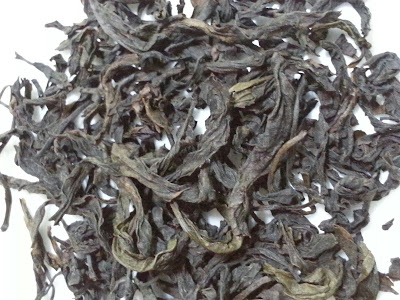 I bought the tea from the Jip Eu tea shop (FB page link).  It's on a street off the main part of Yaowarat, the road with the classic sign look, much like Kowloon in Hong Kong.  It looked like a Chinatown tea shop should, on the small side, nothing too fancy, just lots of teas on basic shelves, more in packages than loose tea.  They had prepared the tea I bought earlier as a sealed separate package, to avoid the issue of opening and closing larger containers along with related air exposure.


As I walked in another customer was buying lower grade Shui Xian in significant bulk, maybe a kilo of tea, which I found was selling for very little (something like 150 baht / $5 for a good bit of tea--next to nothing).  I tried that tea they had brewed but it was ordinary grade tea, nothing too interesting, which I wasn't really there for.


I asked for this tea, Ban Tian Yao, and the shop employee, the owner's wife, seemed a bit surprised someone unfamiliar would ask for it.  She said it one regular customers further along into tea preferences would know about and ask for.  She explained why the pricing was so much higher than some other types, all of which is familiar enough territory; they don't make lots of better teas.  Apparently beyond that this tea type you just don't come by frequently.

You might think it would be easy to find such places in Chinatown, that traditional style tea shops would be all over the place, and in fact I walked by another getting there.  It's hard to know what is what though related to shops, without significant online presence to indicate that in advance, and the shops I've seen in the main part of Chinatown are more street-stall style, selling more bulk teas not really stored well for maintaining them, in large jars, or even exposed to air in open bins (crazy!).


The tea looked and smelled like a darker version of a Wuyi Yancha than I've tried, a very dark roast, but with inconsistent coloring in the leaves.  The smell was distinctive but unfamiliar, wood and leather, a pleasant sweetness, but another element was harder to place, mineral in nature.

As I brewed cup after cup of the tea in a gaiwan--still not into the clay pots yet; feel free to stop reading this if it makes that much difference to you--the nature of that one element became clear, although still hard to describe.  Most of the flavor profile was like other darker / more oxidized Wuyi Yanchas I've tried, perhaps not as wood and leather related as Da Hong Pao tends to be or aromatic as Rui Gui. That one flavor element was something novel, integrated with the other profile, but distinct.  I'll come right out with it:  it tasted like ink, or at least like ink smells.

It's always a bit strange when flavor elements relate to things that aren't foods, when one struggles to compare a tea to rocks or wood, never mind flowers, but no one ever drinks ink, so maybe that's not exactly it.  I've tried the version squid produced, sharing the same name--squid ink--typically used in a pasta sauce, and it must share some flavor with what comes out of pens, but surely is quite different.  Some of the same wood / leather / earth tones were present, and aromatic elements that were hard to place, and that one component was related to the dark roasted nature enough that it could've been interpreted closer to charcoal, but it wasn't just char. 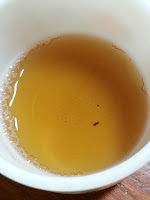 Of course the feel of the tea was also distinct, rich and smooth, with a little astringency to give it a different body than some softer Wuyi Yancha possess.  The tastes and feel did shift a bit over infusions, with wood elements picking up a little, and sweetness varying, so it started to trace a little towards caramel at one point (usually it's toffee, right, but the two are close enough).  Even given all that it was hard to get past that one novel element, which was interesting, just different. 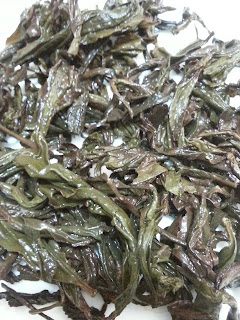 The second time I had the tea it seemed like maybe that one distinct element could be described better as tar, although hard to say if that related to me varying brewing or me getting my palate around an unfamiliar flavor element.  For a lot of people that might sound terrible, a tea tasting like tar, but it was nice, if not the most positive taste element I've ran across in a tea.


For an experienced wine drinker this might make perfect sense as a positive aspect, related to flavors found in Red Zinfandel.  That wine isn't the typical preference end-point for most experienced wine drinkers but a good middle ground for working through unusual flavors, odd fruity, jammy, and spicy wines, and some few might taste a little like tar.


An aromatic component seemed slightly stronger that second time too, reminding me of an experience found in some Rou Gui's.  It reminded me of someone recently saying that Darjeelings tasted like perfume to them, something I'd noted in a Rou Gui post here before.  I was using it as a positive description, but that person cited it as a reason for not drinking Darjeelings.  To me those generally seem a bit fruity (muscatel, right), often with a notable astringency (compared to Chinese black teas) that might either be positive or a deal-breaker depending on preferences.  The teas I've tried are still softer than what I've tried of Assam and Ceylon teas, which is a bit limited, if you don't count lower grade versions that can be a bit non-distinct.

I ran across an old blog post about this tea that didn't really ring any bells, and doesn't really have much description to cite, but it was interesting.  The idea of aging Wuyi Yancha to reduce the char taste came up, but I've been through all that in earlier posts.

One of my favorite bloggers, Amanda, reviewed a different version, with this description excerpt:

There are also notes of char, which moves on to a rich tobacco and molasses at the middle. The finish is cocoa and of course mineral which lingers for quite a while.


Of course I was already wondering if this tea wouldn't be different and better in a year or two, and this other tea's description reminded me of that, since it didn't seem to have the same degree of complexity in tastes, and was dominated by an element that may relate to the roasting influence that is said to dissipate later.

I didn't get far researching this tea; there are only vendor pages to review and the odd blog post.  One group buying site (?) said one version tasted typical for Da Hong Pao, like strawberries and chocolate (?).  TeaDB had a little, not much, so I'll add that and move on:


Ban Tian Yao (半天腰) is a Wuyi Oolong with complex flavors. Because this tea is traditionally roasted over charcoal it gets sometimes a light smoky taste. Ban Tian Yao means literally "Halfway to the Sky". The name is given due the fact that the tea is grown very high on the cliffs - halfway to the sky.


Getting past reviewing as a taste-by-taste description

When more experienced tea drinkers review teas they sometimes barely note the taste of the tea and move directly on to components that are a bit more subtle, mostly related to the feel of the tea, in terms that wouldn't be familiar to most, not so easy to express, and also about aftertaste and finish, and the way the tea makes you feel, qi.

This tea had a lot going on beyond the taste, and the initial review I mentioned was not related to flavors so much.  Of course it makes it hard for me to write about this related to a tea because these elements are less familiar and less open to description.  Really concepts start to fall short regardless of where one encounters them, no matter how they are structured.

I'll cite some of that original review reference, from a tea drinker much more experienced than myself, reviewed with his permission to reprint.  That person is JP Tan, active on Facebook tea groups, including the Cha You group, which I'll cite as the source for this.

半天妖, Ban Tian Yao is an old Wuyi tea. ...  Translated literally it means the Demonness from mid heaven.
The brew is dark but clear typical of charcoal roasted tea. The top notes perceptible as you pour the tea is one of the roast that the tea has undergone. Some would say like coffee. Soon floral notes takes over, notably light but heady.
On the palate, sweetness is more pronounced than bitterness. Characteristics of rock tea, the plum like sourness is tinged lightly on the sides of the tongue. All this soon gives way to the astringency that spreads all the way to the back of your throat. It dries to a lovely sweetness that envelopes your whole mouth and throat like a demoness weaving spells to tear your senses asunder. Then all of a sudden calmness prevail and you realise you are at sheer cliffs of Wuyi mountains. Herein lies the beauty of Wuyi Teas.

This and further discussion with him reminded me of another post that I'm working on, more about the experience of teas aside from the taste, cited from an expert reference source.

She claims she isn't an expert, but her background and tea perspective--"knowledge" doesn't really capture it--definitely imply otherwise.  To paraphrase one well-known tea vendor (expert?), stated in the opposite direction of this inference, someone claiming they are a tea expert might potentially indicate they aren't one.  No offense intended to tea sommeliers, which should relate to a real experience reference, but then few should be reading this blog anyway (thanks though, to the one that helps with comments).

So what I mean is more to follow on tea experience, related to how someone making these teas sees some of these other aspects.