Not so long ago I met an expat here looking into selling tea (Anthony; I'll pass on more contact information later if it becomes relevant).   This post will include a review of a nice tea he sold me, a Tie Kuan Yin, and a bit about selling tea. 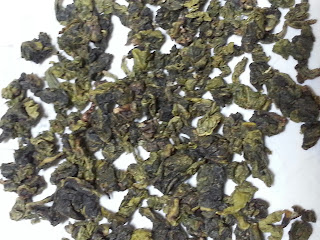 One of lots of people's favorite tea bloggers, Nicole, wrote advice about this not so long ago, some things to consider before starting this type of business.  Most of it is sort of common sense, really basics to think through.  Two online contacts that sell tea--maybe friends, depends how one uses the concept--have told me that doing it for the love of tea and the connections it helps maintain instead of financial returns are the key to them staying in business, and two other online contacts have closed tea businesses in the last year, so it's my understanding that it's not so simple.

Everyone knows tea is becoming more popular, even here in Thailand where that trend is less pronounced, but the process will take time.  Businesses succeed or fail in months or a couple of years while beverage preference trends and specific product demands run at their own pace.

This contact is early in the process; it may or may not go as far as a serious attempt at a business.  It's not so difficult to come by tea at some version of wholesale prices in a country that grows tea--Thailand does; most of Eastern Asia does--but finding better grades of tea and more interesting products are a different story, especially related to putting it all together as a business, and "wholesale" can mean different things.

I picked up the teas at an expat social function in Bangkok, in a hand-over that wouldn't have been so different if it was something the law didn't allow me to have, it would've just been less out in the open.  I bought the tea pretty much at a normal retail rate here--but then it all depends on grade, doesn't it?--for a price lots of tea drinkers in other countries would like to run across.  The different teas were nice, familiar, Jin Xuans and Ruan Zhis, just not really exceptional, teas you can find lots of places.  Up until a recent stroke of luck in my aunt finding unusual hill-tribe produced oolong and black versions of Thai teas were mostly like that for me, consistently good, not really ever great, with a few exceptions (like this Oriental Beauty style Thai tea).

One recurring theme in my perspective on tea is that it doesn't always need to be great; that lots of people drinking tea from tea bags--long story about that--or bottled tea, coffee, whatever else, could discover ordinary grades of products that could open new worlds for them.  I walk by a dozen bubble-tea vendor stands and a few coffee shops every day and can't help but think their customers all could've had something better and healthier that cost less.  Really nice tea costs maybe $1 for two grams (you might use double that to brew a couple large cups), with quite decent alternatives for a fraction of that, so although the premise is that they are paying for convenience the value just isn't there (per my preference, of course; value is a relative thing).


On to what the Tie Kuan Yin was like


Hard to describe what separates a good tea from a mediocre one or a great tea, or at least to capture that in a summary.  Reviews tend to talk about tastes, flavors, and then drift into feel of the tea and finish, maybe qi if someone is so inclined (feel in a much different sense--the outcome, the effect on you).  This tea was good, not the best Tie Kuan Yin I've had, but a better-than-average version, better than one might ever find in a grocery store, even in Asia (better to not test that too much, really, try one or two and then take my word for it). 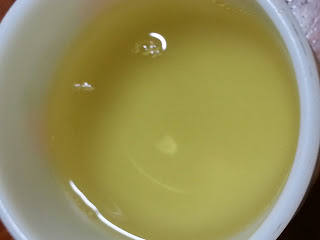 The taste was light and sweet, with lots of floral aspects (not my strong suit, separating out which flowers teas taste like).  Early on in getting into tea one tea-friend said that she thought sweetness and floral components marked better Tie Kuan Yin, and less sweetness and flavors more towards sweet corn predominated in mid-level versions.  Allowing for lots of natural variation by product, growing region, production, etc. that seems reasonable, based on what I've tried.


This tea was interesting for having a light, sweet component that inclined slightly towards citrus, tasting nothing like an orange juice, but more about that impression you get when you squeeze a peel and the oil sprays in the air, a refreshing sweet feel that's not exactly a taste.

The body was also a bit thick and smooth, with a lingering aftertaste.  Versions that are better yet take that to amazing extremes, so that your mouth is experiencing unusual feelings and taste that doesn't diminish much at all after drinking the tea, lingering for longer than makes sense.  It was nice to get some of the effect though.

One might note I haven't said much about what the tea really is; a Thai-grown tea, or brought in from China?  That I don't know.  I'd guess that it was actually Chinese--Thai teas tend to pick up a distinctive range of flavor profiles--and I think Anthony said it was Chinese, but that may be wrong, what do I know.  This leads back to one of the points Nicole made in those suggestions:  someone considering selling tea should know as much as possible about their potential products, tea in general, and especially what they plan to sell.

Is there any chance it wasn't Tie Kuan Yin, maybe a cultivar from Taiwan I'm not familiar with (like some of these), or something else entirely?  Sure.  I've tried a good bit of Tie Kuan Yin but none for awhile, and given that teas aren't always what they are sold as maybe some of it wasn't.  Another concern relates to the possible use of pesticides and chemical fertilizers, with "trusted" sources less likely to do so (the reasoning), but in a sense that just adjusts the leap of faith a bit.

It was a nice surprise to try a nice tea like this from such an unlikely source.  The others were decent versions of teas that are normal here, something I'd probably have appreciated a lot more if I hadn't already been drinking more Thai teas than normal this year.  I'm more onto Wuyi Yanchas now, and interesting black teas when I run across them, but lighter oolongs are staples of my tea habit.  One Ruan Zhi green tea was also nice, very bright in flavor, light and sweet, with traces of spice notes typical for that tea, but it really seemed a style in between what I've tried of Thai green teas and oolongs.
Posted by John B at 11:29 PM