It's been awhile since the last mystery tea, although some of what I bought in Indonesia in December was a bit vague, not so much labeling in English.  This tea came with samples provided by Cindy, my favorite Wuyishan oolong producer (who can be contacted here).  Her teas are the subject of many blog posts here, like this one about some background on making Wuyi Yancha,, or a review of Shui Xian here, or a Rou Gui comparison review, or as a reference in another about which tea plant cultivars are used to make Da Hong Pao.

In asking Cindy about what the tea is I mentioned a potential problem I'm running into with tasting Wuyi Yancha, after going through a lot of trying them in the last half of last year:

Now it's hard not to put the teas on a scale of some being really exceptional, and others good, and others not quite as good, but really it makes sense to appreciate them for individual characteristics too, to not just try and make a hierarchy out of it, judging mostly as just better than others or not.  The tea was nice, interesting.


So there it is; it was nice.  Of course the point behind writing blog reviews about teas is to go a bit further, so I will.  I never did get far with discussing this tea origin with her, so it remains a mystery, because as everyone knows a lot of people in China are travelling now and spending time with family, so I'll get back to bothering her with questions later.  Also, happy Chinese New Year! 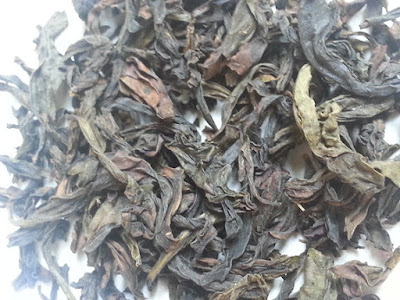 I've been off the Wuyi Yancha, and generally off the higher quality teas lately, instead drinking through some interesting but more conventional-grade examples I've ran across, from Indonesia and other places.  It's been nice to not try and describe teas for awhile, and to skip the write-up process, but I do have some really interesting research articles at different stages.

In order to place it against other teas and help my taste-memory I comparison tasted the tea against the Bei Dou I picked up from the Jip Eu tea shop in Chinatown (I've mentioned them in some blog posts, but I'll leave off with adding their Facebook page link here).

There are pros and cons of comparison tasting.  It helps identify some finer characteristics that stand out better when compared to another tea, but that really helps most when there is plenty of commonality so that you aren't tasting across too much context difference.  At worst it can be overwhelming, tasting different general types and comparing different taste and feel elements, and it all just muddles.  As a general rule tasting the exact same kind of tea works well.  But then I did try it with two very similar white teas (perhaps technically not Silver Needle, which they were sold as) and one having a strong smoky taste threw me way off any meaningful comparison.  Bear in mind all of this is just my own impression, not some standard approach or from an inherited body of knowledge, or "guidance from a master" type of instruction.

I could see how tasting the same tea type, say comparing a Rou Gui against another Rou Gui of a comparable quality level, could even be thrown off a bit by comparing teas roasted to a different level.  This would require accounting for that difference in assessing the two teas, since preference may shift the subjective impression as much related to that as the quality and other characteristics of the tea.  It's a completely different thing, and not a subject that's as clear to me as it might be, but the oxidation level from the preceding oxidation step--versus differences from roasting step--could also vary.


It may seem I'm drifting here for no reason, but the main point is that it's easy to mix different aspects of teas that don't have to do with the type or quality of the teas when comparing them, so over-all judgment could relate to a personal preference about one aspect and not so much about how other people would judge the teas.


This is a good time to mention / remind that Bei Dou is Da Hong Pao.  Confusing?  That linked post covers what Da Hong Pao really is, and the short version is that five individual plants represent the type, but at least two distinct plant types are derived from these, Bei Dou and Qi Dan, so any true Da Hong Pao is really one of these.  Of course it's not nearly that simple; that post covers a lot of the rest, but the final word is hard to pin down.


The teas were similar in general type, enough so that comparison worked well.  The background of mineral and earth elements common to roasted oolongs of this general type was similar for both.  The short version might be that they tend to taste like mineral and dark wood, which people often describe as saying the teas taste like rocks, also a reference to the translation of the Wuyi Yancha type as "rock oolong."

The Bei Dou may have been roasted a bit more, coming across with just a little more "char" effect, but not in a way that took away from the effect of the tea, which really would depend on preference.  I've read a reference that said that better teas of this type are always relatively lightly roasted, allowing the tea characteristics to stand out, with roasting used to mask flaws, or even cover up mixing tea types, but it doesn't seem to be that simple.  Preference, the starting point leaf type, and producer choices and style also seem to come into play.  I have tried a few very nice lightly roasted oolongs of this type (but enough with the links already, so I'll not go there) and it does seem that perhaps the best versions of lighter roasts appeal to me the most, even though this Bei Dou is a good example of a tea that works really well in terms of style, individual characteristics, and overall effect.

In terms of taste the "wild oolong" has the same background going on, the feel and base flavors, but with a bit of cinnamon and a root-like herb as main elements.  The one component tastes a little like sassafras, but I get the impression I'm missing taste-memory of a range of possible root based herbs, and it was really in between sassafras and what better root beer tastes like.

The Bei Dou had a bit more of the interesting aromatic characteristic that comes out in better Wuyi Yancha, which is really hard to describe.  It reminds me of the effect one gets from smelling better perfume, or the smell of certain types of ink.  I've ran across a review that seemed to compare that one aspect to the taste of alcohol, and it's a little like that, and it seems like people tend to mix it with descriptions of the feel of tea, even though that's sort of a different aspect.  The taste range had a little more roasted effect, again not so easy to describe, not so much like charcoal, tied back to that sweet, rich, mineral-intensive and compelling fragrance in ink.  The sweetness drifted towards the fruit range a little more, closest to peach, covering the same range in the general flavor structure that a light cinnamon component did in the other "wild oolong."

So both were nice.  There's a tendency to pick out a winner, to cite one as better in some way, maybe based on my preference, or even as objectively better tea.  If pushed to go there I'd have to say the Bei Dou is a better tea, but they were also just different.  Personally I'm really attached to that one aromatic component that comes out in better Wuyi Yancha, almost as much a feeling as a taste, and both exhibited it, more in the Bei Dou.  This cultivar (plant-type) version of Da Hong Pao is supposed to be especially aromatic, so this may relate to the plant genetics as much as tea quality, but to some degree all the inputs just come together in the final tea effect.


This Bei Dou example has a really clean feel to how the flavors are presented, if that makes any sense, with the "wild oolong" coming across as a very nice tea but just a little more muddled.  I've been running across a similar characteristic difference in a very different context in tasting black teas, comparing var. Assamica versions to other var. Sinensis types I've been more familiar with in the past.  Of course this is too general, trying to compare two different plant types and a completely different type of tea at that level of generality, with so many other factors coming into play, but as a very rough distinction--one so rough it's probably more wrong than right--it seems the var. Assamica based teas have an earthier, slightly muddled taste aspects presentation while the var. Sinensis come across as somehow "cleaner."


A tangent is tempting at this point since I've been discussing the relative role of processing input versus typical "terroir" related aspects and plant-type inputs some lately.  But I'll get back to that at some point, and will only say here that both processing and plant type potential seem to support different final aspects coming out in the tea.  It'll be a long time before I'd ever be able to guess at what inputs led to what aspects in teas but of course it's still an interesting subject.