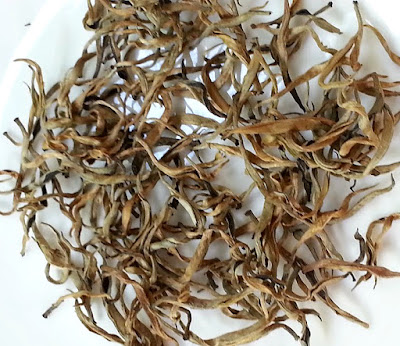 I'm trying out a Golden Tips style tea from Kinnari Tea, in Laos (Golden Flame, their name for it).  I was looking forward to trying teas from Laos before I even checked what they had sent, then all the more so, amazed by the types selection.  Others include a pu'er-style tea, Moonlight White, an interesting looking green, two versions of white teas, one a silver tips (the other I'm curious about), and a green-based version of an Earl Grey.  They have an instagram profile but haven't loaded pictures of all those just yet, but you can get the general idea.


They're all well-packaged even by professional standards, in multi-layer sealed bags, with clear descriptions, growing location citation, flavor-aspect notes, picking standard, and brewing instructions, including hot and cold brewing suggestions.  By outward appearances this looks to be one of the best novel tea resources most people have never heard of.  I'd be surprised if these weren't amazing tasting teas that sell at a good value too, although I've not checked on that last part.


Trying tea from Laos helped get me into tea, on a trip including a stop at a small local coffee grower, probably seven years ago now.  That was more towards the South of Laos, the Bolaven Plateau.  I've seen more online about better tea production in the North since, close to Southern China.  That tea I tried then was ok (hard to judge now since I essentially took up tea since), but I'm guessing it was far from reaching it's potential due to the farmer more or less just drying it in the sun.


I tried very fresh coffee there on that visit, both Robusta and Arabica.  The difference in those types was clear for the first time, and also how very fresh single-source coffee might be different (it was a bit fruity).  And they nearly poisoned me with caffeine in that tasting; as far as I remember that was my first near-anxiety-attack from that drug.  It might be a good rule of thumb to be careful about how much really fresh coffee you drink, and it seems likely that Robusta was running higher in caffeine level.


One of these teas is from that Southern growing area, an interesting looking green, but I think most are from the North (something I can check since locations are specified).  I've long since thought the right person with processing knowledge could build an amazing business out of developing the potential of the existing growing teas in a place like I'd visited, and I've read of at least one other business in Laos claiming that is their primary business theme.  That seems more common as one gets close to the edge of the South of China, in Thailand and Myanmar too, since there was no sharp division in past local tea production based on the current country borders.


The tasting notes say the tea aspects include warmth, hay, cocoa, citrus, and raisin must.  I went light on the first infusion--using a light proportion Gongfu style, although Western should be about the same for this tea--and although that infusion was a bit faint that sounds about right.  It will be easier to tell with a more standard infusion strength.

As a bit of an aside, I'm getting over a cold now.  That never helps with tasting but I think I'm far past it that it'll work.  The day before on break from review tasting I tried out making a masala chai with a mix of that smoky Lapsang Souchong and some generic CTC Assam I had around, mostly to test out if that smoke would work well layered with the spices, something I've tried before.


It worked well.  The chai spicing was the standard mix, ginger, clove, brown cardamom, cinnamon, and a dash of vanilla extract.  The only glitch was a bit of petroleum aftertaste, not in the warm, rich fresh crude range I'd mentioned not so long ago in a review but closer to engine grease, not as nice.  I'll probably give away some of the rest of that tea.


Back to tasting.  It is natural to follow the influence of the power of suggestion and notice hay, cocoa, citrus, and raisin, which is one reason I never read flavor descriptions before tasting.  The tea is like that, and it's a nice overall range for a tea to be in.  The complexity and those flavors might point in other directions, like the raisin could come across as date, or the citrus could be interpreted towards a citrus-oriented trace of other fruit or floral aspect, but really that list seems to catch it.  It doesn't have a pronounced mineral layer, really, a rich expression of cocoa extends across a lot of flavor range, or to some degree where that might be in the character gets expressed in the feel of the tea instead.  Or there's always the chance that I'm making no sense related to that last part.


Buds-only blacks can have a subtlety to them, definitely not the same as the range of white teas but not completely unrelated.  This tea is flavorful but just a little subdued, with some of the general effect out in the range of nice fullness and feel, as occurs with Silver Tips style teas, not thick like oolongs tend to be but different, not really dry, definitely not astringent. 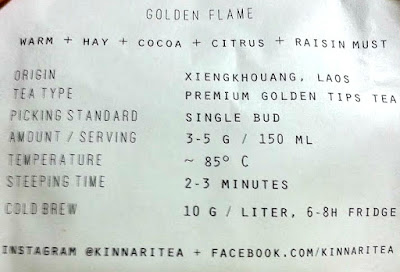 It's nice for being a bit unique.  I'm in the habit of seeing black teas break down into a divide of being softer, sweeter, and more floral, or possibly similar but heavier on fruit instead, or else with a bit of dryness and doing more with mineral tones, and this is just a little off of those.  I'm reminded of another blogger's take on a range of black tea styles recently, Amanda of My Thoughts Are Like Butterflies:


In my addiction, I have noticed that there are different categories of the stuff [Chinese black teas], ones that taste super chocolaty, ones that are fruity, ones that are odd and don't taste like anything else... It doesn't seem to be based on anything I can figure out, I have had two teas from the same region, made in the same style, from the same season but from different farms...taste completely different. This particular Dianhong goes into what I lovingly classify as the yam pile, strong notes of yam with a bit of malt, peanuts, and cocoa.


Sure, it's like that, although they probably span a continuum as much as they can be grouped.


On the third infusion the tea drifts a little towards mineral but the tastes are still in about the same space.  The cocoa is still a bit dominant but it shifts towards cinnamon.  Even brewing a little longer the tea isn't picking up more dryness, which would almost seem natural related to the rest, it still has a nice full, slightly juicy feel, or at least towards that.

It's a very nice tea, not giving up anything in terms of general quality level to somewhat similar Yunnan black tea versions I've been trying lately.  It's perhaps a bit more subtle, related to the style being black tea shifted towards a white style.  I guess it could be similar to that Ceylon Gold Tips I tried not too long ago in some regards.  I just had trouble dialing in that experience to a higher resolution for it being part of a lot of tasting and discussion in an unfamiliar context.  Related to those tasting circumstances, I'm reminded of a tea vendor friend's comment about tasting in a "meditative space," a subject I have gone on about.  As the level of background noise from my kids rises and falls it's easier or more impossible to really evaluate teas, and it can reach a level where I might as well just not bother.  That input was medium for this. 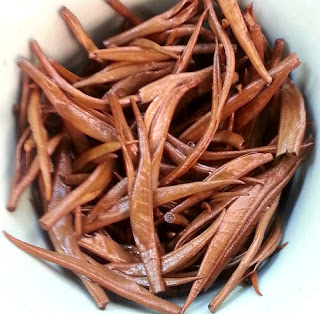 On the fourth infusion--I think it is--the character aspects shift a little more in the same direction for lengthening the brewing time, still nice, just as good really, just different.  Cocoa in a well-balanced black tea is nice.  The hay extends a little towards heavier earthiness and mineral but a separate description for that doesn't jump out.  It's not "woody."  It's refreshing to not be saying "sweet potato / yam," even though those aspects are nice in black teas when they balance well.  All in all this tea is just great.  I suppose a slightly different style matches my own preference just a little better but it seems odd finding fault in this tea, and I would expect people with a broad range of preferences to appreciate it.


What this tea gives up for being on the subtle side it claims back for brewing a lot of nice infusions.  I kept going with long infusion times thinking each would be the last and it wasn't fading much, or transitioning in any negative way.


I'm getting a bit behind in reviews, with teas I'm excited to try piling up, so I might switch to a less rambling review-only style.  But then I always say that and never succeed in doing it.  There was really more rambling to have been done here, more back-story about another type of personal connection to Laos, or more about visiting there, or about the company, or the one owner that I've talked with.  She's a German woman, who is not at all as edgy and intense as the side of my family that feels a closer tie to that set of my roots, the side that granted me my last name.  There must be lots more to say about how it's possible that this tea is this good, but with more nice teas to try I can get into that in later reviews.
Posted by John B at 7:38 PM