There was a tea social event in Bangkok this weekend!  It was at Sevens Suns cafe in Ekamai.  It was great that the owner, Han Mei, decided to host an event, and provided tasting of some interesting, nice teas.  Turn-out could've been better (hard to draw crowds for tea-theme events, it seems) but the event itself was great.


Of course I reviewed that cafe not long ago, for the second time after an initial introduction, related to a renovation to add indoor cafe space to a previous outdoor seating environment.  It's very nice now, and air conditioned, which is sort of important given the typical hot weather here.  I could go on and on about their offerings, and Han's ideas about how tea awareness and demand might develop here (with more on that in the first post), or related to him having a background in traditional Chinese medicine, but the original intention is to keep this short.  Here is a Mei Leaf Youtube video (related to the China Life brand videos) with Han doing a tasting of a Thai oolong with his brother.  That video also covers background on how Thai teas relate to Chinese versions and other types.


Han provided free tasting of several interesting tea types at that event:  a ginseng oolong, gaba oolong, Taiwanese Ruby black tea, Mi Lan Xiang Dan Cong oolong (the most common type, one that tastes floral, or in some cases like peach), a "Duck Shit" Ya Shi Dan Cong (a relatively trendy tea, although those peaks in specific type interest come and go), and a Tie Luo Han, one of the main Wuyi Yancha varieties, in this case a well-roasted example, as that type typically is.  The tasting wasn't structured as a sequential sampling flight, with lots of description and guided review, it was informal.  That worked really well given the people that attended mostly did  seem to have some background with tea, and it worked related to people coming and going.


Han also introduced some alcohols infused with tea, whisky, vodka, and gin, as I recall, and people tried tea cocktails.  I tasted one, the first tea cocktail I've ever tried, and it worked out a lot better than I expected.  It balanced, and the tea didn't get completely lost related to joining a stronger alcohol taste, it played a role.  Tasting the actual alcohols themselves, the full-strength versions, wasn't quite as approachable.  I drank a lot of whiskey and other alcohol when I was young, more before the official drinking age in the US than in the last decade, but I'm really not on that page now.

That was the short version already.  Related to the setting, the cafe is beautiful, with a nice bar seating area, sized to hold a half dozen or so people, and with plenty of other tables inside.  There is even more overflow seating outside, which wasn't required for this event.  It all worked out well.  Han and his staff were great hosts and the people I met there were nice. 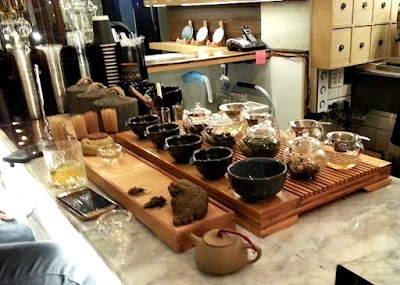 
The next typical direction to go would be saying more about those tea examples, I guess to start into review territory, but I really won't go down to that level of depth.  The teas were nice, and interesting, Mei Leaf brand teas (related to both his brother's London shop and Chinalife online tea sales, a related brand).  It's unusual to drink so many teas that vary so much at the same time like that.  Per some people's preferences more continuity might be better, staying in a more limited range, but I don't see it that way.  I think a lot of variation in types worked well.


That approach doesn't lend itself to review analysis but it's nice to stop doing that in different contexts, to appreciate the overall effect of teas more, and just notice individual aspects as they come to mind, and to skip putting a name to many of them.  It seems possible to miss the forest for the trees to some extent when conducting reviews, to zero in on attributes and character elements but not fully appreciate the experience for all the isolating and describing details.


I won't speculate as to where those teas stand related to other teas I've tried, or talk about loose tea quality or pricing much at all (interrelated topics), but I did want to venture into how I see it as a great resource to have this sort of a cafe environment to try nice teas in.  There was a time, not long ago, when only one such cafe was ever mentioned as an option in Bangkok, Double Dogs, a Chinatown cafe.  That is a nice enough place, reviewed here.  I've also reviewed Peace Oriental, a cafe positioned as higher-end, actually not that far from Seven Suns, just up the street in Ekamai.  From there though Peony cafe selling more mid-range loose teas and blends is more typical, with some odd exceptions out there.  Luka cafe offers some nice Ceylon (not the commercial versions, specialty orthodox teas, if that means anything).  I am probably missing other exceptions, but the general point remains the same, there are options, but this shop is unique in some ways.


Seven Suns is different than the others for offering interesting, nice-version range teas at a per-pot price range that competes with coffee shops.  It seems awkward to drift into pricing concerns--unthinkable, per standard tea-blog conventions, really--but since I see this point as important I'll do just that.  It matches the scope of some of my own self-assigned tea evangelist project.  There are no other Bangkok cafes--that I'm aware of, and I do look into such things--that give people a chance to try a broad range of teas of that quality at coffee drink pricing.


Teas at Double Dogs aren't exorbitant but as I recall they did price pots of tea in the 250-400 baht range (more than a year ago on my last visit), maybe something like $10 and up to try a tea in that cafe.  That isn't bad for trying really interesting teas, but more than coffee (in Bangkok at least; I've not yet heard of $18 cup of coffee options coming here, although maybe I just missed that).  Peace Oriental is on another page, with some really interesting options if pricing of 650 baht / $20 per pot of tea isn't seen as problematic.  I tried a tea there, once; it was good.

I've not checked Seven Sun's price range since the remodel but it had been down towards what Starbucks charges for drinks, more like 150 baht.  That really is a great value for trying something truly unique--teas like those we tried in that event tasting--versus having yet another giant milky-caramel-espresso-whatever those are.  Those can be nice; I don't mean to say there's anything wrong with dressed up coffee, it's just a different sort of thing.  Peony cafes sell teas in a similar price range, maybe even a little less, but it's not necessarily teas on the same level, with some plain teas but the shop more oriented towards blends, which are fine if one is into blends.  Their plain teas aren't necessarily bad but the last time I visited I couldn't decide that I really wanted any of them, since I've been a bit spoiled by regularly drinking better versions of everything they sell, and the range is limited.


As for buying loose tea the main channel now is typically online shops, or even different types of options that sell relatively directly from providers.  The selection available online is vast, with options across essentially all types, costs, and quality levels (for the most part).  Along with there being great values online there are also some overpriced teas being sold.  Beyond not having a chance to try the teas and judge them for yourself--against preference, or to rate quality level, which varies a lot--teas may not always be the type they are actually sold as.


If someone has a relatively unrestricted tea budget then trying the first 100 online outlets chance contact offers up may be a reasonable approach, but if budget is any level of concern then research and asking around online for recommendations makes a lot more sense.  At some point more targeted purchasing would be desirable to narrow variability to within a more positive range, but then one does tend to learn different kinds of lessons from trying bad teas.


An event like this tasting cuts all of those concerns out of the picture; a diverse set of teas is right there to try.  Online sales can never completely take the place of tea shops for this reason; you can only taste teas in person.  Beyond tasting events and shops that freely offer you the option to try teas before you buy them sitting down for a pot of tea in a cafe is a great way to expand your horizons.

Anyone in Bangkok really interested in teas might try out all the places I've mentioned here, with Seven Suns standing out as a good alternative among them.  And they do sell blends, iced teas, matcha, and cocktails, so lots of range, but I'd recommend moving past that to try out some better single-type brewed teas.
Posted by John B at 9:47 PM