Rou Gui from Cindy Chen, and a bit on tasting variation 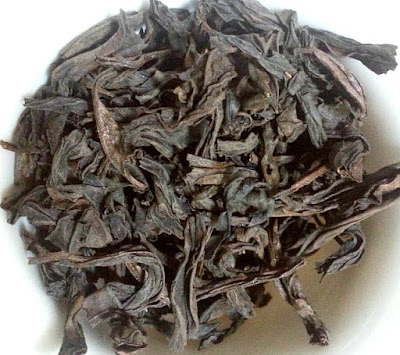 Just a simple, basic review this time, really.  And back to one of my favorite types, a Wuyi Yancha, a Rou Gui from Cindy Chen at that (my favorite tea farmer).  I'll mention again that she has developed a website in passing (wholesale sales oriented, a work in progress), and get on with it.

The look is a bit dark but I'm sure the roast will balance.  First taste:  it does.  It tastes like a roasted tea but that char effect is layered in a nice way, not heavy at all (all relative to preference, that, but then some people might not like roasted teas at all, I suppose).

A nice caramel aspect stands out.  There is some woodiness, and the normal layering of flavors that could be described as mineral (not pronounced in this, underlying), and then on to leather or whatever else.  The general effect is soft and rich, balanced on the lighter side, not a challenging tea at all, not the kind that only people really into earth-tones and dark roasting could appreciate.  This tea could be an eye-opener for people that haven't tried better Wuyi Yancha, but for me really familiar ground, just as it should be, a normal, good version. 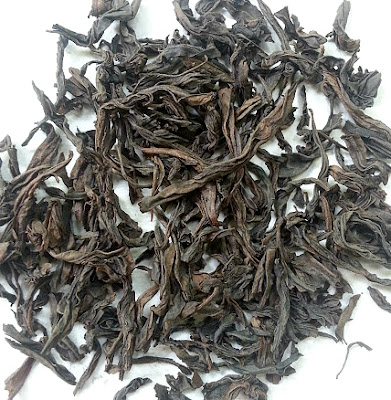 How close is it to being the best-of-the-best, one of those teas that typically never leave China?  That I can't judge.  Maybe so few ever did leave China that I'd have no baseline to go on, and it's hard to tell to what extent I've tried great versus good related teas.  I don't claim to have the God's eye perspective on teas (God's palate?) that some people lay claim to, which is surely more justified in some people's cases.  One of Cindy's Rou Gui versions won a Wuyishan local competition last year; that's a good sign.  But then they would make lots of versions based on teas growing in small, separate areas, so they would produce it in lots.  It's really good tea though, per a normal frame of reference.


Next infusion I went just a little longer, still using short infusion times brewing Gongfu style (in the range of 20 seconds, but without using a timer).  That caramel taste extends out to a very complex experience.  Some really would say it's too heavy on char, but for me this range of aspects and balance completely nails it.  Breaking this taste experience into a flavors list seems wrong, oversimplified, maybe even disrespectful to this tea.  Of course there are aspect descriptions to be singled out but the experience is complex and continuous.  I'll do that anyway.


Wood tones lead towards bark-spice aspect range.   It's hard to pin down the wood tone more, nothing too dark, maybe cherry-wood, chestnut, or hickory (but it's been awhile since I've smelled a lot of wood).  As for spice cinnamon and root beer are pretty far from what I mean, but relatively close in that general direction.  I wouldn't say it tastes anything like mineral or leather, but then the complexity is based on layers that won't really describe well.  More range really is integrated with the wood tone / char effect / medium caramel / towards spice-tone range.


I guess if someone was expecting cinnamon, and thinking about cinnamon, maybe it would seem more like cinnamon (the translation of the name, Rou Gui).  It's towards spice range, just not exactly that spice.  In a sense if I were really well-schooled on obscure spices range, other barks and roots, I could surely mention others that are closer, at least a combination of others.  But then that wouldn't necessarily be more descriptive since I'd be talking to very few people that knew of them. 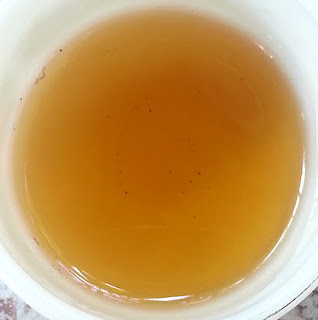 The overall effect is the nice part, the feel, the balance, the richness.  It's not like that heavy thickness that comes with lightly roasted Taiwanese oolongs but it has a presence to it.  To me there is absolutely nothing challenging about this tea.  Natural preference could mean someone else doesn't like it nearly as much as I do but I'd guess the normal, typical experience of it would be closer to my own, that most people would completely get it.  Better teas have that transcendent type of appeal to them.

A few infusions in the tea is tapering off a bit.  I suspect it will last well still, that it's far from finished, but it does fade a little quicker than some other types, not completely unusual for relatively more roasted teas like this one.  It's probably still medium, but medium for the general type is a lot of roast.  The flavors shift a little to emphasize the richer, earthier tones, the same general range, maybe the mineral underlying layer just picks up a little.

The tea is aromatic but that balances well with the flavors range.  I don't want to get side-tracked too much by what I mean by that, since I've beat it to death in the recent past, but it's an emphasis on scent that can come across similar to liquor characteristic or perfume.  It just doesn't smell like liquor or perfume, I mean the related general effect.  Some really floral and aromatic teas are perfume-like, and some aromas remind one of different liquors, but a tea could be aromatic in different ranges.  It's just a little perfume-like, in effect, but not floral (although it's complex enough that different people would interpret the complex range differently).  This range is tied back to the flavors aspects, earthy and complex, but on the soft and approachable side as those go, medium-tone woods versus dark wood, etc.. 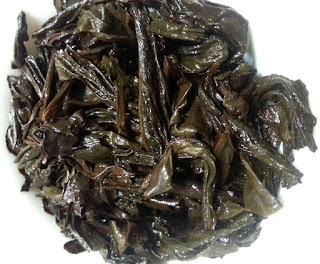 On the scale of which characteristics I like in Wuyi Yancha this is pretty much it.  Again, the words won't really communicate that, since I'm sort of saying I like wood, caramel, mineral, integrated char effect, etc., but it's how it all comes together, not just in terms of a balance but as a sum that seems greater than the parts.


I talked to Cindy about the tea and she said it seemed to have a fruit aspect to her.  Of course I didn't just mention that in this description.  I could see maybe something like lychee, since that taste range is subtle and tends to include spice elements (in some; there are different species of lychee).  This didn't seem like peach or something more pronounced to me, but it was complex enough that people would probably interpret it in different ways.  And it split the overall effect of flavors intensity and aroma, and that second part seems a little harder to read to me.

That does bring up another interesting subject, tasting error.  What I write is an impression, and sometimes in tasting teas multiple times my impression changes.  There is real variation to account for part of that, shifting temperature a little, or proportion, but to some extent it's about subjective interpretation, putting it together.  I keep talking about background noise as an element and that's a real example of one input, and I've discussed how your palate can shift a little over time, for example based on what you've eaten recently.

I suspect that people vary a lot more in their perception frame of references than they could possibly notice, and that people can practice and train themselves to lessen that, or that people have different natural capacities related to being more consistent.  I suspect imagination plays a bigger role in tasting than one might expect, that bringing minor inputs to the range of description isn't as straightforward as it might seem, and that connection process varies.  Enough rambling though; I'll probably circle back to this soon enough to go on and on about it.  There was an interesting discussion of ordinary causes of tasting variations in this  Gong Fu Cha Facebook group recently, if someone wanted to read a little further. 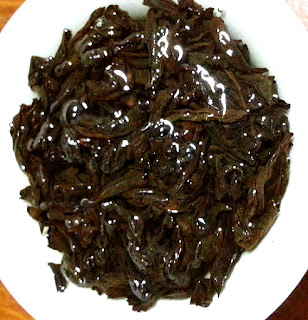 I tasted the tea a second time.  That helps narrow down variations in interpretation versus what one thinks of a tea in general.  It wasn't different.  I was thinking "fruit" while tasting it, more or less looking for that, and it can have an influence, but I didn't really notice that.


With the layers of complexity I described lots of things could be interpreted as underlying, as mixed-in secondary aspects, or woodiness interpreted as leather, spice interpreted as a type of mineral range instead, etc.  If there was fruit it might be in the apricot range, something on the sweet and subtle side that blends in with wood-tone and general spice.

The tea was nice, quite good.  It was so good someone wouldn't fully take the experience in based on one tasting, even though it didn't change a lot in trying it again.