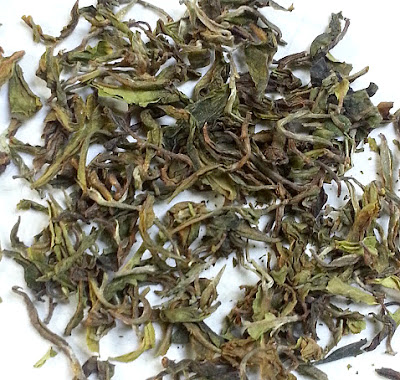 I'm finally getting my palate back after a rough couple of weeks with a throat infection, so what better way to celebrate than with first flush Darjeeling.  It might even help me re-calibrate.

What to say, it's a first flush Darjeeling.  It doesn't show up on their website, but then they also sell teas through resellers, and there are plenty of versions there.  A random vendor selling it describes it as a black tea, raising the typical problem with sorting Darjeeling first flush into categories.


It seems closer to a green tea than a black tea, and really more like a white.  I spoke with the estate manager about that by message and he passed on more background, which gets a bit complicated related to the processing steps.  It's essentially a white tea that's been oxidized a bit, but not enough for it to seem anything like a black tea.  There's more I could add but as well to get on with review instead. 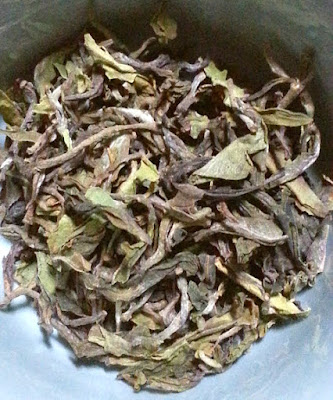 The tea looks like a first flush white tea.  The leaves are small, a little mixed between broken and whole, with a good number of tips.  The initial scent and taste is bright, fresh, and sweet, just what one would expect.

This flavor profile is familiar from both Darjeeling and better Nepal white teas, but still not so easy to describe.  The total effect extends well beyond a flavors list, and even that part isn't so simple.  It's all right there to taste, but quite complex, even though it comes across as one element, in a sense.  I suppose a bright, light floral tone might be the starting point, the main range, but it also has a citrusy fruit character, quite bright, like the spray from an orange peel when you bend it, or maybe brighter, a tangerine instead.  The rest of the complexity extends into other range, not vegetal in the sense of spinach, bell peppers, or anything remotely like that, but something light and sweet in that general direction.

Since the first infusion was fast and light I'll keep trying to pin it all down on the next few.  It would be typical to brew this tea Western style, and it would work well that way.  Out of habit and due to preference I'm preparing it Gongfu style instead, just not using the flash infusions or heavy proportion I might for some other types.  Really some teas--like a sheng, or dan cong--would tend to do well brewed very lightly, not using a high proportion or longer times, with longer being relative, towards a minute instead of 10 to 20 seconds. 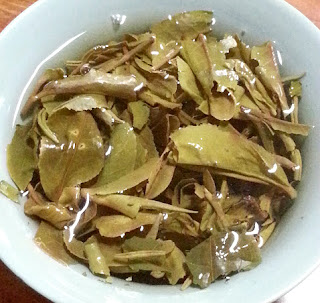 I just prepared a unique compressed shai hong (sun dried Yunnan black tea) brewed on the stronger side, heavy on proportion, with a bit longer times, and I might make shou that way, if I don't feel like having it prepared lighter just then.  This tea works well brewed lighter or stronger, or maybe best somewhere in the middle, towards lighter since it doesn't need extra infusion strength to be flavorful, to bring the same effect across.

On the next infusion the warmed-up leaves really come to life.  A tea friend just compared this general style of tea to drinking perfume, in a good sense, related to that overall brightness, aromatic nature, and intensity.  That was related to me sharing some Nepal white tea, which is in this general range.  That tea might give up just a little in brightness and freshness to this Darjeeling version, but it's still a good general range to be in.


The aspect range and term "aromatic" complicates considerations a little past flavors, per my experience it's used in Chinese tea descriptions to contrast scent-intensive teas with flavor intensive character.  This tea covers both.  It strikes a good balance, coming across as simple in nature in one way and complex in others.

Reducing it to a flavors list is still not so simple though.  I'll stick with it tasting floral, but not the heavier floral ranges I've been running across lately in other tea types.  It's definitely not astringent, at all, but there is a bit of dryness and very light edge that reminds me of a light wood tone, more like tasting a fresh and sweet tree bud than the sense I usually use that description in.  But who tastes tree buds, really.


To bring that back to the range of foods that aspect, that feel element, could be like a light, fresh sprout used to make a spring garden mix salad, something sweet and that you almost feel just a little rather than taste it.  Or maybe like a light version of an edible flower, but not an orchid, even lighter.  The citrus is pronounced, maybe towards lemon from tangerine zest, or even lemongrass (not citrus, really, but not far off).

More than all that it's freshness that stands out.  All this sounds almost exactly like the last first flush Darjeeling white I reviewed, doesn't it?  I wouldn't get bored with some degree of repetition, in the tasting, I mean, although I suppose writing the same thing or reading it repeating would get old.  Case in point:  the next infusion didn't shift aspects much, and it's probably better that it didn't.


A bit more depth and warmness may be filling in, lighter floral brightness subsiding a little to make way for a richer complexity, but it's not that different.  On the infusion after that it actually moves towards spice a little instead, close to nutmeg, warming up even more.


A lot of infusions in, maybe at six or so, I let it brew a little longer, and that one element comes across more as pine instead of citrus zest or wood sap tone.  It's possible that would've been a good description all along, and I'm just now doing the matching, but seems likely the transition had something to do with it, that the flavor shifted there.  I like pine needle tea, having reviewed it here, but I don't think everyone would.  The tea keeps on brewing, producing lots of infusions.

I suppose as with any tea not everyone would like this one as much as I do.  I tend to especially connect with a range of black teas and oolongs, and most of the range whites too, even though they're completely different.  First flush Darjeelings and fresh Longjing stand out as favorites outside the most typical range of teas I like, and this works as an example of that.
Posted by John B at 10:37 PM