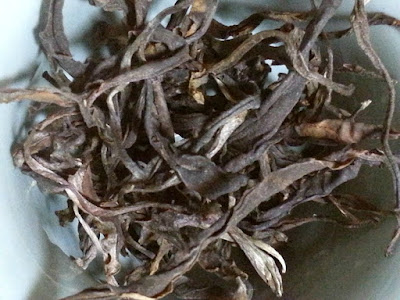 I'm getting down to the last of the tea samples from this great source for Laos teas, Kinnari Tea.  This review is about a version comparable to a loose sheng pu'er.

It's not from Yunnan, so not pu'er per the definition.  That leads back to the familiar story about teas being made in this region before modern boundaries were drawn, like this Myanmar loose sheng-pu'er-like tea.  This post is just a review though, not on background research, but that post delved into the regional tea history.

I've also tried Thai and Vietnamese versions, both in this loose tea form, although pressed teas--bings, or cakes--are now being made in all those places.  Here's a Tea Chat discussion of differences between loose forms of pu'er or pu'er-like teas (mao cha) versus compressed forms, if that's of interest. 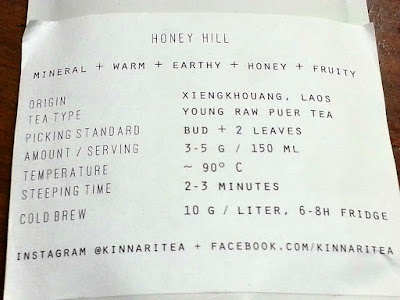 It's not exactly a review yet, but interesting to consider the label background.  It calls the tea "pu'er," but again that's close enough, probably a more reasonable designation than "sheng-pu'er-like-tea."  This recommends Western brewing, and mentions cold brewing as an option, but then anyone really committed to using a Gongfu approach wouldn't be deferring to label instructions anyway.  I'm not good with instructions--typically just a recommendation, really--so I prepared it Gongfu style.  The label description sounds interesting related to aspects, a bit soft and sweet for anything like a pu'er, but let's see.


The first infusion, brewed a bit lightly, is nice, sweet and soft.  The label mentioned honey, mineral tones, and some fruit.  Sounds reasonable; the fruit part might go further as it develops.

The next infusion is quite complex, very nice.  One minor disclaimer:  I'm pretty far along at getting over a throat infection, and it's funny how trying to taste something sets up a controlled environment that makes it easier to spot the perception difference.  I'm mostly recovered related to taste sensitivity, but maybe 95%, not quite there.  That's part of tea reviewing too, working around time limitations, environment factors, and other ups and downs.  If I waited until conditions were perfect this blog wouldn't see many posts.  Come to think of it if I waited until developing a really informed opinion on the teas it's hard to say when I'd have started to write; maybe not yet. 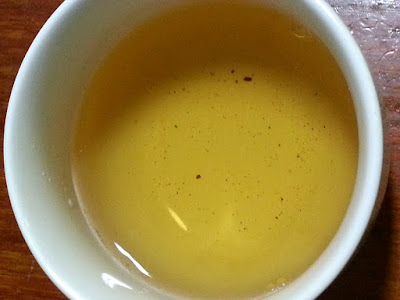 Honey and mineral tones really do stand out; the fruit is an interesting consideration.  It's so bright in character that it almost comes across like a citrus tone, but it's not quite that.  It tastes a lot like a bright and sweet version of other teas of this type I've tried, perhaps not so far off this "Shan" tea from Vietnam I tried some time back, just a bit cleaner and sweeter.  It's odd how rough the review posts I wrote two years ago were, as that one is; a normal enough transition.  The one flavor aspect range is sort of in between a light vegetal taste and a greener fruit, something I'm not really pinning down.


It's stronger on the next infusion, still hard to place.  There's just a bit of astringency, more a feel element than a trace of bite or edge, and a touch of bitterness.  Altogether it makes that one taste aspect come across a bit like eating a slightly unripe banana, not such a bad effect.  The general softness and sweetness help balance that, along with the mineral tones adding complexity, and a general impression of freshness.  It's not my favorite style of tea but it's nice, pleasant and easy to appreciate.

I'm not as clear as I might be if the one trace of taste aspect is really fruit or maybe floral; in later infusions it seems more floral instead.  As infusions go on the warmth picks up a bit, almost leading into a spice tone aspect.  It doesn't quite develop to a spice tone, maybe just off a little towards a character in between root spice and that bright tone resembling the scent of fresh cut green wood.  Even later the green wood softens just a little more, and levels off in that nice, warmer space.  I've been brewing it lightly, and to some that approach would be giving up some of the feel, but lots of flavor comes across made that way, in a nice character range.

All in all I really liked it.  It's a bit soft and approachable as young sheng goes, even related to those versions of Jing Mai teas I was trying.  It would be interesting to see how some aging changes it.


One encounters the idea that astringency in some versions of young sheng is positive since that will transition to softer and aromatic aspects later, but I'm not sure about that, or how that idea relates to the general aging potential of this tea.  The loose pu'er-like-tea version from Thailand that I'd tried that seemed a bit similar--before starting this blog, so there's no post to mention--wasn't nearly as sweet and a good bit edgier, more astringent, for better or worse.  I've made peace with teas tasting a little like taking an aspirin but a little of that goes a long way.


I mention aspects of my life from time to time, and have been sharing more pictures lately, but those never really fit into post themes.  This is no exception, but I'll add a section on local events anyway, even though it has nothing to do with tea.

My Mom asked if people celebrate Easter in Thailand a few days ago and I wasn't sure what day Easter even is (I'm not particularly religious, but that's really kind of long story).  The short answer:  no.  Being a Buddhist country they observe a different set of religious holidays.  It's the traditional Thai new year now, their Songkran Festival, so that's what's going on this week.  It looks like this:

We tend to not go into the main places they celebrate that, which would involve getting continually soaked with water guns, but to some extent it is everywhere.  It makes more sense that it's always the hottest time of the year now, a perfect time to get soaked. 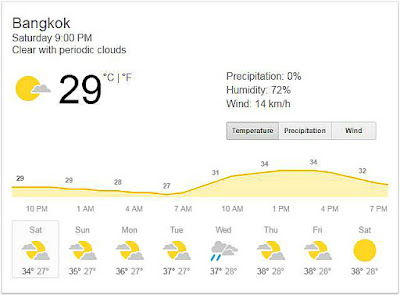 For readers back in the States the Fahrenheit version may be more familiar: 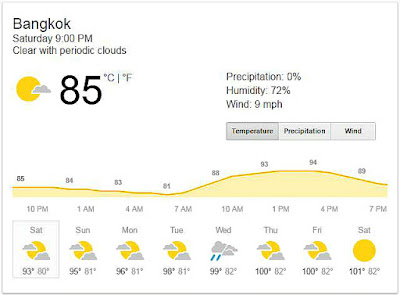 Put that way it doesn't sound so bad; it's 85 now (F), and was "only" 93 today.  The 101 coming up has me concerned, but I've lived in Texas--Dallas and Austin--where all of August is warmer, and I would vacation in Utah and Arizona deserts where that was nothing. 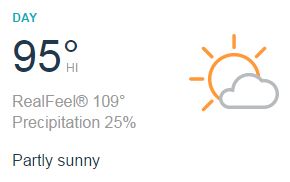 But of course it's not the heat, it's the humidity.  With wind-chill (the cold weather equivalent, more or less) you can just step out of the wind, or put a jacket on, but aside from being in air conditioning you feel that effect here.  This reference says the current 72% humidity level relates to 95 feeling like 109, and it really did today.  I loved the clean, warm feel of 115 degree temperature in a bone dry desert, perfect for hiking, but it's too muggy here now.


It works well for visiting a water park, since there's no chill in the air to experience, which we did yesterday.  Those kids ran me ragged.  They took a break to eat, but not much more than that.


I miss the States, of course, and my kids experiencing things like Easter egg coloring and hunts, which we could set up here, but we tend to pick our spots related to invoking Western culture.  They do a little with Christmas, which of course my kids love, and observing Halloween varies year to year but it's never the same.  To me it's part of it, living in a foreign country, making peace with my kids observing local traditions more than those I grew up with.  As a child I loved the seasons and the holidays, but also family-specific traditions, like going to the local Conneaut Lake Park amusement park.  I guess that's similar to what we're experiencing now, just more on the Thai side related to holidays.