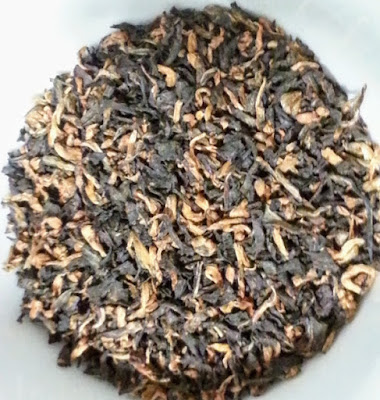 I'm trying a sample of an Assam black tea sent for review by the Halmari Tea Estate.  I'll start in with review, and get back to how this relates to other versions they make at the end.  It's sold as an orthodox tea, with leaves a bit chopped as some other orthodox tea versions go, but it's certainly on the more tippy side.


It's malty!  The flavor profile is clean, with good balance and complexity beyond the malt, so it seems like pretty good tea.  Beyond isolating more flavors one main question will arise:  how good?  I might also mention that I first brewed this tea in between a typical Western proportion and timing and a Gongfu approach, using a gaiwan, so really closer to the latter.  Using a hybrid style is actually somewhat typical and familiar to me, but I'll get back to trying it prepared more conventionally as well, using a straight Western approach, and will mention how results vary for both.

In their instructions they are almost certainly assuming that someone would use boiling point water, but trying out backing off that temperature just a little is probably worth checking out, since the slight variation in outcome would map differently to different personal preference.  I made this using water just under boiling point for the first brewing, and I'll get back to using hotter water in the second Western brewing trial.


I would guess that it's the high proportion of tips giving the tea a more resinous feel and slightly piney flavor, both positive.  The tea really just tastes like a better version of Assam; mostly malt, some mineral range grounding that, not quite as pronounced as in some better Ceylon I've tried.  There is also an earthy range, pretty close to cedar wood, or maybe redwood instead. 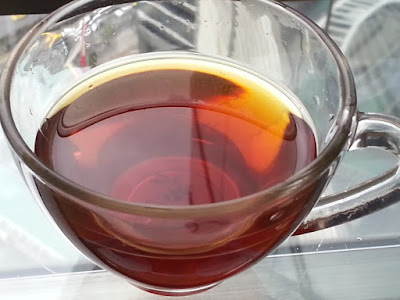 For the second infusion I went slightly cooler and faster to try a light version of the tea.  I can check a more standard infusion strength next time to see what transition might be occurring.  My impression doesn't change much trying a very light brewed version instead; the same list of aspects and relative proportion applies.  The feel and flavor intensity lighten but the aspects stay the same otherwise. 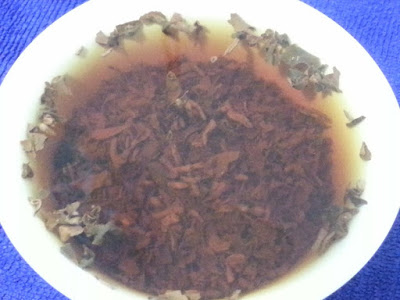 On the next infusion--medium in brewed strength--the malt drops down to a more evenly balanced level related to the other two higher range aspects, pine and cedar wood.  If using a Western brewing approach based on a three or four minute steep time someone would experience the average of those first three steeps, more or less (but sometimes results do vary more than one would expect, and it's not that simple).

Brewed stronger the next time the pine aspect picks up.  It's actually in between the somewhat rosemary-like flavor of pine needles and the earthier, richer scent of a pine cone, tying into the wood aspect.  Mineral underlies that, but in a way that's subdued compared to in some Ceylon.  It's still plenty malty, of course; that's still the main aspect, balanced by the others.


I'm assuming this would seem like one version of an English Breakfast tea to many, an unblended variation.  It's probably just a good bit better than most versions related to tea quality level, and more distinctive related to being a single type, perhaps giving up some complexity due to not being a blend of tea types.  Blending teas might relate to two different factors, really:  achieving a balance of aspects by combining teas that vary, as for Bordeaux blend wines, a mix of five grape types, and for covering up flaws in one or more of the teas, or offsetting using lower quality versions of all of them.  There is no flaw to compensate for in this tea (although essentially any tea version could be better in some ways), but it does express a specific and limited aspect range, with intense flavor most pronounced.

It would work really well with a range of different foods, probably better than drinking it without anything.  It's not really astringent, at least as I'm preparing it, but not really a soft or mild tea either.  The taste range is bold, for sure.  It would offset either savory or sweet foods well, I would expect.  I did try it in later infusions along with a mild vegetable and tofu mix with rice at lunch, which worked, but it could hold its own alongside stronger food or counter sweet pastry well (more my typical breakfast).

It would almost be a shame to blend a tea with this clean effect, balance, and complexity.  But that could work; it has a lot of that particular flavor range to contribute.  It would probably be fine with milk, I'm just not used to tea prepared that way.  This tea's flavor profile would work well in some type of Christmas blend, along with cinnamon and fruit elements (like in this post, or this one).

It's pretty much the same; again with malt dominating, pine and wood filling in the flavor range, with mineral tones as a base.  Some sweetness balances those aspects, and the overall flavor profile seems relatively clean in character, not muddled by any off earthiness. I expected using hotter water, brewing at full boiling point, to ramp up astringency more but the feel of this isn't an issue for drinking it plain.

The strength of flavor of the tea is plenty strong enough in a relatively light preparation.  I can see why this type of tea would make sense for blending; it's as intense across that limited flavor range as any type or version I've ever encountered.  CTC Assam is like this but with much stronger astringency, and the flavors aren't quite as distinctive.  That's per my past experience, at least; it's not as if I drink that much Assam.  I've been reviewing other Assams recently, but I won't really focus on comparing this tea to those.  Maybe later, after I've tried a few versions, but comparisons across months of time can be problematic, not just related to taste memory, also to factoring in the effect of expectations shifting.

Background on the type


I just ran across an interesting introduction to black teas that covered the general types, so it seems a good starting point for mentioning more about what Assam is, then moving on to introducing the producer and this specific tea version.

That article was called "Black tea:  global variety for every taste" by Peter Keen.  The trick for writing a general summary overview like that is what to include and what to leave out, in addition to getting the ideas right.  Both were fairly successful.  Since this is a tea blog I'll have to criticize some choices and content a little but in general it all works.

Assam is listed as the boldest, most full-bodied type.  That matches this review fairly well, and my general impression; they're not light black teas, not really even medium.  Astringency and flavor tend to mix as factors, with the former really relating quite a bit to processing style, and probably also growing conditions, but as flavor intensity goes Assam tends to be on the strong side.  That author mentions this producer in citing some characteristic source examples:


Hamrutty is soft and smooth. The leaf is flecked with gold tips. These are a common feature of great Assams and help lessen the astringency common to most. Halmari offers a wide range of both high end and broken leaf teas. Mangalam’s teas are lighter than most Assams, without losing their punch and robustness.  These are terrific buys.


Ceylon may well be a little lighter, as shown in that graphic, although to some extent it tends to just swap out malt for ramping up the underlying mineral effect too, still lighter, but also just different.  The "brisk" reference in that Ceylon section of the graphic really relates to astringency, as I understand it, which varies by other factors than origin.

Darjeeling and Chinese teas tend to be lighter yet, and I'd even agree with this placement, saying that Darjeeling tends to be a little stronger in flavor between the two.  Here's where a complication comes in that didn't make the cut for level of detail:  first flush Darjeeling tend to be less oxidized, and not really black tea at all, so it almost doesn't make sense to consider them as the same type of thing.  They're lighter than all other black teas because they're not black (fully oxidized).  Some Darjeeling first flush have a good bit of a characteristic form of astringency but that also relates to lots of factors, and some are quite soft, even fruity.

I've ran across the description "congou" for Chinese teas but it doesn't come up much.  Per one source it was a reference to Gong Fu, used more often to describe a general brewing approach, converted to a marketing term that isn't common now.  Area diversity is the complication there; Keemun and Yunnan blacks (Dian Hong) are mentioned in the article, but per the standard story Lapsang Souchong, a Fujian black, was really the first example of a fully oxidized tea.  But who knows, really; I'm not sure how well conventional understanding and the actual history matches in this case.

Beyond all that missing the next level of detail is kind of a given for a shorter work.  The overall take and choices for where to cut that off weren't so bad.  I'd have covered more characteristic flavor descriptions but that's how related choices would go; people would say different things.


About this producer, Halmari


For purposes here it may not be necessary to say more than that they're a tea plantation in the Assam region, but I will anyway.  Their own intro, the start:

Halmari is located in the Moran district of Dibrugarh, Assam and comprises of 374 hectares of land.


Apparently that works out to 924 acres, a lot of space, and they have 100 year history to go along with all that land to work with.  Their description of this tea:


Leaf : A fine blend of deeply rolled clonal orthodox leaves with a sprinkling of golden tip.

Per the site descriptions and pricing their GTGFOP1 Clonal is essentially the next level up of a similar tea, with the pricing on this particular tea quite fair for as good as it seems.  By that I mean this tea costs a fraction of Chinese teas at a comparable quality level, but then I am comparing direct online producer sales to foreign retail outlet sales, not really the same thing.  I still have other samples to review, including an oolong that should be interesting, and I'll see if more doesn't turn up about plant type somewhere along the line.


"Clonal" is a reference to preserving consistent plant genetics by using cuttings as opposed to seed-transmitted growth, an idea that comes up with Darjeeling and other region teas, but there are still details about what the plant actually is.  Variety Assamica as a general type, of course, but I mean beyond that, how it might differ from what was growing wild hundred of years ago, or is present in Yunnan, China now.  All that is really only of academic interest anyway; all you really need to know is experienced by brewing the tea.