I've written about the local Chinatown before, so no need to go back through all that.  I wanted to say a little about the last visit and then move on to discussing a tea.

I picked up four teas there on that visit, two Liu Bao I just reviewed from Double Dogs Tea Shop (a cafe there), and a Ya Shi (duck shit) Dan Cong from the Jip Eu shop, and sample of a Horse-head area Rou Gui they gave me.  I met a friend there, Ethan, the reason to go.  And I ran into someone I had only knew online before, the guy who had recommended the Jip Eu shop to me; cool that worked out. 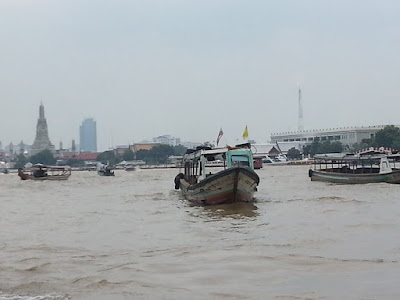 I took an Express ferry down there; I love those.  If you visit Bangkok you should find some reason to take one.  It's like a bus, and costs around 50 cents per trip (something like 15 baht), and to me it feels like being on vacation just to be on it, and they can't get stuck in traffic.


Picking up some extra ziplock-seal style packaging (envelopes?) for sharing tea samples came up, since I'm almost out, and to my amazement I found the store I was looking for, right where I remembered it.  That Chinatown is a bit of a maze so it usually doesn't go like that, at least off Yaowarat, the main street.  Other sidewalk vendors and shops were selling all sorts of things, but I was kind of on a timetable so I didn't do much looking around.  We stopped by a temple on the way back to the MRT (subway) on the way out, and Ethan's girlfriend had a chance to pray a little, all normal enough in Bangkok, like walking by a 7-11.


In one sense I love the Chinatown here and in another I don't.  I don't find the food vending options inviting.  It's not about the way that the kitchens are a tiny steel table with a wood fire or propane flame, but the way that seating areas are typically a couple tables about the size of a menu, or nothing at all.  If I was more into meat on a stick it would work better.

I don't buy a lot in Chinatown, but I will pick up things there I wouldn't buy elsewhere, like chrysanthemum (tisane), or dried persimmons.  It's a good place to pick up low quality Chinese toys, or really any number of things from China.

Tea can be hit and miss.  I bet there are a few really good shops scattered in with others selling low to medium quality Thai and Chinese teas.  It takes time to sort through options, and some degree of gambling (as in this case of trying out a fake tea).

I wasn't so into that fake pu'er (bargain LBZ) when I first tried it but after having some nice Yiwu versions over the weekend I'd like to check it out again, and with tweaking brewing just a little it may work better than it had at first.  There's a second factor about modest quality level teas somehow making more sense once you try a better version that shares some aspect space that I won't get into.


Per past experience it's not that unusual for Chinatown shops mostly selling teas out of huge jars to have some decent longjing in a refrigerator off to the side, but so far I've ran across nothing related to other better teas, outside of the places I'm already mentioning.  I'll get to more of them later.


There is a one way to tell if a shop vendor is really interested in sharing tea experience above and beyond profiting off you as a customer:  if they share a tea that they don't even sell.  The owners of Tea Village (shop in Pattaya) used to do that.  The Jip Eu owner has before, a nice black tea he made himself last time, and this time he let us try some of a tisane blend he only drinks himself.  That tisane blend was ok, different; I could relate to how it wouldn't work to just drink tea all day long.  And passing on a sample of Rou Gui he doesn't sell was really a little over the top.


Kind of strange to be adding this to a Bangkok Chinatown shop visit post, isn't it?  My friend Ethan passed on a tea from Taipei during that visit, so it was central to the visit.  I had him pick up that tea for me so I could try to reconnect with the Lin Hua Tai shop owner a bit, who isn't active online, which sort of didn't work (their website lists a phone number, and an unofficial Facebook page doesn't provide contact options).  And since he ended up liking the tea and I mostly wanted to cover that Ethan shared some of the tea instead of re-selling me the whole package.  Someone giving you a good sized sample of decent OB is a very nice thing.

Ethan tried both the highest grade and the second level and thought the second was roughly as good, just different in character, really even better suited to his preference, so he bought that one.  It'll be interesting comparing it to their other highest level version (the one from January; I suppose it could be quite different year to year, especially for that tea type).  I drank all that tea, so I can only compare it related to memory and notes though.  Onto review then.

The look, dry tea scent, and initial rinse / short infusion (which I didn't throw away) is in the right range:  it's a bit bright, sweet, and complex, towards citrus, spice, and muscatel.  It'll be easier to separate that out in a more standard infusion. 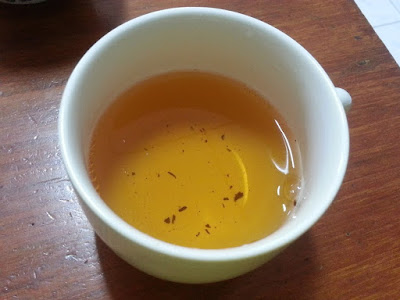 The tea is nice, brewed stronger.  I've got a touch of a cold again (I'm not an especially healthy person, in general) and I think a slight flatness in the flavor profile is more from that than from the tea.  Beyond that it does come across as clean, sweet, pleasant, and quite complex.  There's so much going on that the flavors tend to mix a little, but it does include citrus, a trace of muscatel, and some spice range, towards cinnamon but not exactly cinnamon.  The oxidation level is noticeable, but not as high as that sometimes is for this type.  It's definitely a more oxidized oolong but not pushing the edge of a black tea as some do.  So 70%?  I never was completely clear on those sorts of numbers.

On the next infusion the spice picks up a little, and I suppose the fruit drops back just a little too.  I like Oriental Beauty that has a lot of spice aspect to it so this version definitely works for me.  The exact description is hard to place; it's not far off cinnamon, just not exactly that.  That same aspect trails into a light, aromatic woody range too, towards cedar.  Someone really looking for bright fruit versus spice might be disappointed, or that extra bit of oxidation in some versions can lend them a different kind of complexity this doesn't have, pushing into the grey area between more oxidized oolong and black tea.  This retains a brightness and lighter feel those wouldn't have, so at some point all that gets to be stylistic and aspect trade-off.

I can see why it might be regarded as a next-level-down version though; the complexity is good, and the aspect range is positive, but the best versions really do possess an intense fruitiness that this doesn't have, or at least to the same degree.  I have tried other OB versions claiming to be the best of the best, most type-typical, etc., that weren't quite this good, with some being passed off as dollar-a-gram teas.

Unless I'm mistaken this tea is a great deal for the type and cost.  This tea (and their second-level teas in general) sell for 2400 Taiwan dollars per jin, or around $80 US for 600 grams.  So Ethan bought this tea for $13 for 100 grams, or half what any mid-range version would be on the US market, although it's definitely better than most of those (per my limited experience).  This is tea from a wholesale oriented shop in Taipei, though, so it should cost less.  The highest level version cost 4000 Taiwan dollars, which works out to $130 / jin (600 grams), or $22 / 100 grams.

Tea drinkers in the US might wonder about that selection process, choosing a next-level-down tea version to save $9 for 100 grams, when both sets of numbers are in a very moderate range.  An online friend living in Taipei mentioned buying tea from the shop next door (Lin Mao Sen; more or less the same type of outlet, with a family relation between the two), and buying "grade B" teas because they seemed essentially the same to him.  It's conceivable someone could like the style of the "lower" version better, based on personal preference differences, which is part of was going on for Ethan.  That "A" version was just a little higher in oxidation level, both of which are standard for the type, and to him that seemed not as preferable.

On the next infusion more of the same:  the fruit keeps dropping out, really well faded a couple of infusions in, and in not so many more the spice went to wood tones.  I guess that's the main thing that seemed to separate this from a next-level tea, to me, that it had some really nice character but that it transitioned away from that relatively quickly.  The first two infusions had fruit, then next couple mainly spice, and from there it was mostly just wood.  Cindy (Wuyi Origin Cindy) has mentioned that before, related to copy-cat versions of teas, that they can do a lot better at achieving the right profile over the first couple of infusions but they fade fast, and the feel probably also suffers quite a bit from being lower quality tea.

This version isn't a "fake" tea (I don't think, although I can't tell for sure that bugs bit the leaves); the point is that in both cases the grade seems to relate to starting out positive and shifting from there.  In the case of those off-location origin Wuyi Yancha Cindy meant that the teas would just completely drop out quickly, which is a familiar experience, and one runs across the idea that Wuyi Yancha don't brew many infusions because people have yet to try better versions.  As I'm remembering an Oriental Beauty version from Vietnam was much fruitier and brighter than this one, moving into spice after a couple of infusions, but staying positive through a full cycle.  That would be an exception though, a case where a copy of a tea type made elsewhere matches up with good versions of the original.

This was still good tea, with the typical aspects profile, it just didn't seem to brew a lot of positive and consistent infusions as well as some others.  To some extent that is a bit of a trap, though, trying to experience better and better versions of every tea, as if each competes with all the others.  It's good to appreciate each tea for what is pleasant about it, and there is plenty to appreciate about this tea.  There are two more really interesting teas to talk about from this visit too, one that's likely to be one of the best Rou Gui I've ever tried, and a commercial (mass produced) Ya Shi (duck shit) Dan Cong, which is kind of a strange idea.  It'll be interesting to see how that works out.
Posted by John B at 11:16 PM