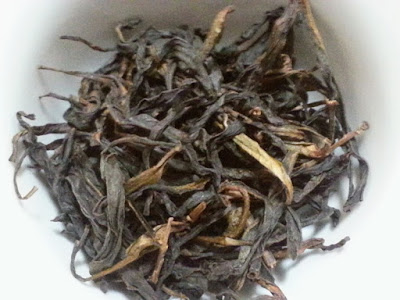 I'm reviewing the first of two teas from visiting the Jip Eu shop a couple weeks ago, this one a Ya Shi (duck shit) Dan Cong.  I usually pick up Wuyi Yancha from that shop, more or less their specialty, but I did try a commercial version of Dan Cong that seemed reasonable awhile back.  I wasn't really familiar with the tea type then (two years ago; the time just flies), so it will be interesting to try another based on a good bit more exposure. 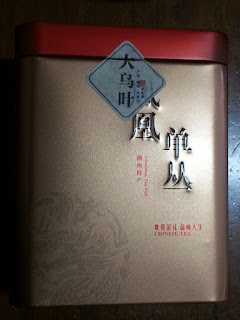 Along with the various versions I have reviewed I tried a round of four Dan Cong samples from a European vendor passing through town this year on a sourcing trip, but didn't write about those teas.  Without really knowing an origin part of the point drops out, reviewing what someone else might try, and they were essentially presented as some random samples.  One was even a mao cha, an unfinished tea.

Based on the last commercial version from this shop I'd expect this tea to be good, just with a bit more astringency than is present in some of the others I've been writing about.  As for appearance and dry scent the tea seems about right, rich and sweet, with just a bit more yellowed leaves than is typical for well-sorted tea but not really much for extra stem.


The rinse, which I didn't discard, is in the right range, sweet, complex, and rich flavored.  It seems heavy on aroma versus flavor, if that means anything, typical for the type.  And perhaps just a little edgy, with just a bit more of that unripened fruit bite than some other better Ya Shi had (like this one reviewed last).  It's an odd aspect, a feel element, really, but one that also can be combined with a bitter flavor aspect in some instances.  There are two different ways to moderate that:  to drop brewing temperature, as is common with other tea types, or to use very short infusion times, which seems a standard approach for these types of teas.


I'm using water around 90, so not full boiling point but not really cool, and I'll see about shifting timing to make it work out.  Maybe it goes without saying or maybe it's only a judgment call on my part but to me Dan Cong as a type really do require Gongfu style brewing to draw out most of their potential; they just haven't turned out well experimenting with Western style brewing in the past.  This particular tea would also be great cold-brewed, which I normally wouldn't use for Dan Cong due to trying to maximize the potential of a tea, but a moderate cost version like this one is suitable for experimentation. 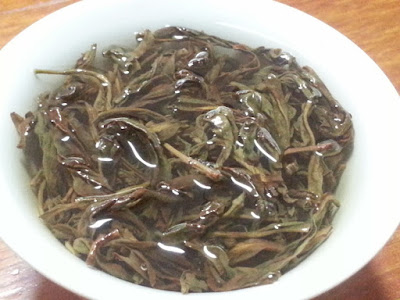 The tea is nice.  It isn't quite as soft, subtle, and aromatic as some versions I've tried but it's nice tea.  It does have a similar complexity and flavor range as other Ya Shi, which is all not so easy to describe.  It's mostly floral, but a soft, subdued range of floral tone.  There is good sweetness, towards the range of honey, and complexity that extends beyond obvious flavor range.  It tastes like Ya Shi Dan Cong, but that's sort of a circular description, only saying that it tastes like what it is. 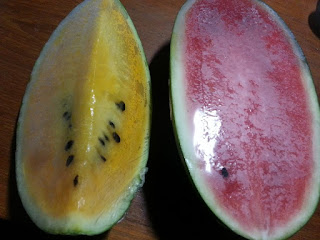 The most promising approach would be to zero in on floral tones it relates to, but I'm not so good with flower flavors.  Beyond that the sweetness reminds me most of yellow watermelon, which itself is a bit non-distinct.  It's bright but rich at the same time, with plenty of high tones similar to flowers or that fruit, extending and connecting to a richness that is subtle, like a very light form of toffee, not so far off honey.  Oddly my wife bought yellow watermelon the day after I made these notes, and the red kind; I should try that again before my kids eat all of it.


Something about the warmth and aroma-based nature of aspects in the background also reminds me of spice, but no specific spices come to mind, maybe a mild and sweet root spice, along the lines of sasafrass.  Astringency is pretty limited, not the potential issue I thought might come up. 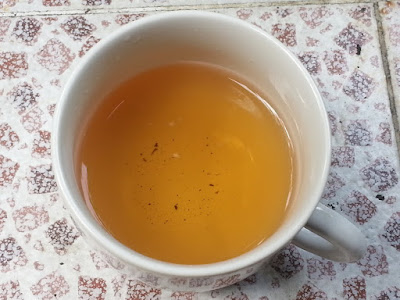 Mind you it's good tea, just not great tea.  There is another level out there, a way that similar flavors and feel can extend into a really creamy and full richness, covering lots of subtle range that defies description.  For the price--550 baht, as I remember, for 100 grams, just over $15--it seems a steal.


On the next infusion the brightness gives way to more richness.  It might have related to using a slightly longer time but the astringency picked up just a little, not making the tea edgy, just shifting the balance a little.  The light toffee moves towards light caramel, and the feel thickens a little, maybe related to being brewed a little stronger, or it could just be transition.  To bring that back to talk about flavors the bright yellow watermelon fruit tone diminishes and the bright sweet floral moves to a richer floral range.  The astringency isn't just a feel in this tea, it ties to a trace of light bitterness, like biting a plant stem, but not much of that, so it still works well. 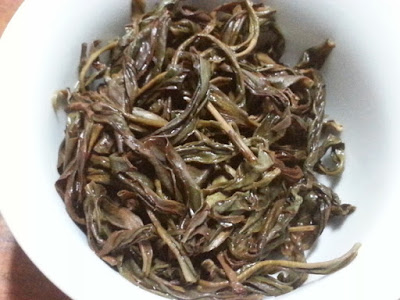 The level of roast seems to work well for this tea.  It's not roasted much, so it doesn't push the flavors to be much richer and heavier, but it must be a little, softening the tone and filling in some of that light toffee / caramel sweetness.  This tea is really exactly what I'd hoped it would be.  It could be slightly better, more like $20 / 50 gram quality tea instead, but for costing less than half that it seems a lot better than it should be.  There are certainly specialty vendors out there selling tea that's not this good for twice the price, or more, and they could still be right in claiming that the various quality level versions are type-typical.


At around the sixth infusion in the flavors are shifting to thin out and astringency (that light edge) is playing a larger role.  The best Dan Cong go a little longer in the original range, or stay more positive longer, but at the same time it's also not that unusual for the type to transition on that time-frame.  It's still what I would have expected.  It went on to brew a good number of infusions, it just lost that most positive and interesting character after the first five or so infusions, transitioning throughout those as well.


For a daily-drinker type tea this version is great, better tea than a lot of people who consider themselves tea drinkers might know exists.  For tea enthusiasts with broader types exposure it seems worthwhile to appreciate a range of teas for what they are, to not get caught in the trap of expecting every tea to be better than the last.  Supported by the right tea budget someone could stick with only curated, high level versions of teas but even a limited degree of trying out different sources would bring up variation in tea quality and aspects range.